Fischer pointed to this Friday’s employment report as one of the main data points that the Fed uses to measure economic health.  He said that the U.S. economy is close to full employment, despite the slowing pace of the expansion, as the “problem is largely about productivity growth, something which is very hard to control by policymakers.  It depends enormously on what private individuals are doing at their companies, and it’s very slow at the moment.”  Still, he expects technology to boost productivity growth in the future. 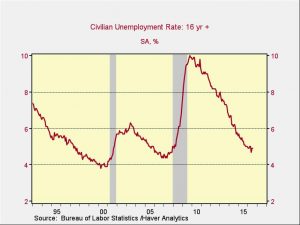 At the same time, earnings growth is forecast to remain slow, rising 0.2% in August.  Additionally, the rate of part-time workers for economic reasons (shown in the chart below), one of Yellen’s favorite measures of labor market health, has seen some deterioration this year. 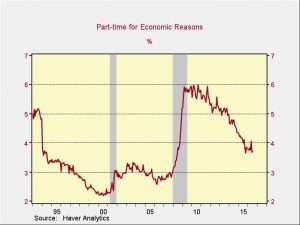 Thus, although a September hike remains a one-in-three possibility, it is looking more likely than previously perceived by the market.  Still, a September hike would be risky ahead of the elections and Chair Yellen’s Jackson Hole interview was considered mildly dovish, so it is not clear whether she would support a hike this fall.