Risk-on has returned on trade optimism.  Italy has a government.  Brexit thoughts.  Fifty-year T-bonds?  Here are the details and other items we are watching:

China: Equity futures rebounded after China indicated that it would not retaliate against the latest U.S. tariff increases.  That news raised hopes that there may be a cooling in trade tensions.  China also indicated it “hopes the U.S. will create conditions necessary for September talks.”   We have our doubts that this lack of retaliation is a breakthrough.  China is running out of items to apply tariffs to and is probably considering measures other than trade to retaliate.

For example, China indicated yesterday that it would extend its “social credit” system to monitor and manage foreign companies.  The social credit system is an evolving program in China that measures the behavior of Chinese citizens on a number of different scales and assigns them a number that can affect school entries, loans, government services, etc.  By moving to a similar system for companies, Beijing is working to structure a program where it can reward firms for doing what China wants, and punish them for bad behavior, on a systemic basis.  To some extent, all nations monitor firms that operate in their countries, both foreign and domestic.  However, this overt scoring system has Orwellian overtones and is raising concerns among foreign firms operating in China.  In the current environment, it would be expected that China might reward U.S. firms that rebuff American government efforts to enforce trade sanctions.

The Chinese government is reportedly studying the extent to which Chinese technology companies are dependent on U.S. suppliers.  The research apparently aims to gauge whether those firms could withstand further shocks from the U.S.-China trade war.  It could also be used to plan for weaning the companies off their dependence on U.S. technology.  In sum, it’s the kind of thing you would expect to see in an intensifying trade war and a splintering of the global economy into regional spheres.

The Xi government is moving to adapt to a less integrated world by changing its focus on internal growth, especially emphasizing its major cities.  This is something of a reversal of the policies of recent years which tried to boost growth in China’s interior through direct investment and lending.  The tension between the faster growing and more cosmopolitan coastal regions and the interior have been a feature of Chinese history for centuries.  Typically, China can be rich and divided or poor and united; this policy reversal will likely lead to the former.

Hong Kong: The municipal police department has turned down a permit request for a major new anti-China protest on Saturday near the Chinese government’s liaison office.  The permit request was submitted by the Civil Human Rights Front, which has organized some of Hong Kong’s biggest protests over the last four months.  This event was to commemorate Hong Kong’s rejection of electoral restrictions that Beijing wanted to implement.  Although permit refusals aren’t unheard of in Hong Kong, this one has the potential to stoke anger and prompt an unsanctioned, violent demonstration over the coming weekend.

Japan: Bank of Japan board member Hitoshi Suzuki warned in a speech today that any move by the central bank to cut interest rates further would do more harm than good.  Suzuki warned that financial institutions might try to mitigate the pain of lower rates by charging fees on household deposits, as has happened in Europe, and he said that could cool consumer sentiment.  He also said excessively low interest rates could discourage banks from lending, which would offset the benefit of any policy easing.

South Korea: The finance ministry’s proposed budget for the next fiscal year would boost spending by a whopping 8%, even after considering the stimulatory supplementary spending added to this year’s budget.  The stimulus, which is its biggest since the Global Financial Crisis a decade ago, is designed to counter the headwinds from weaker economic growth abroad and the U.S.-China trade battle.

United States-Japan-South Korea: In an exceedingly rare development, the South Korean government has summoned the U.S. ambassador in Seoul and demanded that the U.S. butt out of the Japan-South Korea dispute over Tokyo’s behavior before and during World War II.  That dispute itself is a symptom of the U.S. backing away from its traditional role as global hegemon.  Along with Seoul’s failure to give the U.S. advance warning of its recent withdrawal from an intelligence-sharing program between Japan-South Korea, the castigation of the U.S. ambassador amounts to a significant slap in the face that would have been hard to imagine at the height of U.S. hegemony a couple of decades ago.

Italy: We have a government!  President Sergio Mattarella offered Giuseppe Conte a renewed term as prime minister with the support of the center-left Democratic Party and the left-wing, anti-establishment Five Star Movement.  If Conte is confirmed by the parties, it would leave former Deputy Prime Minister Matteo Salvini and his right-wing populist League party out of power.  The move is positive for Italian assets, in particular, and European assets, in general, but we remain skeptical that the two new coalition partners can maintain peace among themselves for very long.  However, there was a clear relief rally in financial markets.

Italian bond yields fell sharply, and the spread against German bunds narrowed.  This news does reduce the risk of a Eurozone crisis emanating from Italy, at least for the time being.

Brexit: Yesterday, we reported on Queen Elisabeth approving PM Johnson’s request to prorogue Parliament until mid-October in a bid to shorten the time between their return and the Brexit deadline.  This action will make it very difficult for Parliament to block the U.K. exit from the EU.  This move by the PM seems to increase the odds that there will be a “hard Brexit,” a crashing out of the EU.  To paraphrase Sherlock Holmes, the “dog that didn’t bark” is the GBP.  It did weaken a bit but did not make new lows on the news.  There are a couple of reasons why.  First, it’s possible the currency is so cheap that it may not have much room to decline further. 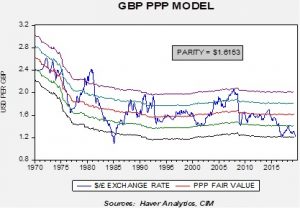 This chart shows our purchasing power parity model, which values exchange rates based on relative inflation.  As the chart shows, the pound is deeply undervalued, approaching two standard errors below fair value.  Although we have speculated that we might test the 1985 lows, putting the GBP around $1.09, the lack of selling on what should be bearish news may be signaling the worst is over.  Second, the markets may be taking a more nuanced view of Brexit; although there will be disruptions, they may not be as dire as predicted and being short here, at such a “cheap” level, could leave one vulnerable to a short-covering rally.  It’s still too early to tell, but if the exchange rate holds in the face of this current turmoil then we may be reaching a bottom.

Argentina: With the country on the verge of its ninth sovereign default, Finance Minister Hernán Lacunza said the government will ask its creditors to accept delayed repayment on some $101 billion of debt.  The request would apply to approximately $7 billion of short-term local debt, $50 billion of long-term private debt held mostly by foreigners and $44 billion of debt from the IMF.  Lacunza claimed the move was driven merely by liquidity issues, rather than a solvency problem, but the debt may actually be untenable given the steep drop in the peso since President Macri’s primary election defeat in early August.

Century bonds?  Treasury Secretary Mnuchin indicated yesterday that the Treasury is considering ultra-long bonds.  Given the low level of interest rates, issuing such bonds makes sense.  But, an added benefit from this move is that it would likely steepen the yield curve.

Odds and ends: Mnuchin also indicated that his department is not considering dollar intervention at this time.  Chairman Xi is planning to deliver a major address in early October to mark the 70th anniversary of Mao’s takeover of mainland China.  GOP senators would like to open hearings on Bill Dudley’s op-ed to question whether the Fed is acting to affect election outcomes.  Recent polls suggest that more voters are seeing economic deterioration compared to expansion, an ominous sign for President Trump’s re-election.

In the details, U.S. crude oil production rose to a new record, up 0.2 mbpd to 12.5 mbpd.  Exports rose 0.2 mbpd, while imports declined 1.3 mbpd.  Refinery operations fell 0.7%.  The large drop in stockpiles was mostly due to the decline in imports.

This chart shows the annual seasonal pattern for crude oil inventories.  Seasonal factors clearly fell hard this week and are now well below the seasonal trough.  However, the summer driving season is rapidly coming to a close, so further inventory declines of significance are unlikely.

Based on our oil inventory/price model, fair value is $64.93; using the euro/price model, fair value is $50.22.  The combined model, a broader analysis of oil prices, generates a fair value of $54.51.  We are seeing a clear divergence between the impact of the dollar and oil inventories.  Given that we are nearing the end of the summer driving season, the bullish impact of inventories will likely diminish in the coming weeks.  A sideways to lower price path is the most likely outcome.

On the geopolitical front, there may be a division developing between President Trump and other members of his administration.  The president has indicated he wants to talk; SoS Pompeo doesn’t seem to be on the same page.  Neither does John Bolton.  Overall, we would bet on the president; his long-term goal is to avoid entanglements in the Middle East and he wants a new deal with Iran but not regime change.  Any thaw with Iran would tend to weaken oil prices.  At the same time, Israel is stepping up attacks on suspected Iranian proxies in a bid to prevent Iran from arming these groups.  These attacks carry the potential for escalation.

President Andrés Manuel López Obrador is reportedly backtracking on his opposition to private-sector participation in the country’s energy sector.  Next year, according to a senior official, the government will once again allow private companies to bid for energy exploration rights in the Gulf of Mexico, and the president will allow state oil company Pemex to resume joint ventures with private companies, as provided for in a 2013 energy reform that the president has criticized.  Increased private-sector participation is probably essential to reversing Mexico’s continuing oil production decline, so the news is certainly positive.  However, López Obrador’s behavior to date still suggests some risk to property rights, the sanctity of contracts and private enterprise under his leadership. 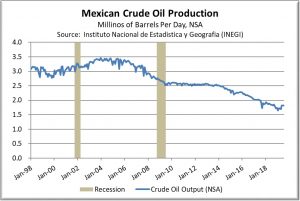