[Posted: 9:30 AM EDT] The long anticipated Jackson Hole conference came and went.  Chair Yellen’s speech was initially taken as dovish, but comments from Vice Chair Fischer sent financial and commodity markets into a significant reversal when he indicated that two hikes may be possible this year.  We see the change in fed funds futures.  The market had the odds of a September rate hike at nearly zero after Brexit.  They are now at 44% with a 67% likelihood in December.  Yellen did note that the labor market is approaching the U.S. central bank’s target but also seemed to imply the Fed has time to wait before moving rates higher.  Fischer’s comments changed the tone of the meeting, turning it into a hawkish event.

In watching the market reaction, we note that there are clear worries about a near-term hike; however, expectations for the terminal rate remain low. 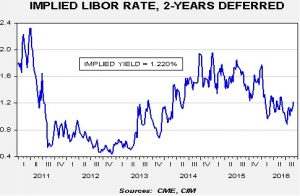 This chart shows the implied three-month LIBOR rate from the two-year deferred Eurodollars.  When Ben Bernanke opened the topic of tapering in May 2013, rates started a steady climb, reaching nearly 2% by H2 2014.  However, the projected LIBOR rate has steadily declined following last December’s rate hike.  We believe this indicates the markets are expecting a lower fed funds rate in the future.

Here’s another way of looking at the data. 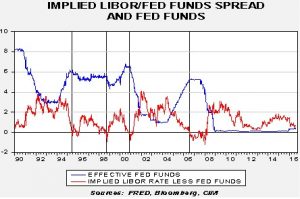 This chart shows the weekly effective fed funds rate with the spread between the two-year deferred three-month Eurodollar futures and fed funds.  Note that the FOMC usually stops raising rates when the spread reaches zero.  The current spread has narrowed from nearly 190 bps in late 2014 to the current 68 bps.  That means if the implied LIBOR rate remains steady, we are probably looking at two to three hikes in total.

Tighter policy will have an impact on the financial and commodity markets.  We are already seeing an upward move in the Treasury curve, although it is also flattening.  Gold and other commodity prices, along with emerging markets, are weakening.  The dollar is strengthening.  Equities are holding up fairly well, but the short-term uptrend has stalled.

We note that BOJ Governor Kuroda was at Jackson Hole suggesting that more stimulus is coming.  Although there are grave doubts as to what the BOJ has left in terms of policy support, direct financing of fiscal spending is possible.  And, the BOJ could implement QE by purchasing U.S. Treasuries, although that would cause a firestorm of protests.

Canadian PM Trudeau is heading to China to talk trade with General Secretary Xi.  Saturday’s NYT discussed at length comments from Chinese nationals and Canadians of Chinese descent who face public criticism and worse for pointing out human rights problems in China.  According to reports, the Xi regime is putting pressure on Western governments to restrict criticism.  We also note that some activists have faced cyber-attacks and threats of physical harm.  Canada, like the U.S. and Australia, has been a prime destination for Chinese capital flight.  However, if Canada begins to muzzle Chinese political dissent in a bid to gain export markets, we would look for the Chinese (and their capital) to look for other places where their free speech will be protected.

The German economy minister, Sigmar Gabriel, said over the weekend that the Trans-Atlantic Trade and Investment Partnership, or TTIP, is dead.  Gabriel noted that after 14 rounds of talks, not one item of the 27 chapters of the proposed trade agreement was accepted by both sides.  TPP is barely viable; both U.S. presidential candidates have disavowed it and its only chance is to be passed in the lame duck session after the November elections but before inauguration.  Even then, the odds are long.  Retreating from these trade deals will have important geopolitical ramifications but, in the current political environment, free trade has lost its allure.