A deal with Mexico: Although it wasn’t a huge surprise, it does appear the U.S. and Mexico have a trade agreement.  The overall details are as follows:[1]

Perhaps the best way to frame this agreement is to think about the economy differently.  One of the most powerful concepts in economics is supply and demand.  Because it’s so powerful, it tends to shape broader thinking about the economy and markets.  Thus, there is a tendency to separate consumers from capital and labor, the idea being that the latter two represent the supply side while the consumers represent the demand side.  In reality, we are usually either capital or labor, depending on how we get paid, but we are all consumers.  Throughout history, there is an interplay between the three that tends to be unrecognized by economics.  In our estimation, capital tends to get its due share in capitalist economies, to a greater or lesser extent.  Only under socialist or communist structures is capital at a disadvantage and history tells us that capital tends to suffer the “tragedy of the commons[2]” in these systems because of social ownership.  In other words, if no one has complete ownership of capital, it tends to be neglected and thus deteriorates.  In capitalist economies, capital always gets a share and the real vacillation of power is between labor and consumers.  If a society wants to support labor under capitalism, consumers usually suffer.  As the 1960s and 1970s often showed, creating high-paying, low-skilled jobs (which required protection through collective bargaining and from foreign competition) led to consumers paying a lot for shabby products.  But, globalization and improving the lot of consumers by reducing labor’s power hurt labor, who were also the bulk of consumers.  It appears to us that the administration is trying to redress the relative weakness of labor with this agreement with Mexico, which we assume will become the blueprint for negotiations with most other nations.  That will likely lead to higher wages in some industries and bring higher inflation.  This is a trade-off we have been anticipating for some time; the rise of the populist left and right is directly related to the policies of deregulation and globalization of the late 1970s that favored capital and consumers.  These policies clearly led to lower inflation but the relative impoverishment of the working classes.  The last two presidents won by offering voters the idea that they would reverse this trend.  This new trade agreement is part of this goal.

So, what happens now?  Canadian negotiators are coming to Washington to start talks.  The most likely outcome is that Canada and the U.S. will strike a similar agreement.  It should be remembered that NAFTA was never really a North American agreement—it was a U.S./Canada and U.S./Mexico agreement.  A simple observation of Mexican/Canadian trade relative to the U.S. makes this clear. 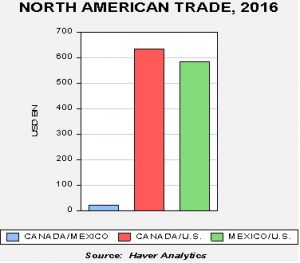 As this chart shows, trade between Canada and Mexico is dwarfed by each nation’s trade with the U.S.  Thus, negotiating two separate agreements, even if they are called NAFTA, makes sense.  We expect Canada to come to a deal with U.S. negotiators.

The bigger question is what does this mean for Trump’s future trade policy?  If this agreement does become a negotiating blueprint, it is good news because it means the U.S. isn’t necessarily embarking on blowing up the global trading system.  This is why equities treated the news of a deal so warmly yesterday.  Instead, the president appears to be trying to tip the scales for American industrial workers.  This is tricky because sometimes helping some industries disadvantages others.  But, some correction from what has been in place for nearly 30 years should not be a huge surprise.  We would expect the EU to observe what has transpired with Mexico and the U.S. and shape an agreement with the administration.  The greatest uncertainty surrounds China.  It isn’t clear if the U.S. simply wants a deal with China or if the goal is to use trade as a tool of geopolitical dominance.  We would lean toward the latter; keep in mind that TPP was designed to isolate China and force it to comply with TPP rules.  Thus, we would be a bit surprised by a deal with China; instead, we look for increasing tensions.

An attack on social media and search engines: In a tweet[3] this morning, President Trump accused Google (GOOGL, 1256.27) of bias.  Concern over bias is nothing new; other social media firms have faced similar accusations.  Social media firms are scheduled for hearings on September 5.[4]  This isn’t a position the tech media firms wanted to find themselves in; for years, they argued they were merely platforms and not journalists or media firms, and thus didn’t deserve scrutiny.  This position has become increasingly difficult to defend as various actors, including foreign ones, have “weaponized” social media for their own ends.  Although we don’t expect anything to happen in the near term, eventually these firms will face increasing regulation that could undermine their business models.  The best book on this issue is The Four by Scott Galloway, which we have reviewed.[5]

The next ECB president: Mario Draghi’s term in office ends on Halloween 2019.  Although that is still a ways off, there has been some position jockeying for some time.  A leading candidate has been the head of the Bundesbank, Jens Weidmann.  Weidmann has been critical of the ECB’s actions to stabilize the Eurozone economy, including QE.[6]  According to reports, Chancellor Merkel is leaning toward supporting a German for European Commission president.[7]  Since it would be likely impossible to get the EU to support a German for two of the top posts in the EU, it looks increasingly like Weidmann will be sidelined.  If this trend continues, the ECB leadership post is wide open.  According to reports, a number of potential candidates have emerged.[8]  However, it should be noted that none of the projected candidates are from the southern tier nations and most are considered rather hawkish.  We would bet on the Finns getting the nod.

North Korea: We have seen relations move from hope to concern.  Last week, President Trump announced that his secretary of state would not be traveling to Pyongyang after all, blaming the lack of progress in talks.  Although this nation has been on the backburner of our attention recently, conditions are deteriorating again.  North Korea is still negotiating with South Korean President Moon, raising the potential for “daylight” between U.S. and South Korean policy.  North Korea has also accused the U.S. Special Forces and Japan of conducting exercises in the Philippine island of Luzon, which is roughly like launching attacks on North Korea from Okinawa.[9]  At the same time, there are other reports coming from North Korea suggesting the recent deterioration in relations isn’t because of President Trump or Secretary of State Pompeo; instead, the blame is being assigned to John Bolton and Congress.[10]  The reports about dissention within the U.S. as the cause of tensions with North Korea may be due, in part, to uncertainty about the future path of talks.  If Kim were purely “playing” the U.S., he would do something aggressive, like launch a missile, and go back to the pre-summit situation.  The fact that this discussion is out in the open may mean that North Korea does want negotiations to move forward but doesn’t want to look foolish if nothing comes of them.  At this point, we don’t really know, but a personal gesture toward Trump might be required if Kim wants something to happen.

The king killed the IPO:The crown prince of Saudi Arabia was working on the Saudi Aramco IPO not only to raise revenue for economic restructuring but also to open up Saudi society.  According to reports, his father, King Salman, decided that too much transparency could lead to trouble.  Thus, he killed the deal.[11]  This development bears watching.  Since becoming king, there have been reports that King Salman wasn’t quite “all there” and his son, the crown prince, was really in control.  And, up until this point, all signs supported that idea.  Crown Prince Muhammad bin Salman (MbS) acted with what appeared to be complete freedom, conducting a war, cracking down on “corruption” and announcing long-term investment plans.  That isn’t to say that MbS didn’t face corrections from his father.  The king opposed the U.S. recognition of Jerusalem as Israel’s capital after MbS had seemingly approved the plan.  But, as noted, the king gave his son a lot of leeway in policy.  According to Reuters, the king may have become concerned about public scrutiny of Saudi Aramco and how that would reflect on the royal family.  We will be watching for more evidence that MbS may be slipping from the king’s favor.