[Posted: 9:30 AM EDT] It was a busy weekend of news.  Our thoughts and prayers go out to our friends in Texas.  Here’s what we are watching:

Harvey: TS Harvey made landfall going into the weekend as a category 4 hurricane.  Usually, hurricanes make landfall, move inland and dissipate within a couple of days.  Harvey isn’t that kind of storm.  First, instead of moving inland, the storm stalled over the Houston-Corpus Christi area and sat there, dumping prodigious levels of rainfall.  Complicating matters is that Harvey is expected to return to the GOM later today to gather more moisture.  Rainfall totals in excess of 40” are expected over parts of the Houston area, with the rain spreading into Louisiana.  Here we discuss some of the key effects on energy and the economy.

Energy: The Houston Ship Channel is perhaps the energy center of the U.S.  The area is loaded with refiners, pipelines, import and export facilities and offshore production.

Current estimates indicate that about 3.0 mbpd of refining capacity have been taken offline.  Some of these facilities will be back within a few days (on the above map, each box is a refinery), but the ones in Houston could be down for weeks.  A rough calculation of the Houston refineries[1] indicates that 2.3 mbpd, or about 13% of total U.S. capacity, will be idle for weeks.  This loss of refining capacity has several effects on oil prices.  On the one hand, the loss of refining capacity will reduce demand.  On the other, the Eagle Ford production area is relatively close to the rain bands and there are reports that some areas have been shut in.  This production area represents about 1.3 mbpd. 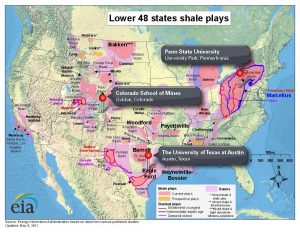 In addition, the Houston Ship Channel and the Louisiana Offshore Oil Port are the key oil import facilities and thus we would expect a decline in oil imports.

The market reaction thus far is declining crude oil prices, while gasoline prices are higher.  This has widened the crack spreads (the spreads between product and crude oil).

The chart above shows the spread between a barrel of gasoline versus a barrel of WTI.  The spread has jumped over $2 per barrel.  The spread between Brent and WTI has also widened over $2.00 per barrel (see below).  The widening of Brent-WTI will tend to discourage imports to the U.S. and, if the oil can be shipped, U.S. exports.  Unfortunately, the port outages in Texas will tend to dampen oil exports (and imports).

Overall, so far, we believe the impact on oil prices is probably a bit overdone; in the end, there are crosscurrents that will probably end up being more of a wash.  For refiners outside the Houston/Louisiana area, this event should be bullish.  That is the highest probability outcome.

The Economy: The economy will also be affected by this disaster.  Initially, the impact is negative.  Houstonians will be out of work for a while, which will boost initial claims for unemployment.

This chart shows initial claims around Hurricane Katrina.  There was a spike in claims of about 100k during that event.  Harvey may actually be larger.  The impact isn’t permanent; within about a month it dissipates.  As time goes on, the impact of rebuilding will be positive for GDP.  Although the impact on the nation’s wealth, in terms of lost infrastructure, means the U.S. balance sheet takes a hit, the “income statement,” or GDP, actually rises to rebuild what has been lost.

The rise in claims may lead the FOMC to hold off on rate hikes until the situation improves.  This factor, coupled with the potential for a government shutdown/potential default by the end of September, will almost certainly leave rates unchanged.  We will likely still see a reduction in the balance sheet.

Bring me tariffs!  Axios is reporting that President Trump is angry at the globalists surrounding him and wants tariffs.[2]  There is movement on trade; NAFTA renegotiations are underway and the U.S. is investigating Chinese IT trade practices.  However, the president has promised tariffs to the populists and he wants to provide them.  Tariffs have been falling since WWII, replaced mostly by non-tariff barriers, e.g., regulations, trade inspections, etc.  The president actually has a good bit of freedom in setting tariff policy and can move without much influence from Congress (although we do note Mike Lee (R-UT) has proposed legislation to curb the president’s tariff powers).  The problem with tariffs is that they are transparent and invite retaliation.  For example, if China sees its steel or solar panels affected by tariffs, one can fully expect retaliation against U.S. agriculture.  Perhaps the most effective tool has already been locked away—the Border Adjustment Tax would have likely been effective in reducing the trade deficit, although at the cost of higher inflation and a stronger dollar.  On the other hand, if the president is seeking lots of signing ceremonies, tariffs have that characteristic.

Jackson Hole: Perhaps the most important item from the meeting is what wasn’t said; ECB President Draghi didn’t directly come out and call for a weaker EUR and the Eurozone currency jumped to new highs.  In current central bank practice, it is considered improper to directly discuss the exchange rate.  And, with a U.S. president inclined to trade barriers (see above), talking down the currency would have likely triggered a reaction from the White House.  Still, the expectation is that the ECB is slowly moving to tighten and the FOMC probably won’t move as much as expected.  This is leading to a weaker dollar.