Good morning!  After several days of stomach-turning gyrations, things are rather quiet this morning.   Here is what we are watching:

Italy:  Today is the deadline day for the center-left and populist-left to try to cobble together a coalition.  The news is mixed.  On the one hand, it does appear that talks have progressed in a favorable manner.  However, the squabbling is continuing and still could upend a deal.  We are leaning toward a new coalition outcome, for no other reason than the League is so hated by the other parties that keeping it out of government is enough to hold a disparate group together.  A coalition that excludes the League will likely narrow the spread between Italian and German sovereign yields.  However, we would not expect it to hold together for more than a year.

Let’s talk:  After exiting the JCPOA in May 2018 and applying crippling sanctions on Iran, President Trump is signaling that he is open to a meeting.  Our read is that the more moderate elements in the Iranian political system are open to talking, but the hardliners are strongly opposed.  Iran’s response is that if sanctions are lifted, they will talk.  Which, for now, is a non-starter.

However, we are seeing one interesting development on President Trump’s openness to a meeting.  Israel is getting nervous.  Although the leaders of the two nations have close and warm ties, Israel can’t help but notice that this U.S. administration is willing to engage in diplomacy that may put allies in a difficult position.  Japan is a case in point.  The U.S. is making it clear that it will tolerate North Korea’s nuclear and missile program as long as it doesn’t threaten the U.S. mainland.  That gives little comfort to Tokyo.  Israel rightly fears that its interests could be harmed if the U.S. and Iran make a deal.  We have noted recently that Israel has increased its military strikes in the region.  It’s possible it is taking these actions on concerns that if a deal between Iran and the U.S. develops, Iran will recover.  Thus, these strikes may be seen as opportunistic.

Trade:  The whipsawing on trade with China is dizzying.  After suggesting that his only regret about increasing tariffs was that he didn’t raise them enough, the president seemed to back off from his comments and, in Pavlovian fashion, equity markets rallied.  With all this volatility, it is hard to discern what path makes sense.  Here is one idea; the U.S. can either engage in a trade war with China or enjoy stronger economic growth.  However, it may not be possible to do both.

One of the items taught in the first week of an introductory economics course is the production possibility curve.  The point of the exercise is to show that, at full utilization, there is a trade-off in what can be produced.  Essentially, the curve illustrates the concept of opportunity cost; if an entity chooses a certain objective, it probably means that it will forgo other goals, which become a “cost” to that choice.  All presidents (or for that matter, all people) want to believe they are “inside” the curve, meaning they can get more than two goals.  The notion of “having it all” is about being inside the curve.  What we find in reality is that, most of the time, we are on the frontier and getting more of one thing means losing something else.  That is likely where we are on the trade issue with China.  If the goal of reducing our economic entwinement with China is to be fostered, it will almost certainly have a negative impact on U.S. growth, at least at first.  Reducing our ties to China may be a worthwhile goal, but it doesn’t come without costs.

Slow Germany:  German GDP contracted in Q2 by an annualized 0.3%. 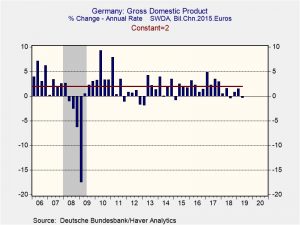 The decline was modest but, as the chart shows, growth hasn’t exceeded 2% since Q4 2017.  Although, on its face, the data doesn’t look too bad, the underlying data is worrisome.  Final domestic demand, excluding inventory accumulation, fell 2.8%; simply put, the overall GDP number was boosted by strong inventories which won’t continue.  Despite these weak numbers, the head of the Bundesbank, Jens Weidmann, opposes new stimulus.  A slowing German economy will undermine overall EU economic growth.

Norway:  In spite of the relatively higher valuation of U.S. stocks, and prospects for a depreciating dollar, central bank officials managing Norway’s $1 trillion sovereign wealth fund have recommended removing the fund’s current over-weight position in European equities.  Instead, they recommend moving toward an index-weight allocation with about 19% of their equity holdings in Europe (from 34% currently) and 57% in North America (from 40% currently).

Japan-South Korea:  The U.S. Department of State has warned that last week’s decision by South Korea to exit an intelligence-sharing pact with Japan will endanger U.S. troops stationed on the Korean Peninsula.  The decision by Seoul was part of its ongoing dispute with Japan over its behavior before and during World War II.  For decades after the war, when the United States fully accepted its position as a global hegemon, it worked to keep that dispute under wraps in the interest of allied security.  The warning by the State Department shows the kinds of danger that could now arise as the United States steps back from embracing its role of hegemony.

Brexit:  PM Johnson didn’t change minds among the EU members.  Parliament is investigating ways to prevent a no-deal Brexit, but no one has found momentum for a single plan.  However, there is one glimmer of hope; a group has created a plan that would avoid the backstop but allow for checks on goods to flow.  According to this group, it has garnered interest.  If the backstop issue could be resolved, the potential for a non-disruptive Brexit would improve dramatically.

India:  Although we’ve talked a lot about President Trump’s pressure on the Federal Reserve, it’s important to remember that aggressively nationalist and populist leaders around the world are also impinging on their central banks’ independence.  The latest example is in India, where the Reserve Bank of India gave in today to Prime Minister Modi’s demand that it transfer $24.8 billion in dividends and “surplus capital” to the government.  Former RBI Governor Urjit Patel was sacked precisely for refusing this demand.  The raid on the central bank comes as reports suggest the government is getting cold feet on its planned $10 billion foreign currency bond.  In July, the Modi government said it would issue the bond in order to diversify its funding sources and take advantage of historically low interest rates.  However, with the influx of funds from the central bank, it now appears Modi could forgo the issue and avoid the negative consequences that might arise if the dollar continues to appreciate, in spite of our belief that it should be falling. India has traditionally shied away from foreign currency obligations, which has helped it avoid the financial crises that often plague emerging markets.