[Posted: 9:30 AM EDT] All eyes are focusing on the Grand Tetons as the KC FRB’s annual meetings start in Jackson Hole tomorrow.  Although the market’s focus is all about the timing of the next rate hike (fed funds futures indicate over 50% probability for the December meeting, 30% for September), the discussions at the meeting seem to be all about the Fed’s toolkit for managing future policy.  Specifically, the participants want to signal what they will do in the next downturn and the consensus is that QE, ZIRP and forward guidance will be the tools, while NIRP will probably be avoided.  Although there is much anticipation of Chair Yellen’s speech, we doubt she breaks new ground and so we would look for some disappointment at the lack of clarity that will emerge.

This chart shows current crude oil inventories, both over the long term and the last decade.  The usual seasonal inventory draw, which is more evident in the chart below, is coming to a close. 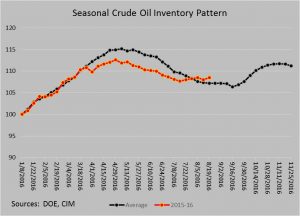 The seasonal pattern is due to the refining cycle.  This reporting week, on a five-year average basis, is the last week before operations begin to slow.  This means that oil demand is set to decline. 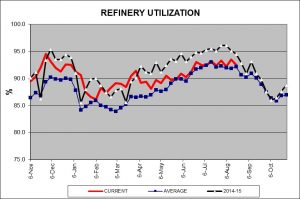 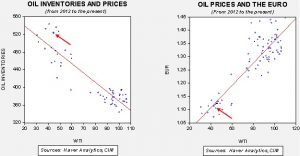 Based on inventories alone, oil prices are profoundly overvalued with the fair value price of $35.72.  Meanwhile, the EUR/WTI model generates a fair value of $49.16.  Together (which is a more sound methodology), fair value is $42.53, meaning that current prices are a bit rich.  Although the market has put great hope on an OPEC deal next month, the plan looks to be more like jawboning the market higher.  We note that Iran has confirmed it will send its oil minister to the September meeting in Algiers, which may keep prices elevated into the meeting.  On the other hand, oil markets tend to trade in ranges, and the oral intervention by OPEC members did put a $40 floor in place.  That floor could be tested in the coming weeks as crude oil inventories rise; without a weaker dollar, oil prices will likely ease toward the $40 floor.

Bloomberg is reporting that Saudi Arabia is planning to raise $10 bn in bonds denominated in USD, its first dollar bond.  The kingdom is planning to make the offer after the September FOMC meeting.  In other Middle East news, Turkish armored troops, supported by U.S. air support, have successfully ousted IS forces from Jarablus.  Turkey has been concerned about Kurdish expansion and informed Kurdish forces that they need to remain east of the Euphrates River.  Jarablus is on the river.  Although the Obama administration welcomed the Turkish incursion, it probably had more to do with containing the Kurds than ousting IS.  Pentagon officials have indicated that four Iranian patrol boats approached the U.S.S. Nitze, a guided missile destroyer, in the Strait of Hormuz.  The Iranian vessels reportedly approached the U.S. ship at a high rate of speed.  Iran is claiming the U.S. ship was in Iranian waters; the U.S. contends it was in international waters.