[Posted: 9:30 AM EDT] Iran strikes back: Saudi Arabia’s plan to isolate Iran may have backfired.  The WSJ reports that Qatar has decided to restore diplomatic and bilateral trade ties with Iran despite pressure from the Gulf Cooperation Council (GCC), a coalition of Arab countries that also includes the United Arab Emirates, Bahrain and Egypt.  Earlier this year, Saudi Arabia and the other members of the GCC decided to cut off all diplomatic ties and impose trade and travel bans on Qatar due to its supposed ties with terrorist organizations.  The demands imposed by the coalition not only included curbing ties with Iran, but also shutting down Al Jazeera and expelling extremists from its territory.  Although the blockade has had a negative impact on Qatar, it did little to force the government into submission but rather into the arms of Turkey and Iran.  This outcome will likely strengthen Iran’s reach throughout the Middle East as it attempts to expand its influence in the region.  For decades, Saudi Arabia and Iran have been battling to become the sole regional hegemon in the Middle East.

South Korean war games: Pyongyang has expressed displeasure with the ongoing war games taking place between the United States and South Korea.  North Korean officials have complained that the exercises are just “rehearsals for an invasion” and have threatened to provide a relevant response.  War games between the U.S. and South Korea occur annually and are designed to test war readiness.  In June, Beijing proposed a “double freeze” scenario in which North Korea would cease its nuclear and ballistic missile tests in exchange for the U.S. halting its war games; the deal was promptly rejected by Washington.  Tensions have simmered between Pyongyang and Washington as the U.S. has been successful in applying sanctions on North Korea to curb its nuclear and ballistic missile program.  The war games are scheduled to continue until next Thursday.

This chart shows current crude oil inventories, both over the long term and the last decade.  We have added the estimated level of lease stocks to maintain the consistency of the data.  As the chart shows, inventories remain historically high but have been declining.  In fact, inventories are now at their lowest level since mid-2015.

As the seasonal chart below shows, inventories are usually approaching the end of the inventory withdrawal season.  The usual decline is about 10% from April to September; this year is about the same but on a lower level.  Overall, this has been a good withdrawal season and does suggest that the supply situation is tightening. 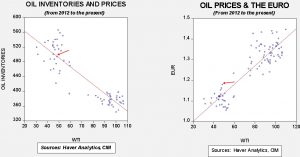 Based on inventories alone, oil prices are overvalued with the fair value price of $53.30.  Meanwhile, the EUR/WTI model generates a fair value of $64.03.  Together (which is a more sound methodology), fair value is $60.51, meaning that current prices are below fair value.  Fears of continued excess supplies are weighing on market sentiment, but it appears to us that oil prices are rather undervalued.