[Posted: 9:30 AM EDT] Late summer doldrums are upon us.  Financial markets are quiet; the VIX is falling as investor fears dissipate.  About the only concern out there is Fed policy.  As we noted yesterday, Chair Yellen speaks on Friday.  She is not taking questions and her topic is on the toolbox the central bank has to operate policy.  Although there is ample room to become restrictive by raising rates, the concern is what will the Fed do if the economy rolls over?  With the policy rate just off zero, the Fed would hit ZIRP in short order.  A recent paper from the FOMC’s staff economists suggests that the U.S. central bank will resume QE and forward guidance if it needs to stimulate but will likely avoid negative interest rates.  We doubt Chair Yellen will deviate much from this script.  Broader questions about long-term growth and inflation prospects will probably be dealt with in only the broadest of terms.  The Fed could consider changing its inflation target, as San Francisco FRB President Williams suggested last week, but we would expect Yellen to intimate that although this is a possible response, it carries risk and would only be done after ample consideration.

There was some interesting news on the FOMC front in the minutes that we missed in earlier comments.  Eight of the 12 regional banks requested a discount rate hike.  It should be noted that the nature of the discount rate changed in 2002.  Prior to the regulatory change, the discount rate was lower than fed funds.  The former was designed as an emergency rate for a bank in trouble; banks that were OK simply used fed funds.  There was a stigma attached to borrowing at the discount window as it signaled the bank was in trouble.  Thus, it was decided that the discount rate would be used as a penalty rate to give banks incentives to use fed funds.  With the banking system drowning in excess reserves, the need to borrow at the discount window is low.  However, the fact that eight regional banks voted to lift the rate does suggest growing sentiment among the presidents to lift the fed funds target.  Yellen may be forced to allow a hike sooner than we (and the market) have been anticipating.  We note that there were nine votes to raise the discount rate at the November FOMC meeting last year, and the rate hike occurred at the next meeting. 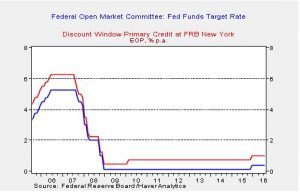 Finally, on a geopolitical note, Turkish armored units have crossed the border into Syria, supported by Turkish and U.S. air assets.  Ostensibly, the attack is on IS but it does appear that the operation is also designed to push Kurdish elements out of the area.  At the same time, the area around al-Hasakah has been ceded to the Kurds.  According to the NYT, the Assad government has declared a ceasefire with the Kurds in this northeastern region of Syria.  The regions are indicated by the boxes below.

We suspect the Obama administration is coordinating with Turkey against some Kurdish elements as a way to maintain relations with Erdogan.  Also of note, Stars and Stripes is reporting that Turkey is “open” to allowing Russian warplanes to operate from Incirlik air base, the same base the U.S. has used for years for Middle East operations.  It should be noted that some 50 U.S. nuclear warheads are on this airbase.  Although it isn’t getting much press, Russian influence in the Middle East is growing and Turkey is becoming a less reliable U.S. ally.