[Posted: 9:30 AM EDT] Trump attacks Washington and the media: President Trump made his first major speech on immigration yesterday in Phoenix, Arizona, during which he placated his base by threatening to shut down the government if the border wall isn’t funded, alluding to a withdrawal from NAFTA and attacking the media.  His speech will likely heighten tensions within the GOP as it appears the president is willing to protect his base at all costs even if it means challenging members of his own party.  In recent weeks, Republicans have become increasingly concerned with the president’s handling of domestic events and many have expressed reservations about funding a border wall due to the impact it may have on the national debt.  His threat to shut down the government appears to be a rebuke of Mitch McConnell, who stated earlier this month that there was a zero percent chance of that happening.  Trump’s speech will likely increase the rift in his relationship with McConnell, which reports suggest was caused by the failure to repeal Obamacare.

Soft power diplomacy: Trump’s foreign policy shift seems to have taken root with increased actions against China, Russia and Egypt.  Yesterday, the WSJ reported that the U.S. Treasury has expanded its sanctions to firms in Russia and China due to their involvement in Pyongyang’s nuclear and ballistic missile program.  The escalation of sanctions is aimed at forcing North Korea to the negotiating table.  Additionally, the Washington Post reported that the State Department is going to withhold $195 million in military aid from Egypt and has also withdrawn $96 million in other aid due to human rights violations in the country.  The shift in diplomacy reinforces speculation that the military establishment’s influence has grown in the Trump administration; as a result, we expect the president’s foreign policy to resemble those of his predecessors, President Obama and President Bush.

Yesterday’s market action: The dollar rallied as did equities.  For the past several months, the dollar has tended to weaken during periods of U.S. political dissention and strengthen on evidence of policy stability.  Dollar sensitivity to political uncertainty is rather unusual. 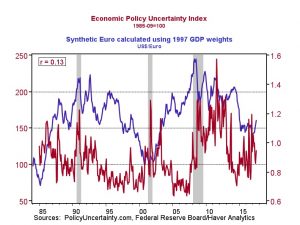 This chart shows the economic policy uncertainty index compared to the EUR.  The two series are essentially uncorrelated.  The behavior we saw yesterday has been something we have noted recently.  Investors have generally not been willing to sell equities in the face of turmoil but have sold the dollar instead.  Both the dollar and equities rallied strongly after President Trump’s disciplined and well delivered speech on Monday regarding the war in Afghanistan.  However, we noted lots commentary suggesting that the president has moved on from populism, citing the speech and Steve Bannon’s exit from the White House.  However, the president seems to have a “soft spot” for populist ideas.  Simply put, although it is possible that the president has moved to become an establishment Republican, it’s unlikely that he has changed.  Thus, the potential for more market uncertainty remains.

The Navy puzzle: The U.S. Navy has been hit with a series of mishaps this year. In January, the U.S.S. Antietam ran aground near Yokosuka, Japan.  In May, the U.S.S. Lake Champlain hit a South Korean fishing vessel.  In June, the U.S.S. Fitzgerald hit a container ship, and this week, the U.S.S. John S. McCain struck an oil tanker.  The Navy is reviewing the situation.  Bloomberg[1] notes that one possibility is that the Navy is trying to do too much without enough resources.  From 1998 to 2015, the Navy shrunk by 20% to 271 vessels.  The demand for the Navy’s services may simply exceed the number of ships available to perform the work safely.  However, there is another theory circulating that is much more ominous.  On June 22nd, the Global Positioning Satellite system was manipulated; 20 vessels on the Black Sea reported a location 20 miles inland, near an airport.  This was the first confirmed instance of GPS “spoofing.”  Although the Navy uses encrypted GPS and should be protected, commercial vessels are not and thus could be vulnerable to manipulation.  There is some evidence that Russia may be behind this GPS spoofing; it would be consistent with Russia’s “hybrid war” concept and shows how a nation with much less economic power can “punch above its weight.”[2]