We cover the Fed minutes below!  The G-7 summit is this weekend.  Tensions between Japan and South Korea are rising.  Quietly, overnight, the CNY fell to an 11-year low.  Here is what we are watching:

The Fed minutes: There were three points that emerged from the minutes:

Overall, market reaction was somewhat mixed.  Equity markets took the news in stride.  The most hawkish reaction probably came from the dollar, which rallied after the report.  Bond yields also rose on the report.  Our take is that the minutes were a bit hawkish but the FOMC did try to leave itself room to adjust in the future.  The bottom line, though, is that Powell has his work cut out for him if he wants to take the committee to a more aggressive easing stance.

The financial markets have not changed their opinion in the wake of the report; the deferred Eurodollar futures are still signaling a serious inversion, and are projecting another 90 bps of easing over the next two years. 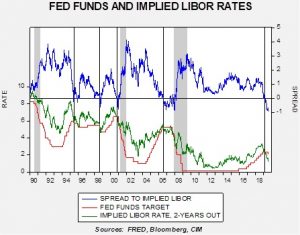 At the same time, the Mankiw Rule is suggesting that the last thing the Fed should be doing is cutting interest rates.  The Taylor Rule is designed to calculate the neutral policy rate given core inflation and the measure of slack in the economy.  John Taylor measured slack by using the difference between actual GDP and potential GDP.  The Taylor Rule assumes that the Fed should have an inflation target in its policy and should try to generate enough economic activity to maintain an economy near full utilization.  The rule will generate an estimate of the neutral policy rate; in theory, if the current fed funds target is below the calculated rate, then the central bank should raise rates.  Greg Mankiw, a former chair of the Council of Economic Advisors in the Bush White House and current Harvard professor, developed a similar measure that substitutes the unemployment rate for the difficult-to-observe potential GDP measure.

We have taken the original Mankiw rule and created three other variations.  Specifically, our model uses core CPI and either the unemployment rate, the employment/population ratio, involuntary part-time employment and yearly wage growth for non-supervisory workers.  All four variations compare inflation and some measure of slack.  Here is the most recent data: 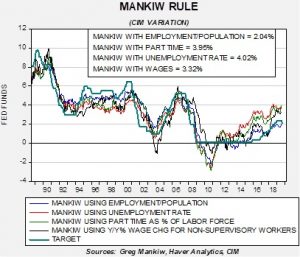 This month, the estimated target rates all rose substantially.  Not only did inflation rise but the labor markets showed strength.  Three of the models, the ones using the unemployment rate, wages and involuntary part-time employment, all rose 20 bps to 40 bps and suggest the last thing the FOMC needs to do is ease.  Even the most dovish model, the variation using the employment/population ratio, rose by 20 bps and is flirting with neutral.  This analysis explains why so many members of the committee are reluctant to support an aggressive easing stance; the basic model that the Fed has used for years is calling for tightening.  Thus, the potential for disappointing the financial markets is elevated.

Jackson Hole: Now that the minutes are out of the way, the market’s focus will shift to the annual meeting in Wyoming.  Powell’s speech at Jackson Hole is scheduled for 10:00 EDT tomorrow, but the “festivities” begin today.  As our discussion of the minutes show, it will be very difficult to create a narrative for further easing that will sway the FOMC.  Greenspan would likely come up with some novel story to carry the day, but we can’t think of any other Fed chair who could pull this off.  Thus, the odds of disappointment are elevated.

South Korea v. Japan: The current spat between these allies centers around the issue of reparations surrounding the colonial period and WWII.  Japan argues that its previous actions have fully satisfied the responsibility for its past.  It’s unlikely that South Korea (or North Korea, for that matter) will ever fully absolve Japan for its past actions.  During the Cold War, the U.S. essentially forced these nations to work together as allies to contain communism.  However, with U.S. influence waning, old tensions are resurfacing.  South Korea has announced it will no longer share classified military information with Japan.

G-7 and Brexit: PM Johnson met with Chancellor Merkel yesterday.  Essentially, Merkel didn’t offer Johnson much, which suggests she would like to see the backstop issue resolved but that it is up to the U.K. to do that.  Johnson will meet with Macron next.  We are starting to see a realization among the pundits that the U.S. will be more than happy to make a free-trade deal with the U.K. after Brexit, but the outcome will likely make Britain a vassal state of Washington.  As noted yesterday, the G-7 won’t even try to issue a joint communiqué, an indication of the deep divisions within the world’s most significant democracies.

Looming tariffs: Although most of the tariffs on China were delayed, some will go into effect September 1.  China warns that new tariffs will raise tensions and vows to retaliate.  The earlier mentioned drop in the CNY is likely part of the response.  In other China news, companies are reporting that pulling supply chains from China is apparently harder than it looks.

Italy: Salvini’s attempts to force new elections may not work out.  For the next two weeks, parties will try to form a government to avoid fresh elections.  The center-left and populist-left parties are trying to form a coalition and elections will not be necessary if they are successful.

Trouble on the farm: My former colleague at A.G. Edwards, Bill Nelson, used to conduct a farm tour that moved through the Midwest corn belts and reported up close and personal on the condition of the crops.  It was an arduous task and fortunately for Bill he doesn’t have to do that anymore.  Pro Farmer is currently conducting a tour and is bringing some USDA officials along for the ride.  Farmers have been upset with the USDA, which has been rather optimistic about the prospects for this year’s crop despite damage caused by an unusually rainy spring and early summer.  These rosy estimates have depressed prices and apparently angered farmers to the point where government officials have been threatened.  Federal Protective Service agents have been dispatched to investigate the incidents.  Farmers are also upset with the administration’s decision to grant ethanol waivers to refiners which reduce demand for corn.

Based on our oil inventory/price model, fair value is $61.72; using the euro/price model, fair value is $50.45.  The combined model, a broader analysis of the oil price, generates a fair value of $53.60.  We are seeing a clear divergence between the impact of the dollar and oil inventories.  Tensions in the Middle East have lessened and we are heading into a weaker demand period; thus, weaker oil prices in the short run are likely.  We do note that Alberta will continue to constrain oil production, although producers are being given a higher production ceiling.

In other oil-related news, Russian oil companies are moving to price oil in euros.  Over the years, there have been nations that have attempted to move away from dollar pricing.  Both Iran and Iraq tried when they were under sanction.  Russia’s decision does make some sense; not using dollars might allow it to skirt U.S. sanctions, which tend to depend on intersections with the U.S. banking system.  However, we doubt this will begin a wholesale shift away from dollar pricing for oil simply because the purchasing power of the dollar is so strong now that not taking in dollars is expensive for most nations.  After Brexit, the U.K. will dramatically reduce its strategic oil reserve.  OECD nations are required to hold oil in reserve as part of a global strategic reserve system designed, in part, to weaken OPEC’s ability to embargo oil and drive the price higher.  However, the EU has stricter rules than the OECD regarding the level of oil required to be held.  When (if?) the U.K. leaves, it will reduce its strategic reserve to the OECD level, which will put around 50 mb out for bid.  This action could lead to lower Brent prices post-Brexit.  The U.S. and Venezuela have been engaged in backchannel talks.  According to reports, Diasdado Cabello has been leading the talks on the Venezuelan side.  A deal would be bearish for oil prices at some point, although it might take years before Venezuela’s oil industry recovers.  Sanctions on Iran are having an effect; reports indicate it is in the deepest recession since the Iran-Iraq War.