[Posted: 9:30 AM EDT] We are seeing a bit of risk-off this morning on the big political stories from yesterday.  However, the emphasis is on “bit”; equity weakness isn’t excessive, the dollar is modestly weaker, gold is higher but not by a lot and Treasury yields are down but no panic has ensued.  So, let’s dig in:

The political news: As has been well documented, Paul Manafort[1] and Michael Cohen[2] were convicted yesterday.  The former was by a jury, while the latter plead guilty.  The basic charges were fraud.  We have received market-related questions about these events.  Here is our initial take: 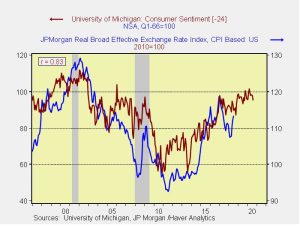 This chart shows the JP Morgan dollar index and the University of Michigan index of consumer sentiment.  Since 1997, the two series are highly correlated with a two-year lag.  Thus, if political turmoil begins to weigh on sentiment, it would probably put pressure on the dollar.  Our expectation—dollar bearish, which would be bullish for commodities, gold and foreign equities.

The political outlook: Yesterday’s news is damaging for the president but it hasn’t reached the level of critical quite yet.  The news highlights the importance of the midterm elections.  If the Democrats take the House, we would expect a drive to bring articles of impeachment against Trump.  As we saw with President Clinton in the late 1990s, that effort will likely fail in the Senate.  Even if the Democrats experience a major wave and take control of the Senate, it seems highly improbable that the threshold of 67 votes to remove the president would be met.

However, as we have noted above, the distraction level will be elevated.  That doesn’t mean that everything else would necessarily stop; President Nixon was able to come to the aid of Israel during the 1973 Yom Kippur War while in the midst of the Watergate investigation.  Nevertheless, it will be hard to maintain focus on other issues.  One subject we will be monitoring, especially if conditions deteriorate, is the power within the cabinet.  For example, if the Mnuchin/Kudlow wing of the administration gains power during the turmoil and overshadows the Lighthizer/Navarro wing, then the tenor of the trade conflict would likely moderate.  Our inclination is that Mnuchin will gain power and thus the trade conflict would be reduced.  Overall, as noted above, we look for increased political distraction; by itself, that won’t be enough to derail equities but it could put downward pressure on the dollar.

Trade: Progress on NAFTA continues as reports suggest that a “handshake deal” could be struck with Mexico by tomorrow.[6]  Talks on auto tariffs appear to be facing delays; as we noted earlier this month, the EU is expected to stall discussions into the midterms, likely hoping that more important issues will occupy the U.S. and thus allow the status quo to continue.[7]  Meanwhile, China and U.S. negotiators continue to talk but neither side appears optimistic about an agreement.[8]

Monetary policy: The Fed minutes will be released later today (see below).  We also note another report indicating that the BOJ is moving to end its aggressive easing stance.[9]