[Posted: 9:30 AM EDT] The president’s address: Last night, President Trump announced that he would expand the U.S. role in Afghanistan but did not give any specifics of the plan.  Additionally, the president stated that the U.S. will begin to pressure Pakistan to assist in the fight against terrorism as it is widely perceived that militant groups in Pakistan, most notably Haqqani, have been responsible for attacks in Afghanistan.  Trump’s apparent pivot in foreign policy allowed the GOP establishment to breathe a sigh of relief as he takes a more definitive leadership role abroad versus focusing on recent domestic issues.  News outlets have speculated for weeks that he would send 4,000 additional troops to the region, but the plan appeared to have stalled, most likely due to resistance from his former chief strategist, Steve Bannon.  Bannon’s exit from the cabinet seems to have paved the way for the decision as the military establishment faction of the president’s cabinet fills the ideological void that resulted from Bannon’s departure.  It is worth noting that Trump campaigned on a complete withdrawal from the war in Afghanistan; therefore, a reversal of this policy could lead to some backlash from his base.

Friend to foe: Breitbart News, an online publication headed by former chief strategist Steve Bannon, immediately condemned the president’s speech last night.  The news site labeled the president’s change in policy as a “flip-flop” and a “reversal of course.”  As noted in our previous report, we believe that Bannon was unable to disrupt the Washington establishment while working inside it and will now try to disrupt it from the outside.  A large faction of Trump supporters either read or are at least sympathetic to the views reported on Breitbart and, as a result, Bannon will likely use the publication to rally Trump supporters against the “globalist” factions within the president’s cabinet.  If the president continues to listen to the globalists in his cabinet, then we expect Breitbart to become increasingly more critical.

A parallel Italian currency?  Silvio Berlusconi, who is making something of a political comeback, raised the idea of creating a parallel currency in Italy.  The “new lire” could only be used within Italy (although, like bitcoin, if it became popular other nations could conceivably use it, too).  Clearly, euro-denominated bank debt would still need to be paid in euros but it might become popular if the Italian government is willing to accept the new lire for tax payments.  Of course, the other issue is in what currency would Italy denominate future government debt?  If it were denominated in the new lire, one would expect the yield to rise significantly.  Berlusconi has seen an improvement in his political standing and the euro is becoming less popular in Italy.  On the other hand, part of the reason nations in southern Europe adopted the euro was to enjoy the currency stability and low inflation that was common in northern Europe.  We suspect that the introduction of a parallel currency will end up with one of two outcomes: either it is successful and Italy leaves the Eurozone, or it fails and the Eurozone becomes even stronger.  If introduced, we suspect the odds favor the first outcome.

The election cycle: We have created an election cycle database for the S&P 500 beginning in 1928.  Taking the weekly data, we index the equity market to the first weekly close of the election year and show the behavior of the market over the subsequent four years.  This allows us to segregate the market by party in power, incumbent versus new party in power, etc.  The chart below shows how new GOP presidents fare. 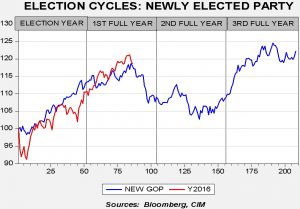 Equity markets tend to like new GOP administrations; so far, the Trump administration is following the average pattern fairly well.  We are reaching the point in time where disappointment usually sets in; we suspect that by August investors’ hopes for policy changes are confronted with the difficult reality of passing legislation.  Do we expect the large drop projected by the average for a new GOP administration?  Not necessarily.  A drop of this magnitude would almost certainly require a catalyst, such as a recession (not likely), a war (improbable, but not zero probability) or a political event (a debt ceiling crisis might do the trick).  In the absence of a catalyst, the most likely outcome is a sideways to weaker market.  In general, studies like this should be used for general direction, not forecasting.  This study could mean that we may have seen the equity market high for the year.  At the same time, there is still ample liquidity available (retail MMK funds are near $970 bn, well above the $900 bn that signals a lack of buying power).  Thus, we wouldn’t be surprised if we have seen the high for this year, but the more likely outcome is a modest correction and churning for the rest of the year.