[Posted: 9:30 AM EDT] The big story today is a bit of dollar weakness, which is putting some upward pressure on interest rates and helping precious metals.  Here is what we are watching today:

Trump talks: In a wide-ranging interview,[1] President Trump warned not to expect much from the Chinese trade talks[2] and stated that some trading partners, especially China and the EU, are manipulating their currencies, but the biggest news was another broadside against Chair Powell.  In a recent Asset Allocation Weekly,[3] we discussed the idea of Fed independence and examined the history of how presidents have managed their relations with the U.S. central bank.  Prior to the detente that was in place from 1993 until this year, presidents have refrained from commenting on monetary policy.  President Trump reiterated his desire for easy monetary policy and exhibited his displeasure with the current path of policy.  When the president criticizes the Fed, we tend to see higher long-duration Treasury yields and a weaker dollar.[4]

On the one hand, it’s hard to make the case that the FOMC is too tight.  After all, real fed funds are still below zero. 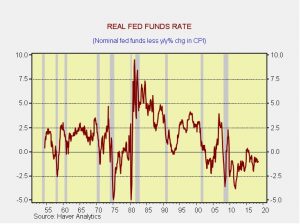 On the other hand, as we discuss in the current AAW below, the majority, but not all, of the Mankiw Rule variations argue for tighter policy.  However, the rate projection using core CPI and the employment/population ratio does suggest the Fed has achieved policy neutrality.  Although we are “not there yet,” policy is getting close to the point where mistakes have occurred in the past.  Leave rates too low and the risks of a lending and asset market bubble increase.  Tighten too much and a recession occurs.[5]  Powell’s speech at Jackson Hole on Friday will be closely watched for future guidance on policy.

We also note that Powell may be facing some internal dissent.  Atlanta FRB President Bostic[6] is calling for only one more hike this year and expressed concern about raising rates enough to invert the yield curve.  At current 10-year T-note yields, the Fed is clearly limited on how much further it can raise rates without inverting the curve.

In terms of trade, a trend does seem to be developing.  At first, the U.S. seemed to be threatening everyone with tariffs and trade sanctions.  However, the U.S. and EU appear to be trying to negotiate a deal.  As we noted last week, the U.S. and Mexico are close to an agreement.  The focus now appears to be China.  As noted earlier, the president downplayed any chance that upcoming talks with China will bring any breakthroughs.  Chinese officials appear to have concluded that the U.S. is using the trade issue as a way of slowing China’s rise.  China is taking steps to aid its economy,[7] which is slowing,[8] in part due to trade tensions.

Opening for cyberwar?  According to the Washington Post, President Trump is giving the military more discretion in using cyberwar tools against adversaries.[9]  This will give the military the ability to respond to foreign cyberattacks that have become increasingly frequent.  They may be busy soon.  The New York Times is reporting that Russian hacking groups targeted GOP think tanks.[10]

More on the BOJ: Reuters is reporting that the BOJ is becoming less concerned with falling equity prices and may be engaging in “stealth tapering.”[11]  According to reports, the bank has become more tolerant of equity price weakness, suggesting new flexibility at a minimum.   Governor Kuroda has been facing increasing criticism for ultra-accommodative monetary policy from the financial services industry, which is struggling with profitability in a low interest rate, flat yield curve environment.

Some inflation oddities: Our position is that price stability rests on three legs.  The first is globalization.  If firms and consumers have most of the world at their disposal to source goods and services, the breadth of competition should keep prices under control.  The second leg is deregulation, which we define as the ability to introduce new techniques and technologies unfettered by regulation.  So, if a firm decides to create an app that will allow you to rent out the room over your garage without interference or zoning changes, it will expand the supply of motel-style properties and lower prices.  The third leg is central bank independence.  Although difficult to strictly define, if investors and consumers believe the central bank will be able to implement monetary policy without interference, it should foster price stability.

Currently, we view the second leg as alive and well but the first and third are coming under fire.  Not only are trade barriers going up across the world, but the president has reportedly expressed discontent with the path of monetary policy.[12]  Inflation has been creeping higher but is still not at levels that cause us great concern.  However, a couple of anecdotes caught our attention.  First, there are reports that firms are starting to push price increases as their costs rise.[13]  Second, fears of trade impediments on autos are reportedly leading to pre-emptive increases at used car auctions.[14]  These actions, by themselves, are not worrisome.  But, if they begin to expand, it could signal a growing inflation problem that the financial markets are not prepared for.

Swedish elections: Sweden holds elections on September 9; a spate of violence has struck the country recently and migrants are being blamed for the attacks.[15]  Recent polls show the Sweden Democrats, a nationalist, anti-immigrant party, have been fading but they were the strongest polling party in Sweden in mid-June.  At present, the Social Democrats, a center-left party, are leading in the polls at 25.2%.  The Sweden Democrats are polling at 18.7%.  The concern is that if the Sweden Democrats pull 20% of the electorate it may be difficult for the center-left or center-right to form a government.  Thus, even Sweden is facing rising discontent from populist parties. 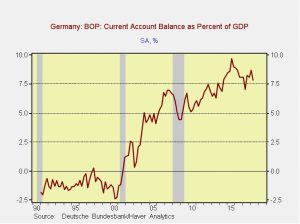 This surplus began with the onset of the Eurozone and was aided by reforms that curtailed wage growth.  Germany uses the Eurozone in the same way 19th century imperialists used colonies, a place to force the absorption of excess productive capacity.  We note that President Trump suggested in the aforementioned interview that he believes China and the Eurozone are manipulating their currencies.  The German current account data does bolster than argument.

As Greece ends, Italy begins?  Although we haven’t said much about it, the media is making a big deal out of the fact that Greece is exiting its bailout.  Early career experiences suggest to us that Greece will eventually return to trouble, but probably not until the end of the 2020s.  However, with attention leaving Greece, the financial markets are beginning to notice the persistent problems in Italy.[17]  Italian political leaders say they will fend off these attacks,[18] but the potential for trouble is elevated when a government issues debt in a currency it doesn’t control.

Turkey news: Turkey has ended the travel ban on a German journalist who was being detained on terrorism charges.[19]  We view this as an attempt to gain favor from Germany, who could help Turkey in its current plight.  However, recent comments from EU officials suggest that EU or German help isn’t likely.[20]

And, finally: Be careful with those rented scooters…just sayin’.[21]