Markets are mostly quiet this morning, more typical of late August.  Here is what we are watching:

G-7 Summit: Japanese government sources say the Group of Seven (G-7) summit this weekend in France will probably not adopt a joint communiqué because of the deep disagreements between the various countries regarding free trade and climate change.

Italian no-confidence vote: Italy’s legislature will vote today as to whether it will continue with its current government or force new elections.  Although we think the odds that the government falls are not that high (members seem cool to the idea), anytime a vote is held unexpected outcomes can emerge.  If Deputy PM Salvini had his way, he would bring down the government and become the new prime minister.  While this outcome is likely at some point in the future, it probably won’t happen today.  A Salvini-led government would be a problem for the EU; he has been pressing to violate EU fiscal rules and would likely foster a governance crisis for the union.

Brexit letters: PM Johnson is trying to prod the EU into reopening negotiations; he sent a note to Donald Tusk, the president of the European Council,[1] indicating that the Irish backstop should be removed and in its place, well…that part’s not clear.  Mr. Tusk rejected the proposal.  The Irish backstop is a real problem for Brexit; the EU won’t allow a free trade border to exist with a nation that isn’t in the EU, which is what Johnson seems to want.  That’s why Theresa May accepted the backstop which effectively keeps Britain in the trading union without the ability to influence it.  Essentially, if Britain wants to leave, a hard border on the Northern Ireland/Ireland frontier will return.  Additionally, that will seriously complicate Britain’s ability to negotiate a free trade deal with the U.S.  It looks to us like the odds of a hard Brexit are rising.  A looming constitutional crisis could emerge as Johnson tries to overcome opposition in Parliament to a hard Brexit.  In addition, dissention in Parliament could trigger new elections.

United Kingdom-China: The British consulate in Hong Kong has announced that one of its employees has been detained in mainland China since making a business trip there in early August.  The detention could be Chinese retaliation for a telephone call that British Foreign Secretary Raab made to Hong Kong Chief Executive Carrie Lam earlier this month.  In the call, Raab lobbied for an investigation into the issues surrounding the anti-Chinese political protests that have been plaguing Hong Kong, which Beijing sees as its own internal affair.

Social media firms accused China of spreading disinformation about Hong Kong protestors, and the firms have removed accounts with suspected ties to Beijing that have been involved in disseminating such disinformation.  These firms will likely face retaliation from Beijing.

More stimulus: The year before the election year tends to be a good year for equities. 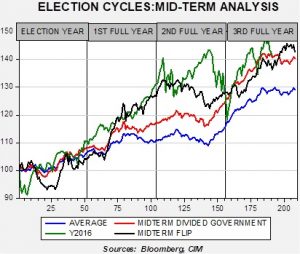 To create the data for this chart, we index the Friday close for the S&P 500 going back to the first week of January 1928 for a four-year period.  We repeat the process for every four-year period to the present; this gives us a consistent presidential cycle.  Note that in the second year, after the November midterms, equities tend to rally strongly until around mid-year of the last year before the election.  Part of that rally is the removal of uncertainty surrounding the midterm elections, but often presidents act to stimulate the economy to either improve the odds of reelection or support the party in power.  This year generally fits that pattern.

And, right on cue, the White House is pressing for economic support.  First, the president has subjected the Federal Reserve to strong criticism, pressing for aggressive rate cuts.  Second, the White House is apparently considering a payroll tax cut.  A payroll tax cut would be a significant move for the economy.  It would affect almost all workers and, unlike the earlier tax cuts, the benefit would mostly go to the bottom 80% of households in terms of income share.  We have seen such reductions in the past; the Obama administration cut the rate by 200 bps in 2011 and 2012, but the rate returned to its earlier level after the two-year break.  The administration has denied the report, but we doubt that a measure such as this isn’t at least being considered.

Syria-Russia-Turkey: Syrian forces and their Russian allies have bombed a Turkish military convoy making its way toward an observation post set up to help diffuse tensions in northwestern Syria.  Ankara claims the convoy was merely trying to resupply the post, but the Syrians and Russians say it was bringing supplies to anti-government rebels in the area.

Russia-Ukraine: French President Macron and Russian President Putin agreed at a summit yesterday that there may be a new chance to resolve the military conflict in eastern Ukraine, based on the election of the new Ukrainian president, Volodymyr Zelensky.  Earlier this month, Zelensky called for fresh peace talks between his government and Russian-backed separatists in the region.

Russia: Two more radiation-monitoring stations in Russia have gone dark, adding to evidence that the government is trying to hide what happened in the apparent test failure of a new nuclear-powered cruise missile last week.  A total of four monitoring stations connected with the Comprehensive Nuclear Test Ban Treaty have now gone silent.

Iran: State-run media are casting the release of the Iranian oil tanker seized in Gibraltar last month as a sign that Iran can stand up to the economic sanctions imposed on it by the United States.  Iranian politicians reportedly believe the tanker was released only because the country’s Revolutionary Guards retaliated by seizing a British tanker.  That could encourage further such actions by Iran, which will keep tensions high in the Persian Gulf and maintain some measure of a risk bid for oil.  Meanwhile, as the released tanker steams toward Greece, the U.S. government has issued a warning that any entity that provides support to the ship or her crew would be subject to U.S. “immigration and potential criminal consequences.”

Mexico: In another worrying sign for the viability of contracts under leftist President Andrés Manuel López Obrador, the Mexican government has demanded $900 million from the builders of a major natural gas pipeline that is supposed to deliver natural gas from Texas to Mexico.  The government is demanding the money as compensation for construction delays, and it has already forced the builders to enter into arbitration.  Separately, the government is trying to reduce the capacity and usage charges it faces under the contract for the project.

Colombia: Agricultural officials in Bogotá have confirmed that a soil fungus that has devastated banana plantations throughout Southeast Asia has been detected in Colombia, the top global exporter of the fruit.  While the fungus isn’t dangerous to humans, it prevents trees from producing and is considered so dangerous that it could eventually eliminate all Cavendish bananas, which make up 95% of world exports.

Odds and ends: Yesterday, we reported that the Business Roundtable moved to change the focus of business from promoting shareholder value to a broader goal of stakeholder value.  Shareholders have responded unfavorably.  The Reserve Bank of Australia discussed unconventional policy at its August meeting.  Japan allowed more exports of high-tech materials to South Korea, easing recent tensions.  Another reason for the recent U.S. attraction to Greenland—rare earths.  And, ISIS isn’t completely eliminated yet.