[Posted: 9:30 AM EDT] It’s a risk-off morning.  The news driving the weakness in equities appears to be related to escalating trade tensions with China.  Here is what we are watching this morning:

Trade update: Yesterday, there were reports that the White House was considering increasing the tariff rate on $200 bn of Chinese goods from 10% to 25%.  Social media confirmed these reports later in the day.[1]  China has indicated it will retaliate in kind.  Although talks are continuing, there isn’t much evidence to suggest that progress is being made.  The CNY dipped on the news.[2]

The key unknown with the administration’s trade policy is whether the tariff threats are simply a negotiating tactic or if the president really wants to move toward outright protectionism and autarky.  There is evidence for both positions.  For the former, the apparent progress with the EU and Mexico would suggest that the White House wants to adjust trade regimes but not end imports.  The positions taken with China suggest the latter.  The lack of clarity represents policy uncertainty.  President Trump seems to hold that one of his greatest strengths is his ability to negotiate and his style is one of free-wheeling, which means he avoids situations that restrain his ability to maneuver.  If true, it would mean that none of his statements are expressions of deeply held positions but are, instead, tools to engineer deals.  Thus, extreme statements and escalating tensions are part of his negotiating pattern, meaning if the other party refuses to budge the outcome will be an impasse or worse.

The financial markets are expecting someone to blink.  So far, Mexico and the EU appear to be conceding, although with the latter we may simply be seeing a stall to see how the mid-term elections go.  China, on the other hand, probably can’t concede without triggering a political crisis.

China will be holding its annual CPC meetings sometime in the next two weeks.  These meetings are rather informal and secretive.  We expect trade to be a dominant issue at these meetings.  We have been hearing rumblings that Chairman Xi is facing internal criticism.  A recent vaccine scandal hasn’t helped.[3]  Xi is also being seen as not handling Trump effectively.[4]  All this leads us to believe that Xi cannot back down on trade without losing face; thus, escalation is probably a higher likelihood than the market currently expects.  Furthermore, the potential for greater volatility remains elevated.

BOE: The BOE voted 9-0 to raise rates; although the outcome isn’t a shock, the unanimous vote was more hawkish than expected.  The consensus was 8-1, and some calling for 7-2, with the dissents wanting to keep rates steady.  However, in the press conference, Governor Carney’s guidance was for a very gradual rate increase, with Brexit perhaps leading to an even slower tightening.  The financial markets took the guidance as dovish; the GBP sold off and Gilts rallied.  We see none of this as necessarily surprising and believe the market reaction was more of a sale after the event.

The Fed: The Fed also followed the expected script.  There were no changes in rates but the statement was upbeat, leaving little doubt that the current path of tightening will continue.  We have been seeing an uptick in implied LIBOR rates—the market is nearing a level (though it hasn’t quite reached it yet) that would imply a terminal rate of 3.25% for fed funds, which would mean three hikes, instead of two hikes, next year. 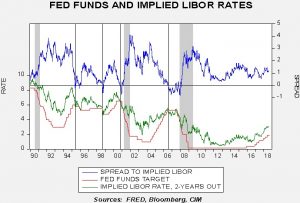 The green line is the implied three-month LIBOR rate from the two-year deferred Eurodollar futures.  In other words, this is the market estimate of where the LIBOR rate will be in August 2020.  History shows that the Fed tends to tighten until it reaches this rate and doesn’t usually raise rates much past that level.  Thus, investors should expect the Fed to stop raising rates once the target hits 3%, although the chances of a hike above that level are rising.

This chart shows current crude oil inventories, both over the long term and the last decade.  We have added the estimated level of lease stocks to maintain the consistency of the data.  As the chart shows, inventories remain historically high but have declined significantly since March 2017.  We would consider the overhang closed if stocks fall under 400 mb.  This week’s unexpected increase occurred because of a sharp decline in oil exports which offset a recovery in refinery operations.  It is unclear if the drop in exports was a fluke or structural.  We are leaning toward the former.

Based on inventories alone, oil prices are near the fair value price of $71.32.  Meanwhile, the EUR/WTI model generates a fair value of $60.97.  Together (which is a more sound methodology), fair value is $64.16, meaning that current prices are above fair value.  Currently, the oil market is dealing with divergent fundamental factors.  Falling oil inventories are fundamentally bullish but the stronger dollar is a bearish factor.  It should be noted that a 406 mb number by September would put the oil inventory/WTI model in the range of low $80s per barrel.  Although dollar strength could dampen that price action, oil prices should remain elevated.