Happy Monday!  Equity futures are pushing higher again this morning after the U.S. gives Huawei (002502, CNY 2.95) a 90-day extension.  It’s a big week—Fed minutes, the Jackson Hole meeting and the G-7 next weekend.  Treasury yields are higher and gold is retreating.  Here is what we are watching:

The Fed: We will get the Fed minutes at mid-week.  Although these reports are heavily sanitized (comparing the minutes to the transcripts that come out in five years is an interesting exercise), given the degree of dissent at the last meeting the minutes might offer some insight into how fast Powell can push the committee to further easing.  The other big event is the annual central bankers meeting in Jackson Hole, WY, sponsored by the KC FRB.  Chair Powell will speak on Friday under heavy pressure from the White House and financial markets.  To some extent, Powell probably needs a new narrative to use for more aggressive easing.  In the past, Fed chairs have deployed new frameworks to make major adjustments to policy.  For example, Volcker shifted from rate setting to money supply targeting in order to aggressively raise rates without it looking like the Fed was merely implementing austerity (it was).  Greenspan argued that rising productivity allowed policymakers to avoid the straitjacket of the Phillips Curve in the late 1990s, keeping policy rates lower than they otherwise would be.  Sadly, Powell may not have the intellectual “chops” to create a new regime; perhaps Jim Bullard (St. Louis FRB) could offer him one.  If Powell wants to use the current paradigm to cut rates, he will likely face continued resistance from traditional hawks and Phillips Curve adherents.

U.S.-China Trade: President Trump tweeted over the weekend that trade talks with China are going well, and that U.S. and Chinese negotiators might soon meet in Washington again.  Chief Economic Advisor Larry Kudlow said the negotiators would have at least one more telephone call in the next week or two to lay the groundwork for the next round of face-to-face meetings. This suggests those meetings wouldn’t happen until at least September.  Separately, Trump provided a positive readout on his Friday dinner with Tim Cook, the CEO of Apple (AAPL, 206.50).  According to Trump, Cook made a compelling argument that the new U.S. tariffs against China are disproportionately affecting Apple, while giving an advantage to South Korea’s Samsung Electronics (005930.KS, 43,600).  Since that probably raises the chance of some tariff relief for the company, Apple is rallying so far today and helping to pull the rest of the market along with it.  On the other hand, we note that although over the weekend Kudlow announced a three-month extension of licenses for U.S. firms to sell to Chinese telecom firm Huawei (002502.SZ, 2.95), the president last night said U.S. companies ultimately shouldn’t be doing business at all with the Chinese firm.

Although the president’s postponement of tariffs has led to a lift in equities, it should be noted that not all tariffs were delayed and the ones that will be implemented early next month matter.  We also note that the president is making reference to Hong Kong in comments, signaling to China that a harsh crackdown will adversely affect trade talks.

We also want to mention an editorial by Robert Samuelson, quoting one of our favorite books[1] and authors, Charles Kindleberger.  In this book, Kindleberger introduced the idea of “hegemonic stability theory” and argued that the Great Depression was caused by a global power vacuum; essentially, the U.S. was unwilling to accept the superpower role and the U.K. was unable to maintain it.  This situation led to a collapse in global trade and supported the rise of fascism.  Samuelson correctly notes that we are seeing somewhat similar conditions today.

PBOC: The PBOC unveiled a new policy rate, called the “loan prime rate,” which will replace the benchmark lending rate.  The rate is derived from quotes on prime loans from 10 major banks and has been published since 2013, but it is basically unused in setting policy.  After tomorrow, commercial banks will be required to price loans off the loan prime rate.  Since the loan prime rate does trade a bit below the benchmark lending rate, at least for now, this move is something of a modest easing.

Recession talk: This weekend, talk shows were dotted with administration officials downplaying the odds of recession.  Despite the attempt to lift spirits, worries about recession are mounting.  The chart below shows relative interest in the word “recession” in searches.  It has reached its highest point in a year and in the past five years (not shown). 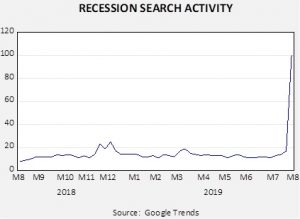 The yield curve has prompted this surge in interest.  Additionally, as worries mount, analysts are looking at other variables that might either confirm the recession signal from the financial markets or offer some insight into timing.  As a general rule, the earliest warning signs tend to have the highest false positives, or the most variability in terms of timing.  One industry that has a generally good track record in signaling downturns is the recreational vehicle industry.  RVs are purely discretionary products; thus, their sales tend to signal how optimistic consumers are in the business cycle.  Here at Confluence, we have a long history in analyzing this part of the economy.  Recent evidence from this industry is clearly worrisome, suggesting a downturn is likely.

Hong Kong: Hundreds of thousands of protestors demonstrated against China’s growing influence in Hong Kong yet again over the weekend, with police water cannons on standby, but reports indicate the organizers were successful in keeping the protests peaceful.  That suggests the protestors are able to adjust their behavior in order to maintain or even build further support among Hong Kong’s population.  This could help stave off any crackdown by Beijing – a move that would probably be negative for the financial markets – but it also risks sapping the momentum from the protests and allowing Beijing to wait it out.

There are reports that capital flight issues are starting to emerge from Hong Kong.  In the short run, this may undermine the Hong Kong dollar’s peg to the U.S. dollar.  However, in the long run, it creates the issue discussed by Albert Hirschman[2] as to whether one exits under deteriorating conditions or agitates for change.  This issue will become increasingly important with Hong Kong as those who can may simply leave, increasing the odds that Beijing will be able to bring the territory under a single government.

United Kingdom: A leak of Prime Minister Boris Johnson’s contingency plan for a no-deal Brexit – dubbed Operation Yellowhammer – shows that the government thinks “EU Exit fatigue” has discouraged many companies from properly planning for an abrupt, chaotic exit from the European Union on October 31.  The plan envisions three months of chaos at British ports, shortages of food and fuel, nation-wide political unrest and the imposition of a hard border between Northern Ireland and the Republic of Ireland.  Separately, the outgoing president of the European Commission, Jean-Claude Junker, will miss the G-7 meeting on Friday due to an emergency gallbladder operation over the weekend.  That will deprive Johnson of one of his last opportunities to pressure the EU for a new withdrawal deal to replace the deal negotiated by the former prime minister, Theresa May.

Russia: Although former Soviet dissidents aren’t being allowed to mark the event, today is the 28th anniversary of the attempted coup against Soviet President Mikhail Gorbachev, which led to the breakup of the USSR, the demise of Soviet communism and the eventual rebirth of Russia as a kleptocratic, corporatist state under President Putin.  Last week’s apparent explosion of an experimental nuclear-powered cruise missile illustrates the extent to which Russia is also trying to rebuild its military strength and reestablish its military technology effort.  New reports say two nearby radiation monitoring stations connected with the Comprehensive Nuclear Test Ban Treaty have gone silent since the missile mishap, illustrating how Russia is also trying to cloak its new military buildup, just as the Soviet Union would have done.  Old habits die hard.

Greece: Finance Minister Christos Staikouras said in an interview that Greece’s new center-right government will implement a comprehensive tax reform plan that would cut corporate and personal income taxes, reduce the value-added tax, streamline tax incentives and eliminate the emergency levies imposed during the Greek debt crisis over the last decade.  Staikouras vowed that the plan would be implemented without violating Greece’s bailout promise to maintain a primary budget surplus of 3.5% of GDP.

Saudi Arabia: Iran-backed Houthi rebels in Yemen attacked a Saudi oil and gas facility with 10 drones over the weekend, but Saudi officials said the attack only resulted in a fire that has already been controlled.

United States: In the midst of last week’s market turmoil, President Trump held a previously undisclosed conference call with the chief executives of three of the largest U.S. banks.  It’s not clear who initiated the call or what exactly was discussed, but it wouldn’t be a surprise if the bankers gave Trump an assessment of the current economic situation and the risks arising from the administration’s trade policies.

Times they are a-changing: The U.S. Business Roundtable has issued a statement suggesting that the sole focus on shareholder value is no longer viable.  This notion, which was famously supported by Milton Friedman, is an element of the equality/efficiency cycle.  When one is in an efficiency cycle, the focus on shareholder value alone is usually championed.  However, when equality becomes more important, other factors emerge.  We examined this issue in a recent WGR series (here and here).  Such concerns will almost certainly lead to lower margins as CEOs begin to balance the needs for profits along with consumer concerns and improving the lot of its employees.

Odds and ends: If you buy a house in Denmark, the bank will pay you for your trouble in an era of negative interest rates.  Germany is considering a modest fiscal expansion but only if conditions worsen.