[Posted: 9:30 AM EDT] The FOMC minutes offered a short period of market volatility; the initial reaction was hawkish but that faded rather quickly.  After reading the full report, it appears that the majority of members believe that:

Overall, despite recent comments that September is “live,” the fact is that the risks of raising rates are thought to be greater than the risks of keeping policy accommodative.  Thus, the minutes suggest policy will remain steady for the foreseeable future.  Neil Irwin of the NYT suggests in an article today that the FOMC lacks the framework for monetary policy.  We also suspect that is the case.  Recently, St. Louis FRB President Bullard suggested the Fed should base policy on “regimes,” which seem to be medium-term conditions, and adjust when regimes change.  San Francisco FRB President Williams appears to be focusing on the steady drop in the term premium and is calling for a higher inflation target.  As we have noted before, by any measure of the Phillips Curve, the Fed should be raising rates aggressively.  The fact that it is not moving rates suggests the Fed really doesn’t have an idea what is presently driving policy.

U.S. crude oil inventories fell 2.5 mb compared to market expectations for a 0.3 mb build.  This chart shows current crude oil inventories, both over the long term and the last decade.  The usual seasonal inventory draws, which are more evident in the chart below, are starting to slow.  So, inventories remain elevated.  Inventory levels have been running below seasonal norms, although the divergence has been narrowing.  It narrowed significantly this week.  We are in a period of the year when crude oil stockpiles tend to fall at a slowing pace; in fact, this month, declines slowed markedly.  Oil prices rose due to a surprise 3.3 mb draw in gasoline stocks.  Although this was clearly bullish for gasoline, the “clock” is running on this product because the summer driving season is rapidly coming to a close.  Still, for an oversold market, it was the catalyst for an impressive rally.

In early July, inventories rose contra-seasonally; this week’s decline puts us back on the normal seasonal path.  This situation is concerning and does suggest we will end this draw season with crude stocks in excess of 500 mb. 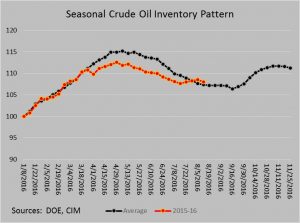 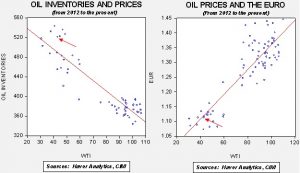 Based on inventories alone, oil prices are profoundly overvalued with the fair value price of $36.52.  Meanwhile, the EUR/WTI model generates a fair value of $48.21.  Together (which is a more sound methodology), fair value is $42.16, meaning that current prices are a bit rich.  Given that we don’t expect significant declines in inventory over the coming weeks, the key to oil prices continues to rest with the dollar.

Although OPEC jawboning is probably to blame for the recent rally, we would be surprised to see any significant action to lift prices much beyond the recent rally.  Reuters reports this morning that it is planning to expand production again this month to a new record level.  If so, the kingdom’s output would exceed Russia’s, making Saudi Arabia the world’s largest producer.  The Saudis appear to be lifting production in front of a proposed output freeze, which would tend to undermine the effectiveness of a freeze to reduce the level of supply overhang in crude oil.