[Posted: 9:30 AM EDT] There is something of a negative tone to risk assets this morning but nothing that, so far, appears significant.  Here is what we are watching today:

ECB minutes: The main takeaway from the ECB minutes is that the recent rise in the EUR has caught the attention of policymakers.  The EUR is just off a 30-month high in part due to expectations of a slow reversal of the ECB’s ultra-accommodative monetary policy.  Supporting EUR strength has been the realization that the FOMC (see next item) will be slow to raise rates.  And, on a purchasing power parity basis, the dollar remains overvalued (EUR fair value is around $1.30 based on these models)[1] and thus is vulnerable to weakness.  The ECB, unlike the Fed, has the exchange rate as part of its mandate and thus takes it into account when setting policy.  The EUR’s strength may slow the pace of stimulus withdrawal but we don’t expect it to stop it completely because Germany really wants to see tighter policy.  Eventually, the Merkel government will get its way.  The EUR is weaker this morning on the concerns expressed in the minutes.  However, we don’t expect that the ECB can engineer a reversal in recent currency trends, mostly because the European currency is still undervalued and U.S. monetary policy isn’t going to tighten all that much.

Fed minutes: Yesterday, the FOMC released the minutes of its July 25-26 meeting.  The minutes are heavily summarized (and sanitized); after five years, the Fed releases transcripts of these meetings which are quite enlightening, revealing disagreements and snarky comments.  In 2022, this meeting will probably have similar interesting commentary when the transcripts are released.  The committee is clearly divided; some members are worried that inflation could rise as capacity becomes constrained, and it appears that nearly an equal number worry that not only will inflation remain low but it might fall further.  Although the majority still adhere to the Phillips Curve framework, a significant minority are concluding that it is no longer useful in forecasting inflation.  The committee warned against deregulating too quickly or creating conditions that led to the Great Financial Crisis.  It does appear that the balance sheet reduction process could begin in September.  The markets took the minutes as dovish and we concur with that judgement.

Watching Washington: Early on, we argued that President Trump had to manage two constituencies, the establishment wing and the populist wing of the GOP.  The former want tax cuts, deregulation and continued globalization.  The latter want immigration restrictions, trade impediments, health care reform and infrastructure spending.  There are rather obvious policy conflicts between the two groups.  The establishment, heavily represented by business leaders, do not want trade restrictions and favor open immigration.  They are cool to infrastructure spending, although they are willing to bargain on that issue.  Regarding health care, big business has generally worked within the Obamacare framework and has learned to live with it; thus, repeal isn’t a high agenda item.  On the other hand, the populists, representing the working class and small business, are tired of globalization, have faced rising costs due to the Affordable Care Act and really don’t benefit directly from tax cuts.  Appeasing each group is difficult as there are few overlapping policies.  Managing this situation would be difficult for an accomplished political operator.  It is a really hard task for a neophyte.  Much of the president’s struggles are tied to managing this divide.

There are numerous cross-currents coming out of Washington over the past 48 hours.  Steve Bannon dropped a bombshell with his interview with Robert Kuttner of the American Prospect.[2]  Bannon indicated that there is no military solution to North Korea, essentially saying the president’s comments were bluster.  He showed his contempt for the establishment members of the administration (Cohn, Mnuchin) and also suggested the U.S. is at economic war with China.  Interestingly, he showed nothing but contempt for the white nationalists in Charlottesville.  To quote, “Ethno-nationalism—it’s losers. It’s a fringe element. I think the media plays it up too much, and we gotta help crush it, you know, uh, help crush it more.  These guys are a collection of clowns.”  Bannon is making an important distinction here between the working class and the white separatist, white power movement, suggesting that restricting trade and immigration (and probably reregulating the economy) are worthy causes.  Fighting over Civil War monuments isn’t a significant part of that policy goal; in fact, other than poking the mainstream media, this issue probably isn’t all that critical.  This may or may not be the president’s position on this issue.

Bannon has attempted to walk back these comments by saying he didn’t think it was an interview.  This is disingenuous.  Bannon ran Breitbart.  He should be acutely aware that unless clearly stated, journalists assume a discussion is on the record.  We do media interviews all the time; there have been occasions where, for a variety of reasons, all or part of an interview is “off the record.”  To signal this, we would tell the reporter up front that comments are not on the record and are only for background information.  We suspect Bannon knew what he was doing.

So, the exodus of CEOs from the various advisory boards appears to be a win for Bannon.  Attacking China on trade is a clear focus for him.  Here is what the markets should be watching.  If the establishment has failed to capture the president and he goes over to the populists, it probably won’t be good for financial markets.  Tax cuts and further deregulation may not occur.  Trade restrictions and immigration cuts are likely.  These actions will crimp margins.  The key to whether or not this trend develops rests on personnel; if establishment figures resign (Cohn, Mnuchin, et al.), the populists may gain access to the levels of power.

This chart shows current crude oil inventories, both over the long term and the last decade.  We have added the estimated level of lease stocks to maintain the consistency of the data.  As the chart shows, inventories remain historically high but they are declining.  In fact, we have reached last year’s seasonal low, made in September; if seasonal patterns hold, we should see inventories fall to levels not seen since 2015.  Again, this week, there was no oil sold out of the Strategic Petroleum Reserve (SPR).  The authorized sale is nearly complete as 16.2 mb have been released out of an authorized 17.0 mb.

As the seasonal chart below shows, inventories are usually well into the seasonal withdrawal period.  Even with the SPR sales, we have already seen a larger than normal seasonal decline; in fact, the drop is rather remarkable.  It should be noted that the seasonal trough isn’t usually hit until mid-September.  Thus, we should see further stock withdrawals over the next four weeks.

Based on inventories alone, oil prices are overvalued with the fair value price of $52.22.  Meanwhile, the EUR/WTI model generates a fair value of $64.13.  Together (which is a more sound methodology), fair value is $60.26, meaning that current prices are well below fair value.  The most bullish factor for oil is currently dollar weakness, although the rapid decline in inventory levels is also supportive.  Prices are well above fair value.

So, why are oil prices struggling?  The mostly likely answer is that traders are focused on rising U.S. output.  The chart below shows weekly U.S. oil production.  It is near previous peaks.  When seasonal demand falls, which will begin over the next month, inventories could rise rapidly if production continues to increase. 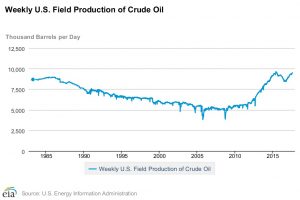 However, one factor traders might be missing is that U.S. oil exports are rising as well. 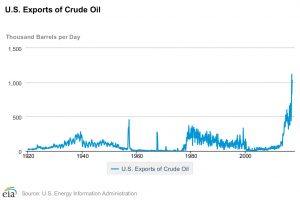 There are reports that the Louisiana Offshore Oil Port (LOOP) is considering retrofitting its facility to also export oil.  Currently, it can only handle imports.  Rising exports can allow for rising production and falling U.S. crude stockpiles…but it is also bearish for global prices.