[Posted: 9:30 AM EDT] It was another quiet night for news, typical of summer.  The most interesting information came from NY FRB President Dudley and Atlanta FRB President Lockhart, who both suggested that the September Fed meeting (9/20-21) is “live” and the markets are underestimating the odds of a rate hike.  So far, the markets are unimpressed.  The dollar is a bit higher this morning but has been weak lately; if a rate hike were imminent, we would be seeing the dollar doing much better.

One factor that could be spurring this rate move talk is evidence of improving economic conditions.  The Atlanta FRB GDPNow tracker is showing that Q3 could be very strong. 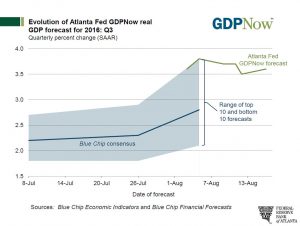 The current “nowcast” from the Atlanta FRB is 3.6% GDP, at the upper end of the Blue Chip consensus. 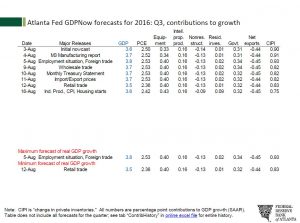 As we saw in Q2, consumption remains robust; based on the available data, it is adding 242 bps to the 3.6% rise in GDP.  Also note that inventory rebuilding, which cut GDP last quarter by 116 bps, is lifting GDP by 75 bps this quarter.  Government, which reduced Q2 GDP by 16 bps in Q2, is expected to add 32 bps to Q3 growth.  Also, a lift in equipment investment, which reduced GDP by 21 bps in Q2, is expected to lift growth by 43 bps in Q3.  Net exports are the largest drag on growth, cutting GDP by 45 bps so far.

If GDP comes in this strong, the argument for raising rates will be on solid ground.  On the other hand, raising rates into an election year, though not unprecedented, would be institutionally difficult in this election cycle where populist sentiment is strong.  If the Fed is going to move rates higher before the election, September may be the only live meeting; the next opportunity may not present itself until December.  This morning, fed funds futures have the odds of a rate hike exceeding 50% at the February 1, 2017 meeting.

Oil prices have rallied strongly over the past few days on comments from Saudi Arabia and others suggesting an output freeze may be coming.  We view this as mostly jawboning the market.  Saudi Arabian production is elevated and so freezing output at current levels would be acceptable to the kingdom.  However, we doubt it would participate in a freeze and allow Iran to capture market share.  Nevertheless, the oral intervention does indicate that Saudi Arabia is probably trying to establish a trading range with $40 (basis WTI) at the low.  The problem is that the overhang of crude supplies remains high and we are heading into a weak seasonal period for oil as the end of the vacation season comes on Labor Day.  The vigorous nature of the bounce has all the characteristics of short covering; if that buying is exhausted and the traders return their focus to inventory levels and the end of summer driving demand, a retest of the $40 level would not be a surprise.  We will have more on oil tomorrow when we recap the inventory data.