Happy Friday!  Equity futures are higher this morning on hopes that the president is further retreating on tariffs.  Treasury yields are higher and gold is retreating.  Central banks around the world are moving to ease.  Here is what we are watching:

Backing away?  There are signs that President Trump may be looking for an off-ramp for his recent tariff threats.  The presidents of China and the U.S. are reportedly in contact and some movement on fentanyl is possible which, if met, would give the U.S. a reason for pulling back or delaying the tariff threat.  There are reports that the president is getting concerned about the economy.  Although the general response from the administration on economic fears are centered around overly tight monetary policy, history shows that incumbent presidents who face recessions for whatever reason tend to be blamed for the downturn.  Thus, even if it is true that monetary policy is too tight, voters don’t care; the president in office suffers the loss.

Although yesterday’s retail sales data suggests that consumption remains strong, it is clear the trade conflict is weighing on other parts of the economy.  A long list of nations, mostly export-dependent, are seeing serious economic pressure.  The fear is that these nations may drag the U.S. into a downturn as well.  Backing away from the trade conflict would remove a worry from the economy and would clearly lift market sentiment.

Monetary policy: Although yesterday’s retail sales data was impressive, it probably won’t cause the FOMC to hold steady on policy next month.  We note that Fed officials are signaling cuts, although there is no evidence that aggressive action is being considered.  It should also be noted that the Fed isn’t alone in easing; more than 30 other central banks are also cutting rates.  More importantly, the ECB appears ready to not just cut rates but to become more aggressive in QE.

Fiscal policy: There are reports that both China and Germany are considering fiscal stimulus.  The former has already conducted some actions, while the latter is usually reluctant to spend.  This action would be important; the saving identity shows why:

Persistent trade surplus nations usually have excess private saving over investment.  If they run a balanced fiscal account, to balance this identity, exports>imports by the exact level of the excess private saving.  So, a trade deficit has nothing to do with how much your consumers prefer foreign goods and everything to do with macroeconomic policy.  If China and Germany (especially Germany) were to lift fiscal spending, their trade accounts would be closer to balanced as the government deficit would be used to absorb the excess saving rather than the trade account. 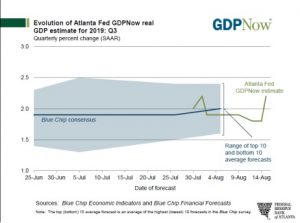 The contribution data suggests the economy is mostly being supported by the consumer. 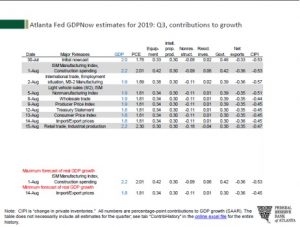 Outside the consumer, the rest of the components of GDP are a wash.  Of course, strong consumption will tend to boost imports, so some offset is expected from net exports in the wake of rising consumer activity.  However, some of that consumption is also resulting in inventory reductions, which are also a drag on growth.  An interesting side note comes from reports that auto dealers are holding excess inventory, which may mean they will be forced to aggressively price product to rebalance their market.

China and Hong Kong: Widespread protests are expected for the 11th consecutive weekend.   We reported yesterday that Chinese security officials are making a clear show of force in what is likely a bid to intimidate the protest movement.  So far, it isn’t working.  If China were to use the military against the protestors, we don’t see how the U.S. would not react with some sort of economic sanctions at a minimum.

The chief executive of a major Hong Kong airline has submitted his resignation “to take responsibility” for airline staff who have supported or participated in the city’s anti-Chinese political protests.  The resignation of Rupert Hogg, CEO of Cathay Pacific Airways (CPCAY, 6.68), shows how Beijing is trying to rein in private businesses for its own political purposes.  As such, the incident is another negative dimension to the ongoing protests.  The disruptive protests have helped drive down Hong Kong stocks over the last month, but reporting today says the declines have been muted by strong inflows from Chinese investors.  Those purchases could simply reflect mainland investors trying to take advantage of the drop in Hong Kong valuations.  However, there is some chance that the purchases also come from state-owned entities under the direction of the central government, which wants to maintain Hong Kong’s attractiveness as a global financial center.

India: The Hindu nationalist government of Prime Minister Narendra Modi announced that it would relax some of the communications and social restrictions it imposed on Jammu and Kashmir on August 5, when it said it would withdraw the Muslim-majority region’s autonomy.  To date, the clampdown seems to have been successful in limiting protests against the loss of autonomy.  However, while the government’s justification for the move was largely economic, the clampdown has reportedly brought the region’s economy to a standstill.

Mexico: Banco de México yesterday cut its benchmark short-term interest rate to 8.00%, marking its first rate cut in five years.  The policymakers said the 4-to-1 vote to cut the rate was based largely on the fact that Mexico’s inflation rate has recently moderated, leaving the “real” benchmark rate too restrictive.

North Korea: The North Korean military launched two more short-range ballistic missiles today, marking the fifth test firing in the last month.  The missile tests are largely an effort to protest the current U.S.-South Korea military exercises, but it’s important to remember that the tests also give the North Koreans a chance to refine and improve their missile technology.

Venezuela: China announced it will stop buying oil from Venezuela in response to U.S. sanctions.  There are reports that Maduro is cracking down hard on the military with suspected coup plotters facing torture or worse.  This strategy is risky because if Maduro decides to pick on the wrong military figure then the brass might turn on him, and that would almost certainly end his time in office.

Iranian oil tanker released: Gibraltar has released a Iranian oil tanker that was being held by the Royal Navy.   If this action signals a de-escalation of tensions, it would put downward pressure on oil prices.

United States-Greenland: A report yesterday afternoon said President Trump has expressed an interest in having the United States buy Greenland.  The general response so far seems to be incredulity and irritation on the part of Denmark (which owns Greenland) and pushback even from right-wing Danish politicians.  However, to gauge how far this could go, it’s important to remember some historical precedents.  President Jefferson’s purchase of the Louisiana Territory and Seward’s purchase of Alaska will be on everyone’s mind, but there are much more direct precedents, too.  In 1916, the U.S. bought the Danish West Indies, which we now know as the U.S. Virgin Islands, to make sure they didn’t fall into German hands as a result of World War I.  Then, in 1946, President Truman offered to buy Greenland for $100 million, but Denmark rejected the idea.  A key reason for Truman’s interest in the purchase was national security.  The U.S. ultimately gained an air base at Thule, north of the Arctic Circle, and to this day it maintains multiple radar and other military assets on the island that are vital to the developing competition with China and Russia in the far north.  In fact, the U.S. last year took steps to thwart a Chinese effort to build three airports in Greenland.  Finally, the island also has valuable natural resources that may have caught Trump’s eye.  We’ll see if this develops into anything more.