[Posted: 9:30 AM EDT] A bit of risk-on has returned this morning.  Trade hopes appear to be the key reason.  The dollar is a bit weaker, while equities and commodities are higher as are Treasury yields.  Here is what we are watching today:

China trade talks: China is sending the Commerce Ministry’s Vice Minister Wang Shouwen to Washington for what are being described as “low level” trade talks.[1]  China announced measures to liberalize foreign participation in its finance sector in a bid to find allies among U.S. financial firms.  The U.S. side will be represented by David Malpass, the undersecretary for international affairs at the Treasury.  Given the low profile of these talks, we would be surprised if much comes from them, but the fact that talks are occurring at all is being taken optimistically.

The Italian bridge problem: Last week, a span in Italy collapsed; reports vary but there may be as many as 40 fatalities.  This tragedy is rapidly becoming a political problem for the Five-Star Movement, the left-wing populist party in the governing coalition.  According to reports, leaders in the party strongly opposed plans to refurbish and upgrade the bridge, apparently for environmental reasons.[2]  The party described safety fears about the bridge as “children’s tales.”[3]  In the wake of the bridge’s collapse, Five-Star leaders are scrambling to contain the damage.  The League, the right-wing populist party in the coalition, is a strong supporter of infrastructure projects and will likely use the event to further marginalize its coalition partner.  If the scandal broadens, it would not be a huge shock to see Berlusconi’s party try to crack the coalition which would further move the government to the right.

Turkey update: Turkey was able to secure $15 bn of direct foreign investment from Qatar.[4]  Although helpful, it won’t be nearly enough to bail out Turkey.  Unfortunately, by supporting the Muslim Brotherhood and opposing the blockade on Qatar, Turkey probably won’t be getting any help from the other Gulf States.  The U.S. is showing no signs of backing down; VP Pence warned of additional measures if Turkey doesn’t release Andrew Brunson.[5]  And, the U.S. has indicated the steel tariffs will remain even if Brunson is freed[6] (which begs the question as to why Erdogan would release Brunson if he doesn’t get anything in return).

For some perspective, we built a purchasing power parity model for the TRY.  Here is a chart of the results. 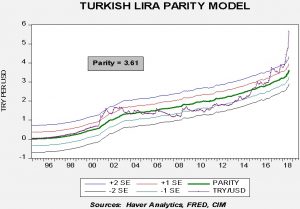 Purchasing power parity values exchange rates based on relative inflation; the idea is that in a higher inflation nation, the exchange rate will depreciate to make prices equal.  It is far from perfect as a valuation model because not all goods are tradeable and completely harmonized inflation indices are not really available.  But, at extremes, it is a useful tool.  We are using the monthly average exchange rate in this model.  At present, the current exchange rate is nearly six standard errors from parity, meaning the TRY is incredibly cheap.  Once this crisis passes, Turkey’s exports will be very competitive…if they can avoid permanent trade impediments.

More on the BOJ: A former BOJ member told Reuters that the central bank may allow the 10-year JGB yield to rise up to 40 bps, in effect, creating a platform for “stealth” rate hikes.[7]  Hideo Hayakawa indicated the bank would let rates rise as long as it doesn’t trigger an unwelcome appreciation of the JPY.  That is probably not possible; the yen is deeply undervalued and any sign of tightening, especially of this magnitude, would likely trigger a jump in the exchange rate.

China returning to form: Since the Great Financial Crisis, China has been dealing with oppositional policy goals.  On the one hand, it wants to tame its massive debt situation, which was caused by maintaining growth after global export markets weakened in the aftermath of the crisis.  At the same time, it wants to maintain high growth rates.  Addressing one problem exacerbates the other so we have tended to see moves to reduce debt until growth slows and then the government fosters additional investment spending (adding to the debt) to lift growth back to target.  According to Reuters, China is at it again, addressing weakening growth by increasing infrastructure investment.[8]  This will alleviate the immediate growth problem at the cost of worsening the debt problem.

Wonder where the tax cuts are going?  So did we.  Apparently, we are dining out. 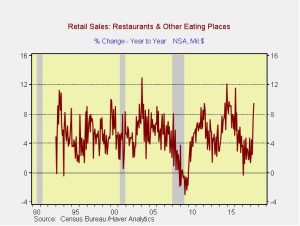 This chart shows retail sales at restaurants.  At the beginning of the year, sales were rising 1.4% per year.  In June, they were up 9.5%.  And, we aren’t spending it at fast food restaurants, either.  Full service restaurant sales are up 13.6%. 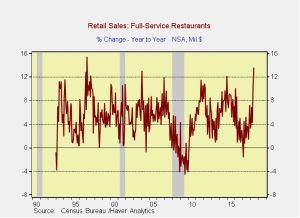 This chart shows current crude oil inventories, both over the long term and the last decade.  We have added the estimated level of lease stocks to maintain the consistency of the data.  As the chart shows, inventories remain historically high but have declined significantly since March 2017.  We would consider the overhang closed if stocks fall under 400 mb.  This week’s increase in inventories was quite unexpected, especially given that refinery utilization jumped to 98.1% of capacity, up from 96.6% last week.  Oil imports rose sharply, to 9.0 mbpd, up over 1.0 mbpd from the prior week.  And, oil exports fell modestly as well.  We do note that U.S. production rose 0.4 mbpd to 10.9 mbpd. 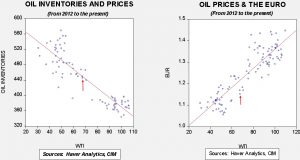 Based on inventories alone, oil prices are near the fair value price of $69.50.  Meanwhile, the EUR/WTI model generates a fair value of $57.34.  Together (which is a more sound methodology), fair value is $61.08, meaning that current prices are well above fair value.  The combination of a stronger dollar and unexpectedly high crude oil inventories is bearish.  We were rather surprised by this week’s build but it may be due to unusually low stockpiles at the delivery hub in Cushing, OK.  Stocks at the hub fell to 21.8 mb last week, an unusually low level.

There have been discussions in the media about these low stocks causing potential delivery problems.  The tanks cannot be completely drained without causing problems; the DOE estimates that 15.0 mb is probably the working minimum.  Thus, the jump in imports may be designed to address this shortfall at Cushing and thus isn’t really a build in inventory for immediate use.  We will be watching this in the coming weeks to see if imports remain elevated to boost Cushing stocks.