[Posted: 9:30 AM EDT] Equity futures have rebounded in the past hour, likely on news that President Trump and Chairman Xi are exchanging letters and talking on the phone.  Economic worries continue to dominate.  And, how will we remember the Hickenlooper campaign?  Here is what we are watching:

Economy and markets: Equity markets took a beating yesterday, while interest rate markets enjoyed a strong rally and the 30-year T-bond dipped under 2% for the first time in history.  Global equities continued to weaken overnight as China vowed to retaliate against U.S. tariff measures.  Adding to worries were vague comments from President Trump, who, for the first time, appeared to link the tensions in Hong Kong to trade talks.  Some of the president’s advisors have been pressing for a hardline reaction to China’s handling of the situation, but so far the president has resisted commenting strongly on this issue.  However, as we noted above, we have seen a rebound develop after it was revealed that the two leaders have been in contact.

Equities have been slumping on worries about global growth.  There are reports noting that the growing trend of economic nationalism is playing havoc on global trading patterns.  Even the reliable WSJ editorial page is becoming critical of White House trade policy.

However, the yield curve is front and center in market and media commentary as the two-year/10-year spread inverted yesterday.  As we have noted, several other permutations of the yield curve have inverted already, including the fed funds/10-year, which is used by the Conference Board in calculating the leading economic indicators.

Journalists, seeking clarity, correctly indicate that each recession has been preceded by an inversion of some sort.  This is true, as far as it goes.  However, it is rare for the media to delve into the notion of the “false positive,” a signal that isn’t followed by an event.  The yield curve is a powerful indicator, one that should not be ignored.  However, it isn’t perfect and has been subject to false positives in the past. 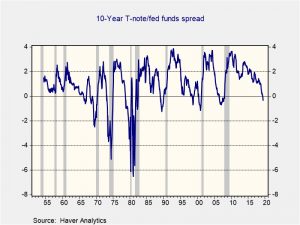 Let’s use the 10-year/fed funds measure as an example.  This indicator failed to invert for the 1957 and 1961 recessions, but, since then, it has inverted prior to each downturn.  However, it also signaled two false positives, one in the mid-1960s and one in 1998.  In both those cases, a recession was avoided due to aggressive actions by the FOMC to cut interest rates.  So, if the Fed were to act aggressively, a recession might be avoided; simply put, it isn’t inevitable.  But, the odds of a downturn are elevated, and that fear has weighed on financial markets.

We would not be surprised by an equity market recovery in the wake of yesterday’s drop.  As we see in this morning’s activity, glimmers of hope on trade are enough to trigger rebounds.  After all, as the above chart indicates, the inversion tends to predate the recession by a rather long period.  Nevertheless, it does make sense to be aware that the odds of recession are elevated.

Japan-South Korea: In a speech today, South Korean President Moon Jae-in struck a conciliatory tone toward Japan, vowing to “join hands” with Japanese leaders if they choose dialogue to overcome the continuing dispute concerning Japanese-Korean relations before and during World War II.  This adds to evidence that the countries may be ready to step back from the dispute in which both sides have weaponized trade rules.  Reports yesterday said senior Japanese and South Korean officials will meet on the dispute in Guam on Friday and Saturday.  Separately, Japanese Emperor Naruhito today repeated his father’s groundbreaking expression of “deep remorse” for Japan’s behavior in the 1930s and 1940s.

Hong Kong: There are more reports of Chinese security personnel amassing near Hong Kong, with one article discussing how tens of thousands of Chinese military police are conducting drills in a large sports stadium in Shenzhen.  Satellite imagery shows over a hundred armored personnel carriers and other vehicles parked inside the facility.  Officials claimed that previous drills were merely in preparation for the anniversary of the People’s Republic of China on October 1, but the apparent continuation of security deployments raises the prospect that Beijing is about to clamp down on anti-Chinese protestors in Hong Kong – a move that would probably have painful political and economic costs for China and further undermine global investor sentiment.  One especially important implication of a violent crackdown is that it would signal to the Taiwanese that they could be subject to the same treatment.  Taiwan is also becoming increasingly leery of China’s intentions under the nationalist policies of President Xi Jinping.  Today, Taiwan’s government released a plan to boost its defense spending by 8.3% in 2020.  That would be the island’s biggest defense budget boost since 2008.

United Kingdom: Labour Party leader Jeremy Corbyn has released a plan to thwart Prime Minister Johnson’s apparent intention for a no-deal Brexit.  Under Corbyn’s plan, a coalition of opposition parties led by Labour would try to bring down the Johnson government via a no-confidence vote in early September.  Labour would then try to form a temporary government whose mandate would be limited to asking the European Union to extend the current Brexit deadline of October 31 and call new elections.  In any such elections, Corbyn vowed that Labour would run on a platform of holding a new referendum on Brexit.  At least some opposition parties have already expressed reservations about the plan, especially due to its slant toward Labour, in general, and Corbyn, in particular.

Canada: The government’s independent ethics watchdog said Prime Minister Trudeau violated conflict-of-interest laws when he pressured his former attorney general to settle a corruption case against the Canadian engineering company SNC-Lavalin (SNCAF, 12.99).  The controversy is old news, but the formal decision by the ethics board is likely to further undermine Trudeau’s position in the country’s October elections.

United States-Iran: Just when the United Kingdom and Iran seemed ready to resolve their dispute over the Iranian oil tanker Grace 1, which Britain detained in Gibraltar last month, the U.S. Department of Justice today filed a motion in Gibraltar to seize the ship.  The British originally seized the ship for violating sanctions against Syria, but the legal basis for the U.S. motion isn’t clear.

Argentina: President Macri has announced several emergency economic measures aimed at stopping the plunge in the Argentine currency and shoring up the economy.  The peso and the economy are in a tailspin after Macri’s poor performance in last weekend’s primary elections sparked concern that the populist, unorthodox Peronists will return to power.  However, the emergency measures, such as a hike in the minimum wage and a freeze on gasoline prices, may not be sufficient enough to make a difference.

Cybersecurity: As we continue to see signs of a political shift toward increased economic sovereignty and higher regulation in at least some areas, it appears that cybersecurity may be one reason for a clampdown on the technology industry.  Reports today say the hacker who stole huge amounts of cloud-based data from Capital One (COF, 83.45) also broke into more than 30 other firms’ cloud systems.  Democratic Senator Ron Wyden of Oregon is demanding that cloud service providers take further action to protect data.

Based on our oil inventory/price model, fair value is $60.84; using the euro/price model, fair value is $50.96.  The combined model, a broader analysis of the oil price, generates a fair value of $53.62.  We are seeing a clear divergence between the impact of the dollar and oil inventories.  If President Trump is successful in bringing the dollar lower, it would be bullish for oil prices.  Recession fears are acting as a bearish factor for oil prices as well, overcoming worries about geopolitical disruptions.