[Posted: 9:30 AM EDT] Risk-off has returned with a vengeance this morning.  Despite a continued lift in the Turkish lira (TRY), global equity markets are lower.  Some of this decline is being driven by a stronger dollar and cratering commodity prices.  Here is what we are watching today:

Contagion fears:[1] The current weakness in emerging markets has raised fears that another 1997 is looming.  In 1997, the Asian Economic Crisis, which started in Thailand, spread throughout Asia and into South America.  It even led to the Russian Debt Default in 1998.  Our position is that another event of similar magnitude isn’t likely because most emerging economies now use floating exchange rates.  In the late 1990s, most emerging economies used fixed exchange rates that gave emerging market borrowers confidence that they could borrow in hard currencies at lower interest rates without fear that debt service costs would rise due to currency weakness.  Unfortunately, the pegs were not sustainable and debt service costs soared when the currencies reset, forcing a whole series of countries to go to the IMF for support.

To compare the 1997 situation, we will use Indonesia as an example.  First, in 1997, the rupiah was overvalued. 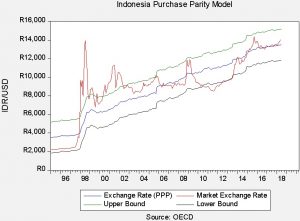 This chart shows a purchasing power parity model for the Indonesian rupiah; parity is based on relative inflation rates between Indonesia and the U.S.  The currency is quoted in rupiah/USD, which means a higher number indicates a weaker currency.  Before the crisis, the exchange rate was fixed at roughly 2,500 per dollar.  The parity rate was closer to 3,800 per dollar.  When the crisis hit, the country allowed its currency to float; it depreciated rapidly, hitting 14,000 before settling in around 8,000.  Because currencies are so basic to the functioning of an economy and are difficult to value, there is often a tendency to overshoot parity during a crisis.  Although this hurts initially, the currency weakness does tend to improve export competitiveness and sow the seeds of recovery.  And, that’s what we saw with Indonesia. 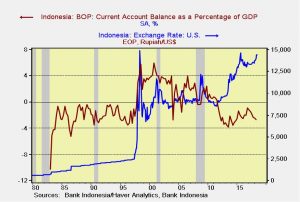 Although the use of floating exchange rates should prevent the discrete collapses that characterized the 1997 Asian Economic Crisis, it doesn’t mean that problems won’t develop.  We note that Indonesia unexpectedly raised rates 25 bps to 5.25% overnight in a bid to stabilize the currency.  Fears of broader emerging market weakness, triggered by the stronger dollar, trade concerns and Fed tightening, are legitimate concerns.  But, we don’t expect a repeat of 1997; if we are correct in this assessment, we shouldn’t see the sudden collapses in exchange rates that we saw during that earlier event.  That doesn’t mean we won’t see further pressure, but the “glide path” lower should be more manageable.

Turkey: The TRY did rebound overnight after the Erdogan administration halved the limit on total forex swaps to 25% of banks’ shareholder equity.  Although this won’t stop Turkish citizens who want to protect their liquidity from buying dollars, it will reduce the ability of professional investors to short the currency with leverage to gain from further weakness.

As this chart shows, the TRY bounced overnight.  We doubt this action can be maintained but it does appear the shorts are worried about a recovery; in other words, if Turkey releases the pastor or boosts interest rates, the shorts could be caught.  Thus, we are seeing what should be described as skittish market action.