[Posted: 9:30 AM EDT] It’s mid-week in what has been a busy week.  President Trump blinks (sort of) on trade.  Equity markets don’t follow through, mostly due to lingering trade uncertainty and mounting evidence of global economic weakness.  Hong Kong remains a flashpoint.  Here is what we are watching:

Trade: In a surprise move, President Trump announced delays in the majority of announced tariffs until December 15.  Looking at the goods affected, there was a clear decision to avoid tariffs on consumer goods before Christmas.  Risk assets were emboldened by the announcement.  All in all, more than $150 billion of goods were affected by the delay.  Both sides agreed to resume negotiations.

This action appears tactical in nature.  Delaying the implementation doesn’t mean they have gone away.  It is interesting that the president framed the action as a way to avoid issues for the holidays, perhaps a tacit acknowledgement that consumers may pay at least some of the tariffs.  If that is true, then delaying the tariffs into the year before elections is a risky ploy.  It also signals to China that the White House may be less tolerant of inflicting pain on the U.S. economy and therefore may make Beijing less open to concessions.

If the goal was to lift confidence and financial markets, the effect was short-lived.  Risk markets did rally strongly but are giving back everything today.  Equities, from a technical perspective, are starting to look soft; fading rallies is not a good sign.

What happens as we approach December 15?  We suspect it will all depend on how the economy looks.  If the economy is struggling, the tariffs may remain in place.  At the same time, there will be a political calculus at work as well.  If the president believes the tariffs improve his chances of reelection, they will probably go forward.  But, overall, we think the economy will be the key variable and we would envision further delays if deceleration continues. 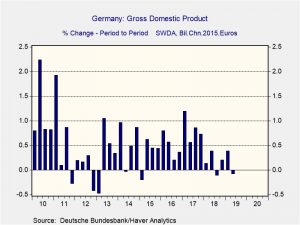 Although the data was near expectations, a negative reading isn’t welcome and the odds of two consecutive negative quarters, the “working” definition of recession, is highly likely.  This data highlights the fact that the major European nations are likely in a downturn.  German economic sentiment fell to its lowest level since 2011.

China released a series of weak numbers as well.  Industrial production came in weaker than forecast, at 4.8% (Y/Y%), well below the 6.0% expected.  As the chart below shows, this is the weakest showing since 2008. 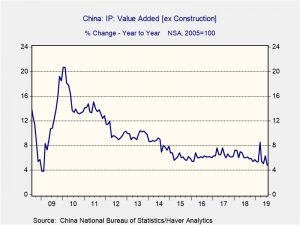 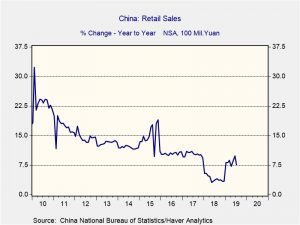 This data raises questions about the effectiveness of Chinese stimulus measures.  Given China’s history (and the continued problems in Hong Kong), we would expect the Xi administration to return to more aggressive stimulus measures if the economic slowdown continues.

Slumping global growth will almost certainly bring easier policy from the FOMC.  As various permutations of the yield curve either invert further or approach inversion, the signal from the financial markets is clear that the Fed needs to cut rates.  Unfortunately, given the fact that we had two dissents last meeting, it may be hard not only to lower rates but to move more than 25 bps.  The other worry, of course, is that a rate cut might not matter all that much.

Finally, it’s worth noting that the Eurozone and China are both export-dependent.  Germany has essentially turned the Eurozone into a broader version of itself, making it heavily dependent on foreign sales, and China’s development model was based on exports.  Thus, the trade conflict is affecting China and Europe much more than the U.S., which is less dependent on exports for growth.

Yield curve inversion: Today, U.K. and U.S. bonds inverted after a stream of bad economic data from Germany and China triggered a flight to safety into 10-year bonds.  Because yield curve inversions have a strong track record of predicting recessions, they are often followed closely by investors.  That being said, the yield curve inversion in the U.K. is probably the bigger concern as its economy had contracted in Q2 and there are still growing concerns about the impact Brexit will have on the economy.  Meanwhile, the U.S. yield inversion has grown; the yield on the 10-year Treasury was already lower than the three-month Treasury bill.  At this time, we do not expect a recession to take place in the U.S. in the immediate future as consumption still appears strong, but we are becoming more vigilant as financial markets appear to be sending a strong signal that the economy may be more vulnerable than we realize. 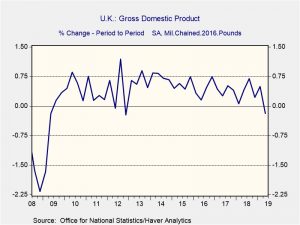 Hong Kong: The scene at the Hong Kong airport was tense yesterday as violence erupted.   Apparently, protestors attacked two men thought to be undercover agents for Beijing.  Police attacked protestors in response; there was a moment when it appeared police were about to open fire on the demonstrators.  There were social media pictures suggesting the PLA is mobilizing, although this wasn’t confirmed by the Pentagon.  There is now a court order barring the protestors from the airport and officials are taking steps to prevent anyone other than passengers to enter the airport terminal.  Hong Kong police have brought a hardline former deputy commissioner out of retirement and actions by police have become more hostile since his return.  Chinese media is actively spreading disinformation about the protests, trying to frame the protestors as “terrorists,” perhaps to give them an excuse to use heavy force.  A British MP has indicated he thinks the U.K. should issue passports to Hong Kong citizens, an action that would infuriate Chinese leaders who often refer to the colonial period of British domination to stir nationalist sentiment.  Finally, companies operating in Hong Kong have been activating contingency plans as unrest continues.

Italy—populist coalition collapse?  On Tuesday, Matteo Salvini failed in his plans to call early elections, which will be needed for him to shore up support for his reforms.  Last month, Salvini’s party, the Northern League, was unable to get reforms that included tax cuts through parliament after members of its coalition in the Five-Star party failed to support the reforms.  Following the defeat, Salvini has been angling to call snap elections, a move that might see him become the new prime minister of Italy.  Salvini’s popularity appears to be on the rise, while support for the Five-Star movement has fallen in recent months.

Despite his failed attempt to call a vote on Tuesday, a no-confidence vote is expected to take place on August 20.  If the vote succeeds, Prime Minister Giuseppe Conte will have to submit his letter of resignation and new elections will be held.  In the event of new elections, the Northern League would be expected to win a plurality of the seats, but there are rumors that the Five-Star Movement could align with the Democratic Party to block Salvini from becoming prime minister.  Nevertheless, if Salvini does become prime minister it will likely raise the possibility of Italy’s exit from the Eurozone, which should weigh on the euro and possibly European equities.

The chart above shows how the prediction markets view the likelihood of the dissolution of the Italian government before the end of the year, with each cent representing a percentage point.  As of yesterday, the prediction markets value the possibility at about $0.76, which suggests there is about a 76% chance of the Italian parliament dissolving.  At the same time, even though there will be a no-confidence vote on August 20, it isn’t likely that snap elections will follow anytime soon.  Instead, the coalition leaders have decided to keep the government in place until a government restructuring law is passed.  This action could take up to a year.