[Posted: 9:30 AM EDT] There was a lot of news over the weekend.  Here is what we see as important:

North Korea fears ease: Although worries remain about an escalation of tensions with North Korea, as we noted last week, there is no evidence of U.S. mobilization for an attack on the peninsula.  There are no carriers near North Korea, there have been no evacuations of American civilians from South Korea and no overt preparations for war (e.g., confining troops to base, increased training activities).  Although the president’s comments are clearly belligerent, his words are not a real signal of a march to war.  We suspect this is a bargaining tactic, one that he has used in his private sector life.  The problems with this sort of rhetoric are twofold.  First, it creates the “boy crying wolf” problem.  The more he makes statements that appear stronger than what the U.S. is ready to implement, the less foreign powers will pay attention.  Second, a president must be careful in his threats because they can bolster the foreign power that is the target of ire.  Think of President Bush’s “axis of evil.”  One of these powers has collapsed, while the other two have either developed nuclear weapons or were at the brink before deals were brokered.  Foreign governments must take threats from the superpower seriously.  By threatening North Korea (and Venezuela, too), the leader can now legitimately argue that the country faces an existential threat and should back the person in office.  It also supports building weapons of mass destruction to protect from regime change.  Still, for now, an easing of tensions has led to a reversal in risk-off trades from last week—the dollar and equities are stronger, while bonds, gold and forex are weaker.

Not much of a correction: Last week we did see a pullback in equities.  However, the major indices rose on Friday and are higher this morning.  Although we remain concerned about the level of complacency in the financial markets, there appears to be simply too much available liquidity to investors to sustain a major correction.  The chart below shows the level of retail money market funds along with the S&P 500.  The orange bars show periods where retail money market funds approached $900 bn.  These periods coincided with equity markets eventually losing momentum and correcting.  Current levels are well above $900 bn, suggesting that there is ample cash available to buy equities.  Until we approach $900 bn in money markets, we expect selloffs to remain shallow.  Of course, events and recessions can overwhelm cash; the former is a worry, the latter much less so. 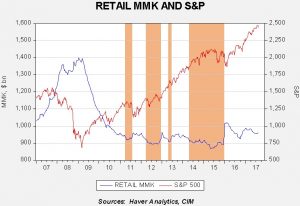 Trade: Today, President Trump is expected to unveil an executive order investigating Chinese appropriation of U.S. technology which would prepare for trade restrictions if such a finding is made. The administration had delayed this action while the UNSC was negotiating sanctions on North Korea, but now, with sanctions in place, the president has decided to move forward.  China is very concerned about trade restrictions; we expect China to react with promises to build productive capacity in the U.S. as a way to blunt trade impediments.  The U.S. is also expected to begin formal NAFTA reform negotiations later this week.

Charlottesville: We won’t recap the weekend events because that is being done across the media.  Here is the issue we are watching.  The GOP establishment doesn’t want to be associated with the alt-right.  Right-wing populists are less opposed to this group.  The split in the GOP is becoming increasingly obvious and will be a threat to Republican elections over the next three years.  There are rumors that Steve Bannon may be ousted from the White House.[1]  If he goes, the influence of right-wing populists will be diminished, though not completely eliminated.  On the other hand, the Democrat Party faces similar divisions.[2]  We note that there were four major candidates in the 1860 presidential election.  Although Lincoln won easily in the Electoral College, he took less than 40% of the popular vote.  Current political divisions are deepening.  How this affects financial markets remains to be seen, but a +20 P/E for the S&P seems inconsistent with volatile political divisions.