[Posted: 9:30 AM EDT] Commentary from the White House remains belligerent, but U.S. equity futures appear to be stabilizing.  Here is what we are watching:

U.S. v. North Korea: In a press event yesterday, President Trump doubled down on his bellicose rhetoric against North Korea.  He added to it this morning, saying the U.S. has prepared “military solutions” that are “locked and loaded.”  Although we are sure some plans are in place, we also note that there are no carrier groups in theater; the U.S.S. Carl Vinson and the U.S.S. Theodore Roosevelt are both in training exercises off the U.S. West Coast.  The U.S.S. Nimitz, which was in the Far East in the spring, is now in the Persian Gulf.  We estimate that two of these vessels could be near North Korea in two to three weeks.  We also note that “non-essential diplomatic and military personnel” in South Korea have not been ordered to leave.  If a major military operation is to be executed, we would expect two and preferably three carriers in the Far East and non-essential personnel to be evacuated.  Thus, any military operations that could be executed now would be air attacks from Guam, Japan and South Korea.  Although potent, attacks from these sources would be limited.

We were actually more interested in comments from SOD Mattis yesterday, who warned North Korea to “cease any consideration of actions that would lead to the end of its regime and destruction of its people.”  Although Mattis is still pressing for a diplomatic solution to the current problems with North Korea, this warning should be taken seriously; attacking the U.S. will lead to an overwhelming response that will likely lead to the end of the Kim regime.  Essentially, Mattis is suggesting that a military strike on the U.S. could trigger a devastating response.

We still think the odds of an actual conflict are low, but the risk is rising.  It will be interesting to see how financial markets handle today’s market close.  Does a trader want to go home for the weekend with a levered long position in equities?

The problem of positioning: As we have noted before, the Federal Reserve appears to be attempting to manage financial conditions as an unofficial third mandate.  All the financial conditions indices we monitor remain at low levels (although they will tick up next week).  We have serious doubts as to policymakers’ abilities to manage financial stress, but it does appear that low interest rates and perhaps an enlarged balance sheet have given investors comfort.  In response to the third mandate, investors have been increasingly shorting volatility.  The position has worked.

This chart overlays the VIX ETF (VXX, 13.29) and the inverse VIX ETF (XIV, 78.18).  Over the past five years, holders of the VXX have suffered huge losses, while holders of the XIV have done well, especially since mid-2016.  Obviously, yesterday we did see a spike in volatility and the XIV dropped sharply.  Our concern is that investors have taken the “don’t fight the Fed” advice with regard to the third mandate and have increasingly shorted volatility.  The problem is that the Fed doesn’t have direct control over financial stress.  Thus, this positioning by investors aligns with the goals of policymakers; sadly, policymakers lack the tools to enforce their goals.  Shorting volatility is a bit like “pocketing nickels in front of freight trains.”  The position works well most of the time but, when it doesn’t, the reversals can be significant.  Our worry is that if investors decide to abandon these short volatility positions, it could lead to selling pressure in the equity markets as money managers who target volatility will be forced to reduce share levels as volatility rises.

With the release of the CPI data and yesterday’s FOMC action, we can upgrade the Mankiw models.  The dip in the core CPI rate (see below) did affect the Mankiw Rule model results.

The Mankiw rule models attempt to determine the neutral rate for fed funds, which is a rate that is neither accommodative nor stimulative.  Mankiw’s model is a variation of the Taylor Rule.  The latter measures the neutral rate using core CPI and the difference between GDP and potential GDP, which is an estimate of slack in the economy.  Potential GDP cannot be directly observed, only estimated.  To overcome this problem with potential GDP, Mankiw used the unemployment rate as a proxy for economic slack.  We have created four versions of the rule, one that follows the original construction by using the unemployment rate as a measure of slack, a second that uses the employment/population ratio, a third using involuntary part-time workers as a percentage of the total labor force and a fourth using yearly wage growth for non-supervisory workers. 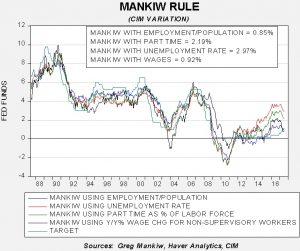 To a great extent, the issue for policymakers remains the proper measure of slack.  The danger for the financial markets is that the proper measure is either wage growth or the employment/population ratio but policymakers believe slack is best measured by either involuntary part-time employment or the unemployment rate.  If one of the latter two is their measure, policymakers will likely overtighten and prompt a recession.  Since inflation remains tame, it probably makes sense for the Fed to hold steady for a while to see if inflation does accelerate.  That’s what we expect the FOMC to do; so does the market.  Fed funds futures are not looking for another rate hike until mid-2018, which is why the dollar is weakening.  As long as inflation remains tame, the pace of hikes will remain slow.

OPEC woes: As we noted yesterday, U.S. commercial crude inventories contracted sharply and have fallen rather impressively this summer.  However, oil prices remain stalled on worries that OPEC output discipline is weakening.  The data support that concern.

This chart shows the Bloomberg estimate of OPEC production, which is consistent with other sources of this data.  Since March, OPEC output has jumped almost 0.9 mbpd, with much of that coming from states that were not given quotas, such as Nigeria and Libya.  Saudi Arabia needs to press the other members to bring this production down if it wants oil prices to rise further.

Grain woes: Grain prices plunged yesterday after the USDA lifted production and ending inventory estimates for corn and soybeans.  The government also lowered its estimates for prices and farm incomes.  Higher inventories and lower prices will put economic pressure on the agriculture sector and give some leverage to China in trade talks.  After all, the economic pressures in the farm belt would be exacerbated if China were to retaliate against American farm products due to trade restrictions it faces from the U.S.