[Posted: 9:30 AM EDT] Global equity markets are lower this morning as tensions surrounding North Korea rise.  There is a growing chorus of commentators warning about a repeat of 1987 (maybe because we are approaching the 30-year anniversary?), which would be momentous because that crash was the last major one that was not associated with a recession.  We have our doubts that a major correction is in the offing but, if it is, it should probably be treated as a buying opportunity.  The softer than expected PPI data (see below) has put some downward pressure on the dollar and boosted Treasuries.  It didn’t have much of an effect on equities. We get the CPI data tomorrow.

North Korea: The Kim regime has indicated it is drawing up plans to fire up to four missiles at Guam, which is a U.S. territory and the home of the Anderson AFB, a major base in the region.  The symbolism of such a threat is high; Guam, although not a state, is close to being one.  Persons born in Guam are American citizens.  The territory has a non-voting delegate to the U.S. House.  It has no electoral votes but it does participate in the primary process, so it has a modest effect on the presidential race.  Thus, attacking Guam isn’t exactly like attacking an American state, but it’s close.  We suspect the Kim government intends to land the missiles in the waters around Guam.  This would represent the closest attack on what should be described as American soil so far by North Korea.  It’s not clear how the U.S. will respond to such a launch if it transpires.  NBC is reporting[1] that the U.S. is drawing up plans to attack North Korean missile sites pre-launch (so-called “left of launch”) that would likely be executed by B-1 bombers[2] currently located in Guam.  Another alternative would be to use anti-missile defense systems to hit North Korea’s medium-range missiles after launch.  Attacking North Korea left of launch risks escalating the situation; not attacking assumes the North Korean missiles will fall harmlessly into the sea and not actually hit Guam.  We are treading into difficult territory here and the steady flight to safety in assets is warranted.

Mixed messages: The “fire and fury”[3] comments from President Trump, which were apparently his own, have been downplayed by his secretary of state and secretary of defense.  We do know that Chief of Staff Kelly has actively worked to limit the reading material of the president to create a consistent message.  Still, with the president’s use of social media and his personality, it will be nearly impossible to prevent such statements.  The worry is how they are interpreted by the rest of the world.  Already, Japan and South Korea are looking to boost their own defenses, in part on concerns that they can’t accurately predict how the U.S. will react to events.  Although we believe this rearming is a natural consequence of the U.S. reducing its superpower role, this process may be accelerating as the world observes how the U.S. behaves in light of foreign policy crises.

Trump v. McConnell: A war of words has erupted between the president and the Senate majority leader.  The latter, citing the lack of experience in the White House, has chastised the president for creating impossible deadlines that lead to the impression of failure on the part of Congress.  The White House has pushed back, suggesting that McConnell is ineffective and should be working more diligently to get legislation passed.  This spat is counterproductive.  All presidents want things to happen fast; political capital is perishable and thus patience isn’t a virtue.  On the other hand, senators only face a vote every six years and not all at once, so a more deliberate pace is part of the legislative structure.  In our observation, the key to speed in the Senate is sequencing.  Presidents should offer the easiest and most bipartisan legislation first to get bills passed quickly even if this legislation isn’t a high priority.  Instead, administrations tend to pursue the most aspired legislative goals that are often partisan in nature and consume lots of political capital and take a lot of time to pass.  If we are correct, President Trump should have started with infrastructure, which would have built his bipartisan credentials and would have passed easily.  Bill Clinton often remarked that he should have started with welfare reform instead of his ill-fated health care changes.  The president will need McConnell to create tax reform (or cuts) and so this argument isn’t helpful toward that goal.

This chart shows current crude oil inventories, both over the long term and the last decade.  We have added the estimated level of lease stocks to maintain the consistency of the data.  As the chart shows, inventories remain historically high but they are declining.  Again, there was no oil sold out of the Strategic Petroleum Reserve this week.  The authorized sale is nearly complete as 16.2 mb have been released out of an authorized 17.0 mb.

As the seasonal chart below shows, inventories are usually well into the seasonal withdrawal period.  Even with the SPR sales, we have already seen a larger than normal seasonal decline; in fact, the drop is rather remarkable.  It should be noted that the seasonal trough isn’t usually hit until mid-September.  Thus, we should see further stock withdrawals over the next five weeks. 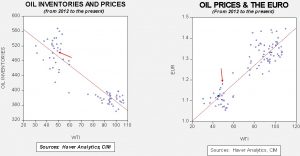 Based on inventories alone, oil prices are overvalued with the fair value price of $49.36.  Meanwhile, the EUR/WTI model generates a fair value of $64.36.  Together (which is a more sound methodology), fair value is $59.54, meaning that current prices are well below fair value.  The most bullish factor for oil currently is dollar weakness, although the rapid decline in inventories is also supportive.  Prices are essentially at fair value based on inventory levels but, thus far, oil prices have completely ignored the weaker dollar.  We do expect that the dollar will begin to have a bullish impact on oil prices in the coming weeks.

[2] One of the reasons for using B-1s is that they are no longer fitted to carry nuclear weapons.  Thus, there would be no confusion from North Korea misconstruing this as a nuclear attack.