[Posted: 9:30 AM EDT] The dollar fell overnight as the market adjusted its expectations lower for a rate hike.  The market-implied probability of a Fed rate hike in September is 22%, and the likelihood reaches 52% in May 2017.  The yields on 10- and 30-year U.K. bonds fell to record lows after the Bank of England indicated it will continue with its uncovered QE operations as planned.

According to reports, Saudi Arabia pumped oil at a record level of 10.67 mmbpd in July.  Production surpassed the previous record monthly production of 10.56 mmbpd in June 2015.  The rise in production was said to stem from increased domestic demand.  At the same time, major OPEC producers met in Doha on Monday to discuss options for stabilizing the market, mostly by imposing caps on output.  Saudi Arabia’s position has been that the country will not agree to production caps unless Iran also imposes caps on its production.  However, Iran has refused to cap production as it recovers its exports after sanctions were lifted.

In a separate monthly report, OPEC warned that weakness in the oil markets is likely to persist as supplies remain high and the end of the summer driving season comes to an end, leading to a possible downward correction in prices.  The chart below shows domestic crude inventory patterns.  Although domestic stockpiles did not see the usual accumulation “hump” during the summer, we are now at seasonally average levels. 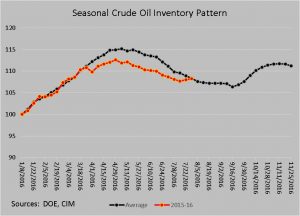 Refining margins have been squeezed recently due to a high level of product inventories, which means that refiners’ demand for crude could fall.

Palladium prices reached their year high on the back of strong Chinese car sales and supply concerns from Russia and South Africa.  The metal is up 37% since its most recent low in June.  The chart below shows the metal’s price over the past year.  Palladium’s gains are also supporting the rest of the precious metals complex, especially platinum.