Good morning!   Markets are dealing with the aftermath of the Fed meeting.  China is slow-walking trade. The BOE met today.  Osama bin Laden’s son is believed to have died.  The MLB trade deadline big winner was Houston, with Atlanta coming in a close second.  Here is what we are watching this morning:

The Fed: The FOMC generally did what was expected—the fed funds target was reduced by 25 bps and quantitative tightening has ended.  However, beyond that, the financial markets view the Fed’s action as relatively hawkish.  First, Chair Powell characterized the policy actions as “a mid-cycle adjustment.”  This comment, coupled with confirmation later in the press conference, suggests that this rate cut doesn’t signal a new rate cutting cycle.  Instead, to use a historical context, it is more like 1995.  Essentially, the Fed has admitted it moved rates too high and is adjusting rates to a level better suited to current conditions.  Powell did suggest that yesterday’s cut may not be enough for current conditions, but if the financial markets thought this was the beginning of 100 bps of easing into early next year, that probably isn’t the case.

Powell did note that the rate cut was also tied to the perceived decline in “neutral rate” which does indicate the Phillips Curve model still has some influence on members of the FOMC.  He mentioned global concerns and the trade conflict as well.  Although these issues do offer a potential path for future easing (e.g., weaker overseas growth could trigger additional rate cuts), these factors probably are less important than they appear.  The dissents tend to undermine these other issues as having an effect on future rate moves.

Specifically, there were two dissents.  KC FRB President George’s dissent was no surprise. She is a traditional hawk that would rely on the Phillips Curve for guidance.  Given that labor markets remain tight, it is consistent that she would oppose the action.  Boston FRB President Rosengren’s dissent is far more interesting.  He is what we would characterize a “financially sensitive” voter; his opposition to a rate cut is based on the idea that it would lead to excessive risk taking in the financial markets.  We examined this class of voter in an earlier AAW.  In general, what we found was that when the 12-week moving average of the VIX was below 20, this class of voter tended to support rate hikes.  And so, the recent drop in the VIX probably explains Rosengren’s dissent, which was telegraphed.   With two dissents, the odds of further rate cuts will be challenging. 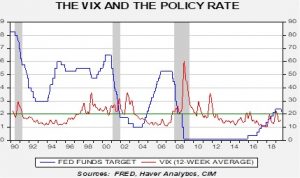 Financial markets reacted by treating the action as hawkish.  Gold prices fell, the dollar jumped, the yield curve flattened and equities slid.  To some extent, the reaction was probably a bit excessive but it is clear the financial markets wanted more and are now bringing back the risk of recession.   President Trump was critical of the easing, suggesting it was inadequate.

Interestingly enough, the two-year deferred Eurodollar futures implied rate didn’t change.  Although the spread compared to fed funds narrowed because of the cut, the projection of fed funds two years from now is still on pace for the 1.65% level (or a ceiling rate of 1.75%), meaning that three more rate cuts remain imbedded in financial markets. 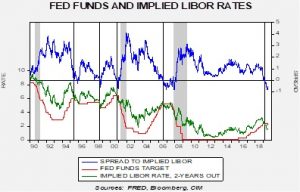 In the final analysis, if Chair Powell wanted to move more than what we saw yesterday, he hasn’t convinced enough members of the committee to follow him.  There were two significant clues for the Fed from the actions of the financial markets.  The first is the yield curve.  If the financial markets viewed the easing as stimulative, the yield curve would have steepened.  The fact that it flattened is a clear indication the financial markets believe the Fed move and the consequent signaling was inadequate.  The second is strengthening of the dollar.  Given the dollar’s current high valuation, a policy change to easing should have led to a weaker greenback.  The fact it rallied suggests the action was taken as non-stimulative.  We should also note that the Fed’s modest action is occurring in a backdrop where the ECB is considering more aggressive actions and the BOJ is looking at allowing the JGB’s to fall into deeper negative territory.

The White House has been increasing its focus on the exchange rate markets, in our opinion, because the president has figured out that currency depreciation blunts the impact of tariffs.  Although the Treasury has exchange rate policy in its mandate, it has limited tools to affect the rate.[1]  As we have been discussing, the White House appears, at least to us, to be moving toward undermining Fed independence in order to fix the dollar’s exchange rate lower.  Interestingly enough, now Congress is getting involved.  Senators Baldwin (D-WI) and Hawley (R-MO) have introduced a bill that calls for a weaker dollar.  It is starting to look a little like 1985 and the run-up to the Plaza Accord.

The BOE:  The Bank of England left policy rates unchanged but did reduce U.K. growth forecasts due to the uncertainty surrounding Brexit.   The GBP rose modestly on the news.

Iran:  The U.S. has applied personal sanctions to Javad Zarif, Iran’s foreign minister.  This action will make it more difficult to begin negotiations.  However, the U.S. has also granted waivers to foreign nations participating in Iran’s civilian nuclear projects.

Trade talks:  China’s negotiating tactics have shifted to stalling as it appears officials are considering the status quo to see if anything changes after the elections.  China isn’t pleased with this characterization.   The Trump administration is restraining comments on the situation in Hong Kong, fearing that siding with the protestors might set back trade talks.  China is apparently moving on grain purchases, preparing to import from the U.S.

In what may be a new front in the U.S.-China trade dispute – or at least a new sore point – U.S. authorities have indicted a Chinese aluminum magnate on charges that he sidestepped anti-dumping duties on millions of pallets of aluminum brought into the United States from 2011 to 2014.  The U.S. attorney for the central district of California said Liu Zhongtian’s “rampant criminality” not only posed a threat to U.S. industry, livelihoods, and investments, but also artificially inflated the value of his Hong Kong listed China Zhongwang Holdings (1333.HK, 3.44).  More broadly, the U.S.-China trade dispute continues to weigh on manufacturing throughout the Asia-Pacific region.  As shown below, the latest Markit purchasing managers’ indexes show factory activity continued to decline during July in Japan, South Korea and Taiwan.

Hong Kong:  The commander of the Chinese military garrison in Hong Kong has warned that the city’s increasingly violent political protests are “absolutely impermissible.”  In addition, the People’s Liberation Army released a video showing how the Hong Kong garrison is training to suppress mass protests.  The speech and video are being taken as a warning to Hong Kong’s anti-Chinese protestors that the military is itching to clamp down on them.  As a clamp down starts to look more and more likely, we would expect increasing economic disruption in Hong Kong and further headwinds for Chinese and Hong Kong assets.

Japan-South Korea:  The Japanese government is preparing to take South Korea off its list of export destinations enjoying eased trade rules as early as tomorrow.  The move is in retaliation to South Korea’s continued legal maneuvering to gain compensation for its treatment by Japan before and during World War II.  The move would require Japanese exporters to obtain licenses before they export a wide range of chemicals and electronic goods to South Korea, compared with the controls that have already been imposed on just three chemicals.  No licenses have been granted for exports of those three chemicals, seriously crimping South Korean computer chip manufacturers.

United States-Japan-Brazil:  In spite of the overall global trend toward protectionism and trade disputes, there are some small signs of cooperation, too.  For example, U.S. Trade Representative Lighthizer will meet today with Japanese Economic Revitalization Minister Toshimitsu Motegi to accelerate work on a U.S.-Japan free-trade deal.  Separately, Brazilian Economy Minister Paulo Guedes said yesterday that Brazil and the United States are now officially in negotiations for a deal.

Where’s Boris?  He was in Northern Ireland yesterday.  Just like what we saw in Wales and Scotland, his reception was rather cool.  Northern Ireland hasn’t had a local government because none of the parties can form a government so the area’s affairs are being run from Westminster.  Although Johnson’s coalition is dependent on the DUP for support, Johnson argued he would be an impartial arbitrator in establishing local government.  To a great extent, the Irish border is probably the most contentious issue with Brexit; if Ireland were unified, exiting the EU would be much easier.  The Republic of Ireland is considering plans to establish border controls on its soil to protect the EU’s trading area.

Germany says nein:  The U.S. has asked Germany to participate in protecting Persian Gulf shipping.  Germany has indicated it won’t act unless it is an EU wide effort.  The U.S. isn’t pleased.

This chart shows the annual seasonal pattern for crude oil inventories.  The decline seen over the past few weeks now puts the level below the usual seasonal trough in September.  This decline in stockpiles is supportive for prices. 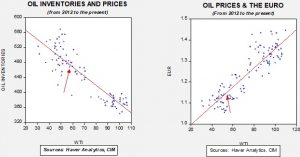 [1] In reality, the Treasury’s mandate on forex is something of a holdover from the days of fixed exchange rates.  In that period, the Treasury, working on behalf of the executive branch, would manage negotiations with other nations on the level of the exchange rate and instruct the Fed to take actions to maintain the peg (in an earlier period, against gold, later against other pegged rates).  Under floating rates, the Treasury has limited tools to intervene to adjust the currency and can “jawbone.” However, monetary policy has a much larger impact.