Our Comment today opens with an update on the Russia-Ukraine war, where the main news focuses on fighting around a major nuclear power plant and Russian preparations to hold a sham referendum on annexing the territories it occupies to Russia.  We next review a wide range of other international and U.S. developments with the potential to affect the financial markets today.

Russia-Ukraine:  Over the weekend, there was little change in the overall disposition and activity of the Russian and Ukrainian forces in theater.  The Russians made only very limited territorial gains in Ukraine’s northeastern Donbas region, while they continued trying to reinforce their positions to defend against a slow-moving Ukrainian counteroffensive designed to retake the city of Kherson, which the Russians have held since early in the war.  Meanwhile, in a development that highlights the broader risks of the war, shelling near the Zaporizhzhia nuclear power plant in eastern Ukraine severed some high-voltage power lines serving the facility, forcing engineers to shut down one of its six reactors over the weekend. 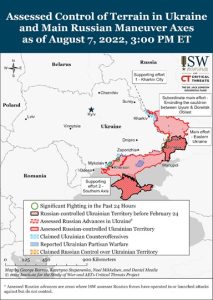 China-Taiwan:  The People’s Liberation Army has continued its aggressive military exercises around Taiwan, despite saying last week that the maneuvers would end on Saturday.  The continued exercises suggest Beijing might intend to keep pressuring Taiwan over time to punish it for House Speaker Pelosi’s visit to the island last week.

China:  In data over the weekend, China’s July trade surplus expanded to a seasonally adjusted $101.26 billion, beating expectations and marking a rise from the surplus of $97.90 billion in June.  The expansion came mostly in exports as trading and logistics firms continued to catch up from the disruptions of China’s mass pandemic shutdowns during the spring.

Israel:  The Israeli government and the Gaza militant group Islamic Jihad agreed to a ceasefire yesterday after three days of fighting that killed more than 40 Palestinians and sent rockets flying deep into Israel’s heartland.  The exchange of fire had been the most intense since an 11-day conflict between the Israelis and the military group last year.

Colombia:  Gustavo Petro, a former leftist guerilla and longtime congressman, was inaugurated as president yesterday.  In his inaugural speech, Petro pledged to lower poverty and hunger in Colombia and secure peace by engaging in talks with several armed groups.  He also laid out a platform to redistribute wealth, modernize the countryside, and adopt environmentally friendly economic policies.

Greece:  Prime Minister Mitsotakis is facing a major political scandal after local media reported that the phone of Nikos Androulakis, a European Parliament member who is the leader of the opposition socialist PASOK party, had been bugged by the Greek intelligence service.  The prime minister’s chief of staff (who is also Mitsotakis’s nephew) and the head of the intelligence service resigned on Friday.

Eurozone Monetary Policy:  According to the Financial Times, the ECB in June and July used €17 billion of maturing bonds in its emergency pandemic relief fund to buy Italian, Spanish, and Greek government obligations, while allowing its portfolio of German, Dutch, and French debt to fall by €18 billion.  The transactions illustrate the ECB’s “anti-fragmentation” effort to keep bond yields from blowing out in the Eurozone’s weaker economies.

U.S. Fiscal Policy:  The Senate yesterday passed President Biden’s “Inflation Reduction Act,” consisting of hundreds of billions of dollars of income tax increases on large, profitable companies to cut the federal budget deficit, partially offset by increased spending on a range of healthcare and climate-stabilization programs.  The bill will now go to the House, where it is likely to be approved on Friday before being sent to President Biden to be signed into law.

U.S. Labor Market:  Despite the strong headline numbers in the July employment report, released last Friday, some major employers are reporting that it’s getting easier to hire and keep workers.  That’s consistent with our view that the July report probably overstated the actual strength of the labor market, in large part because of challenging seasonal adjustment issues.  While it does appear that payrolls increased in July, the true pace is probably moderating.

U.S. Coronavirus Vaccines:  Pfizer (PFE, 49.27) and partner BioNTech (BNTX, 183.11) said they will soon start clinical trials for a COVID-19 vaccine designed to block the BA.4 and BA.5 variants of Omicron.  If the trials are successful and the vaccine is approved, the shot could become available as early as October.