Good morning.  Overall, it’s a rather quiet trading day so far.  U.S. equity futures are edging higher, although recent market action suggests it may not hold.  Our coverage begins with comments from Fed officials who are signaling the end of accommodative monetary policy.  It’s been a year since the fertilizer explosion in Lebanon; conditions have become dreadful.  We start our regular reporting with economics and policy, and China news follows.  International news is next, and we close with our pandemic coverage.

The Fed:  Vice-Chair Clarida spoke yesterday and indicated that the economy was progressing at a pace that would lead to the removal of stimulus by 2023, with announcements to that effect, such as tapering, starting later this year.  The financial markets didn’t like the message; bond yields rose, equities fell, and commodities slumped.  Clarida is important.  Using the Dudley Rule, the three most important messengers from the Fed are the Chair, the Vice-Chair, and the head of the NY FRB.  According to Dudley, these are the opinion leaders, and as long as they stay unified, the level of dissent doesn’t really matter.  Clarida’s positioning appears to us to be out of sync with Powell and Williams, which could mean evidence of policy dissension later this year.  At the same time, Clarida’s term will end in January, and his messaging will likely prompt Biden to pick a dove to replace him.  Earlier this week, the newest governor also pushed for an accelerated timeline, a similar message spouted by his former boss, St. Louis FRB President Bullard.  Fed tightening will come at some point but preventing a repeat of the “taper tantrum” will be very difficult to prevent.

The unending crisis in Lebanon:  It’s been a year since the massive explosion at the Port of Beirut.  The explosion has accelerated the collapse of the state.  Conditions have become abysmal.  Inflation is rampant, reaching nearly 85% last year; the exchange rate has collapsed, with the Lebanese pound losing 95% of its pre-crisis value.  Electricity generation is unreliable and diesel for private generators is becoming scarce.  Water systems are failing.  This podcast offers valuable background on the crisis.  So far, the crisis has been contained in Lebanon.  Israel occasionally has skirmishes with Hezbollah, which dominates the government.  And although conditions in Lebanon are awful, they are worse in Syria, its neighbor.  The longer-running problem is that another failed state in the region will trigger refugee flows, destabilizing neighboring nations and spreading to Europe.

Economics and policy:  The eviction moratorium may not last, and negative nominal interest rate bonds are expanding again. 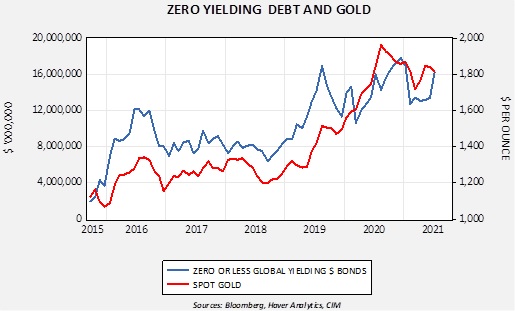 COVID-19:  The number of reported cases is 200,370,643 with 4,259,874 fatalities.  In the U.S., there are 35,334,422 confirmed cases with 614,804 deaths.  For illustration purposes, the FT has created an interactive chart that allows one to compare cases across nations using similar scaling metrics.  The FT has also issued an economic tracker that looks across countries with high-frequency data on various factors.  The CDC reports that 402,010,455 doses of the vaccine have been distributed, with 348,102,478 doses injected.  The number receiving at least one dose is 192,614,017, while the number of second doses, which would grant the highest level of immunity, is 165,334,987.  The FT has a page on global vaccine distribution.

[1] The Odd Lots podcast has held a series of shows on various elements of the logistical snags.