Our Comment today opens with an update on the Russia-Ukraine war, including the latest on Ukraine’s new counteroffensive to push the Russians out of the southern city of Kherson.  We next review a wide range of other international and U.S. developments with the potential to affect the financial markets today, including a potentially dangerous new commitment by Taiwan to defend itself against Chinese military incursions.  We wrap up with a few additional words on the stock market’s reaction to Federal Reserve Chair Powell’s hawkish speech last Friday in Jackson Hole.

Russia-Ukraine:  The Ukrainian counteroffensive to push the Russians out of the southern Ukrainian city of Kherson continues with ground forces pushing against the Russians’ front lines and long-range missiles and artillery attacking their ammunition depots, troop concentrations, and lines of communication far behind the lines.  Meanwhile, the Russians are trying to reinforce their most vulnerable defensive positions by ratcheting down their offensives in the northeastern Donbas region and redeploying their best and most experienced troops southward toward the Kherson battlefield.  We believe it is far too early to gauge the success and likely outcome of the Ukrainians’ counterattack.  Indeed, their methodical approach to the offensive so far suggests it could play out over an extended period.  We may not know the true outcome of the offensive for several weeks.

Russia:  Mikhail Gorbachev, the former leader of the Soviet Union whose efforts to reform the Communist state led to its dissolution, died yesterday in Moscow at the age of 91.  Although Gorbachev was instrumental in ending the Cold War and bringing down the USSR peacefully, he remained vilified by many in Russia because of the economic chaos the breakup caused in the early 1990s.

European Bond Market:  Based on the Bloomberg Pan-European Aggregate Total Return Index, Europe’s market for high-grade government and corporate debt was down 5.3% for the month through yesterday, putting it on track to post its worst month since 1999.  As in the U.S., bonds in Europe have been hammered by rapid consumer price inflation, aggressive interest-rate hikes by central banks, and fears of impending recessions.

China:  At long last, Communist Party leaders have decided their 20th National Congress will begin on October 16.  The meeting will likely be historic, given that President Xi is expected to use it to cement his grip on power by being named to a third consecutive term.

China-Taiwan:  Today, in a development that could dramatically raise the risk of a military clash, Taiwan warned that it will defend itself and strike back as China ramps up its military incursions in the island’s territorial airspace and waters.  Taiwan has also reportedly begun targeting Chinese drones overflying its outlying islands.  The more assertive approach suggests Taipei is trying to balance the risk of sparking outright conflict against its desire to block China from demonstrating effective control over nearby waters and airspace or even Taiwanese territory.

China-Solomon Islands-United States:  After the Solomon Islands recently refused to allow a U.S. Coastguard ship to dock for supplies, President Sogavare said his government will temporarily bar ships from all foreign navies while it reviews its approval processes.  The move deepens concerns that China is now firmly pulling the international policy strings within the Solomon Islands government.  Sogavare struck a secretive new security deal with Beijing earlier this year, presumably in return for Beijing’s support in keeping him in power.

U.S. Monetary Policy:  Yesterday, New York FRB President Williams warned that with the economic momentum still strong and the labor market tight, the Fed will not only need to boost interest rates into restrictive territory, but it will also have to hold them there for some time in order to bring inflation back to the policymakers’ target of 2%.

U.S. Labor Market:  With companies still faced with labor shortages despite the Fed’s effort to slow economic growth, some are trying to lure workers with what could be a relatively low-cost perk.  Some manufacturers, hotels, warehouses, and restaurants are allowing new hires to work just a few days a week, take on four-hour shifts, or even choose new hours daily using phone apps.  In other words, on-site workers are starting to gain the same flexibility enjoyed by remote workers.

U.S. Stock Market:  Finally, now that investors have been able to digest Fed Chair Powell’s hawkish speech at Jackson Hole last Friday, we thought it would be helpful to provide some perspective on where monetary policy and the stock market are probably headed.  The overall picture that we see is that the market had become way too optimistic that the monetary policymakers would stop hiking interest rates and even pivot to rate cuts at the slightest sign of economic weakness.  We suspect there is something of a consensus that the incoming economic data will show significant weakness around the end of the year or in the first quarter of 2023.  Prior to Friday, that weak data would have suggested the hoped-for pivot was at hand.  It would have been a classic case of thinking that “bad news is bullish.”  Now, however, Powell’s commitment to hiking rates further has sunk in, and investors over the last few days have adopted the view that “good news is bearish,” and “bad news is just as bearish.” 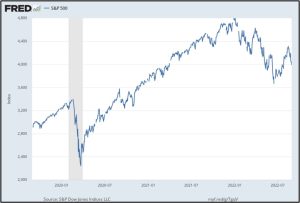