Good morning! Today’s Comment begins with an explanation as to why traders believe that central banks will become more hawkish over the next few months. Next, we review the ramifications of President Biden’s student loan forgiveness program. Lastly, we will give our thoughts as to whether the U.S. should intervene in Ukraine to protect the country’s nuclear power plant and what it could mean for financial markets.

A Hawkish World: Market participants have placed bets that major central banks will raise rates aggressively in their next meetings. 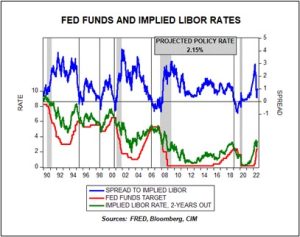 The strong dollar poses a significant threat to international equities, particularly as oil and gas prices remain elevated. Because Fed tightening has contributed to the dollar surge throughout the year, a reversal could provide a tailwind for struggling economies. That said, Fed officials have made it clear over the last few weeks that it would like inflation to drop before it decides to reverse course. As a result, we maintain our position that the current investing environment does not favor international equities.

Student Loan Debt Relief: President Biden announced student loan forgiveness of up to $10,000 for students making under $125,000 a year. 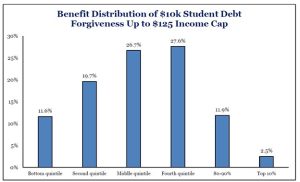 The recent decision by the President to forgive student loans will have political ramifications. Essentially, Biden has decided to show favoritism to a critical voting bloc. Although this is not unusual for a president, especially when elections are near, it does raise the likelihood of a potential voter backlash during mid-term elections in November. Generally speaking, a deadlocked Congress is favorable to equities because it means that laws will be unlikely to change significantly. Hence, a Republican takeover of either or both houses in Congress should be viewed favorably by markets.

Russia-Ukraine Update: Russia has raised the stakes of its invasion of Ukraine with its seizure of the Zaporizhzhia nuclear plant.

A nuclear disaster at the power plant could disrupt the global supply chains, hinder food production, and make energy problems much worse. Although it is unlikely that the U.S. would send military to help secure the area, President Biden will likely be forced to step in if the situation deteriorates into a global crisis. A potential nuclear disaster could have a seismic impact on financial equities. We will continue to monitor this situation closely.