We open today’s Comment with the latest on Afghanistan, where President Biden has rejected calls to extend the U.S. evacuation effort beyond his August 31 deadline.  We then review a range of U.S. domestic developments, followed by some key foreign news.  We close with the latest on the coronavirus pandemic.

Afghanistan:  In yesterday’s G7 virtual meeting, President Biden apparently pushed back hard against allies who argued to keep U.S. military forces in Afghanistan past his August 31 deadline, contending that the risk of attack on troops and evacuees would be too great.  Meanwhile, Taliban officials said they would stop Afghans from trying to enter the airport, purportedly to prevent continued chaos around the facility.  They said they would continue to allow foreigners with valid travel documents in, and U.S. officials said they were working with the Taliban to allow Afghans with valid travel documents to reach the airport. 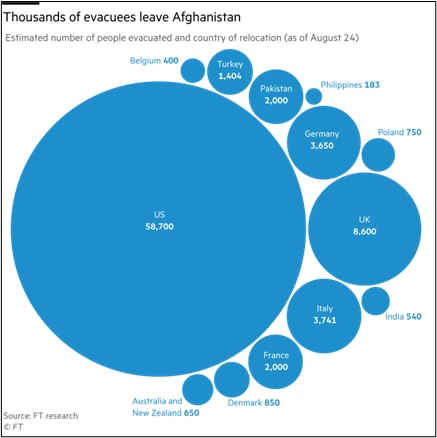 U.S. Fiscal Policy:  The House yesterday narrowly passed a measure greenlighting the main contours of next year’s federal budget, including the Democrats’ $3.5 trillion antipoverty and climate proposals, and locking in a deadline of September 27 to vote on the $1.0 trillion “hard” infrastructure bill.  The measure represents a compromise between Democratic progressives, who wanted to approve both proposals simultaneously, and Democratic moderates, who wanted to pass the infrastructure bill first.  In reality, the approved measure will put pressure on House progressives to pass their detailed antipoverty and climate plan as quickly as possible in order to keep the moderates from abandoning it.  Nevertheless, some versions of the Democrats’ proposals are likely to be passed into law, but what gets passed may end up being significantly watered down from the current proposals.

U.S. National Security:  On her swing through Asia yesterday, Vice President Harris’s departure from Singapore to Vietnam was delayed for several hours in connection with an “anomalous health incident,” according to the State Department.  The government has used that term to describe the “Havana Syndrome” that appears to result from unknown attack vectors against U.S. diplomats.  The announcement immediately raised concerns that Harris herself may have been targeted, although the State Department later insisted she was fine.  In any case, if foreign interests targeted the vice president’s delegation, it would be a major escalation of the attacks and put greater pressure on the federal government to get to the bottom of the problem.

U.S. Cybersecurity:  President Biden today will host a summit of top U.S. business leaders to discuss ways to enhance cybersecurity.  Following the afternoon meeting, the companies are expected to announce a number of “concrete steps” and commitments to help fight cybercrime.

China:  Shares of Chinese internet retailer Pinduoduo (PDD, $99.12) jumped more than one-fifth after it said yesterday that it would donate $1.5 billion in future earnings to charity.  Commentators on Beijing’s new “common prosperity” policy have focused on its effort to rein in large, fast-growing companies that could become rival power centers and its more recent income redistribution slant.  Now, a third major plank of the program involves the government “encouraging” rich companies and individuals to “contribute” more to charity.  Given the way investors reacted to the Pinduoduo news, it appears they’re wagering that big charitable donations will help keep firms in Beijing’s good graces.

Japan:  With Prime Minister Suga’s popularity plunging ahead of this autumn’s elections, Former Foreign Minister Fumio Kishida said he would run to replace Suga as the Liberal Democratic Party’s leader in September’s party elections.  Kishida will be at least the second LDP official who has announced an effort to depose Suga.

European Union-Russia:  In a sign of how Russia might use its energy exports for political purposes after the imminent completion of the Nord Stream 2 natural gas pipeline from Russia to Germany, Moscow is refusing to significantly boost its current gas exports through Ukraine, despite the fact that Europe’s gas supplies are at their lowest levels in years and prices are surging to record levels.  The refusal to boost flows through Ukraine deprives that pro-Western country of vast amounts of transit fees.