Our Comment today opens with an update on the Russia-Ukraine war, where military operations remain relatively quiet.  We next review a wide range of other international and U.S. developments with the potential to affect the financial markets today, including more evidence of financial volatility and economic weakness in Europe.

Russia-Ukraine:  Russian forces continue to make only the most limited of territorial gains in Ukraine’s eastern Donbas region, and some observers suggest those gains have only been possible because the Ukrainians are thinning out their lines in the region in order to move more troops to the Kherson area.  The Ukrainians continue to suggest they will launch a counteroffensive to retake the city of Kherson and surrounding areas from their Russian occupiers, and in recent weeks they have taken some steps toward preparing for that counteroffensive.  Lately, however, we have seen very little sign of the counteroffensive ramping up in earnest, suggesting the Ukrainians may have changed their plans.

Global Energy Markets:  Saudi Arabia Energy Minister Prince Abdulaziz bin Salman has warned that OPEC and its Russia-led allies may cut their crude oil production because of the recent volatility in futures markets.  In response, global oil prices have jumped almost 1.4% so far this morning, with Brent now trading at $97.82 per barrel.

Eurozone Financial Markets:  While the major central banks’ monetary tightening has affected financial markets all over the world, there is increasing evidence that the ECB’s reduced bond buying has stoked volatility in the Eurozone’s bond market.  For example, German government bond yields have recently been more volatile than at any other time in the last decade, and spreads between German and Italian yields are reaching concerning levels again.  Fears of a looming recession and Europe’s usual summer trading lull have also sapped liquidity.

Eurozone Economy:  As shown in the Foreign Releases section in the pdf, S&P Global’s flash composite purchasing managers’ index for August fell to 49.2, as compared with 49.9 in July.  As with most major PMIs, the index is designed so that readings below 50 signal contracting economic activity.  Now that the index has been below that mark for two straight months, it’s becoming clearer that the European economy is indeed slowing and could be on the verge of the recession many analysts are already expecting. 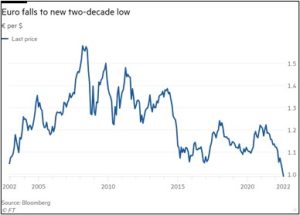 U.S. Labor Market:  Teachers at the Columbus School District, the largest in Ohio, have voted to strike over a wide range of issues including classroom sizes, teacher pay, caps on the number of class periods in the day, and heating and air conditioning availability in school buildings.  As we’ve noted before, falling labor force participation and fast economic growth have tightened labor markets in many countries, giving workers the leverage to demand better pay and working conditions.  If the wave of strikes drives up labor costs enough, it would help keep inflation high and erode corporate profit margins.

U.S. Apartment Market:  New details show that some 420,000 apartment units are due to be completed in the U.S. this year, marking the highest rate of completions in 50 years.  Initially, many of those new units will likely be snapped up by people shut out of the single-family home market by soaring prices and high interest rates.  Eventually, however, the new units could help bring down rents and inflation rates.

U.S. Military:  As we’ve mentioned previously, U.S. military forces have been facing huge challenges in recruiting new members, with the Army likely to end up with far fewer troops than planned in the next year or two.  Now, it turns out that applications to West Point and the other highly selective, prestigious service academies are down 10% to 30% from last year.  The shortfalls reflect problems ranging from the strong labor market, declining interest in the military after the long U.S. wars in Iraq and Afghanistan, and restrictions on in-person recruiting during much of the pandemic.