Good morning on the 30-year anniversary of the Soviet coup.  Risk markets continue to slump this morning.  Equities and commodities are lower, and Treasuries prices are higher.  The combination of tighter policy signaling and rising pandemic concerns are weighing on risk markets.  Our coverage begins with the Fed minutes; reducing QE appears to be coming.  There is an update on the situation in Afghanistan.  A brief comment on La Niña follows.  Next, we cover economics and policy, China news, and our international roundup.  We close with pandemic news.

Fed minutes:  It appears the FOMC will begin slowing its asset purchase program by early next year.  That doesn’t mean that rate hikes will follow, but it is reasonable to expect that rate hikes will be the next step toward policy normalization.  Equity markets didn’t take the news well; we saw over a 1% decline in the S&P 500 yesterday.

Asset purchases remain controversial.  We still don’t know for sure how they work.  The argument for using them was that it lowers long-term interest rates.  However, that effect is ambiguous. 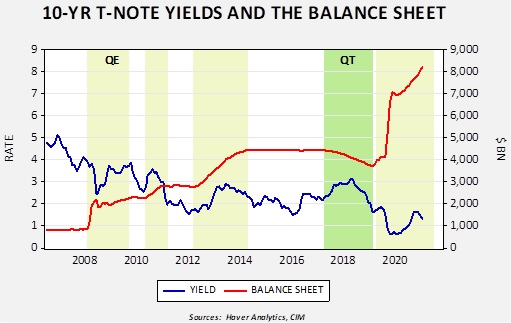 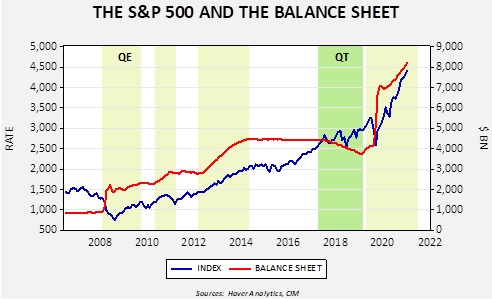 This behavior has raised the idea that the apparent positive correlation is spurious.  We are not sure that’s the case.  The rise in equities in 2016, despite a flat then declining balance sheet, may have been due to the anticipation of corporate tax cuts.  However, since March 2020, the relationship between the balance sheet and the index is pretty clear.  So, concerns about slowing the expansion of the balance sheet are causing obvious concern about future equity values.

Is the Fed making a mistake by reducing accommodation?  We suspect the answer depends on what constitutes a mistake.  If tapering raises unemployment, then it’s probably a mistake.  It could reduce asset values.  Some members of the FOMC don’t think this is a problem.  Several have consistently expressed concerns, especially about housing prices.  Reducing the expansion of the balance sheet is potentially a negative factor for equities; thus, yesterday’s reaction bears watching.

On a couple of related notes, the market isn’t projecting anything of substance from the annual Jackson Hole meeting.  Although we agree with this sentiment, it creates conditions for a surprise.  The Roosevelt Institute, a left-leaning think tank, has issued a very favorable paper on Chair Powell’s policies.  There have been rumblings from left-wing populists in Congress opposing Powell, but this paper may quell some of these concerns.

Afghanistan:  Here is what we are following:

La Niña:  NOAA is projecting that La Niña conditions could develop soon and likely last into winter, although it will likely be a weak event.  La Niña events can have an adverse effect on crop yields and could lead to higher grain prices.  As if the area needed it, La Niña events can lead to dry winters for the Southwest.  The Northwest, on the other hand, may receive much-needed rain.  The upper Midwest tends to be colder and snowier than normal.

Economics and policy:  Firms continue to order aggressively to secure supplies, and the government crackdown on crypto expands. 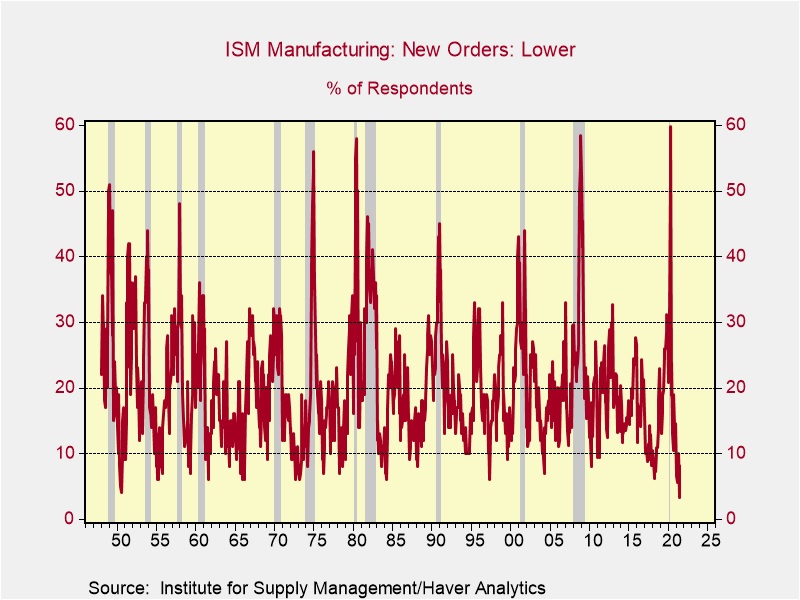 Meanwhile, 56.3% of purchasing managers see their customer inventories as “too low,” also the highest in history.  This combination of characteristics could lead firms to aggressively overorder for fears of supply shortages.  At some point, we could see a major inventory imbalance.

International roundup:  The German conservatives are in trouble, and Lithuania is securing its border.

COVID-19:  The number of reported cases is 209,489,010, with 4,396,744 fatalities.  In the U.S., there are 37,158,863 confirmed cases with 624,260 deaths.  For illustration purposes, the FT has created an interactive chart that allows one to compare cases across nations using similar scaling metrics.  The FT has also issued an economic tracker that looks across countries with high-frequency data on various factors.  The CDC reports that 419,612,925 doses of the vaccine have been distributed, with 358,599,835 doses injected.  The number receiving at least one dose is 199,325,940, while the number receiving second doses, which would grant the highest level of immunity, is 169,186,268.  The FT has a page on global vaccine distribution.  Here is the latest Axios state infection map.