Today’s Comment is split into two sections. In the first half, we explain why speculation about a Fed pivot is premature. We briefly summarize the meeting minutes, show the market’s reaction, and discuss how the strong jobs market will affect the central bank’s decision to raise rates. In the second half, we review reports indicating that regional bloc formation can change over time. We discuss India’s military exercises with U.S. rivals China and Russia, Beijing’s reaction to the U.S. trade negotiations with Taiwan, and Turkey’s growing disenchantment with the West. After each section, we provide a synopsis of the stories covered and their possible ramifications. 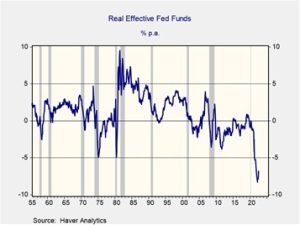 The period of ultra-low inflation has likely passed, but it was good while it lasted. Although the Federal Reserve remains optimistic that slower economic growth will eventually resolve supply chain issues, we are not. Ongoing geopolitical tensions in Europe and Asia will make firms rethink their supply chains. Relatively safe countries that are friendly to the U.S. will be attractive destinations for firms looking to move their operations. That said, in the short run, labor will be able to extract higher wages from their employers, especially as the U.S. unemployment rate remains low. As a result, we believe investors should position themselves to adjust to a higher interest rate and inflation environment.

Geopolitical Tensions: Regional blocs are forming in ways that are hard to predict in the long run.

The reshuffling of allies is not unusual during times of war. During World War II, Italy notoriously declared war on its former Axis partner Germany. Therefore, as regional blocs start to form, we do expect that certain countries could decide to switch sides or choose to fly solo. Over the last few weeks, we have been paying close attention to the European Union. Although it has historical and economic ties with the U.S., its reliance on Russian energy and its exposure to China shows its interests are not fully aligned with its American counterparts. We are not predicting a break of ties but rather that the two regions may push for separate aims. If we are correct, the lack of foreign policy cohesion between the U.S. and Europe could severely complicate firms’ ability to operate in different countries.