Today’s Comment begins with news showing China’s crackdown on big, fast-growing tech companies is perhaps even worse than we’ve been describing.  On top of that, President Xi has signaled a broader prioritization of income redistribution that could also be a significant threat to Chinese companies.  We next review a range of U.S. and international news, including the latest on Afghanistan.  We wrap up with the latest developments related to the coronavirus pandemic.

China:  We’ve written a lot about Beijing’s regulatory clampdown on big, fast-growing technology firms, but new reports show the government is going even further to make sure those companies act in accordance with the Chinese Communist Party’s goals.  According to corporate filings and people familiar with the matter, the government is taking a more direct hand in managing its internet-content companies by acquiring stakes, filling board seats, and sending dedicated regulators to police content at firms more frequently.

Afghanistan:  To keep hundreds of millions of dollars from the Taliban, the administration last week canceled bulk shipments of dollars to Afghanistan and imposed a block on Taliban access to government accounts managed by the Federal Reserve and other U.S. banks.

Japan-Taiwan-China:  Reflecting Japanese leaders’ increasing realization that a Chinese takeover of Taiwan would threaten Japan’s security, the Liberal Democratic Party is planning to launch online talks on security issues with Taiwan’s ruling Democratic Progressive Party as early as this month.  The moves follow a decision by the LDP in February to establish a project team under its Foreign Affairs Division to discuss Japan-Taiwan relations.

Peru:  The country’s new president, former schoolteacher Pedro Castillo, has had significant problems getting his cabinet in place.  Yesterday, his foreign minister, Héctor Béjar, resigned amid an uproar over his accusations that the Maoist Shining Path rebels who terrorized Peru during the 1970s and 1980s were actually linked to the country’s navy and the CIA.  Castillo has also generated controversy over his appointment of a hardline leftist, Guido Bellido, as his prime minister.  The moves have been weighing heavily on Peruvian currency.

Global Commodity Markets:  After enduring the worst drought in nearly a century followed by a bout of cold temperatures, areas within Brazil’s farming belt are braced for further adversity as the La Niña weather phenomenon threatens to bring more dry conditions later this year.  If conditions worsen as expected, prices for key Brazilian exports such as coffee and sugar would likely rise further than they already have. 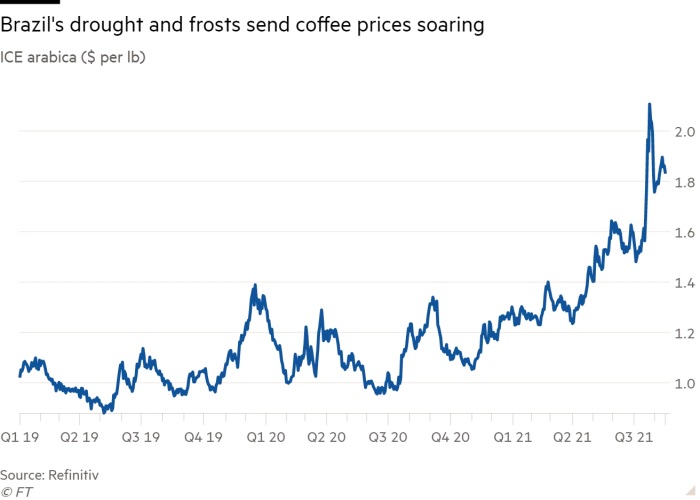