Our Comment today opens with an update on the Russia-Ukraine war, where the Russians continue to face troop constraints and the Ukrainians continue to find success in attacking Russian troop concentrations and logistical nodes.  We next review a wide range of other international and U.S. developments with the potential to affect the financial markets today.

Russia-Ukraine:  Russian forces continue to make small, incremental territorial gains in the eastern Donbas region of Ukraine, but we are seeing more reports of conscripts from one ethnic Russian part of the region refusing to fight other ethnic Russian parts.  The reports are consistent with other signs that Moscow’s troop depletion and reliance on a hodgepodge of volunteers and other less-qualified troops have left it with a relatively ineffective fighting force.  Adding to morale problems, there are also reports that Moscow is failing to pay some Russian reservists and volunteers fighting in Ukraine.  Meanwhile, Ukrainian officials urged civilians around the Russian-occupied southern city of Kherson to evacuate so Kyiv’s forces could continue ramping up their counteroffensive to retake the area.

European Energy Market:  As the EU looks for ways to cut its reliance on Russian energy, bloc officials are reportedly considering the possibility of lowering regulatory barriers to the mining and production of critical green energy materials such as lithium, cobalt, and graphite.  While it appears that any such deregulation of mining is still off in the future, even the consideration of such an idea seems to illustrate just how desperate EU leaders are to shore up their energy security.

Germany:  The ZEW Institute’s closely watched index of investor expectations fell to an 11-year low of -55.3, down from -53.8 last month.  Against the backdrop of the Ukraine war, surging energy costs, and rising inflation, the figures suggest investors are now more pessimistic about the German economy than they have been at any time since the Eurozone debt crisis more than a decade ago.

United Kingdom:  The Office of National Statistics reported that second quarter real wages fell by a seasonally adjusted 3.0%, marking their steepest decline in at least two decades.  According to the report, nominal pay rose 4.7% in the quarter, but that rise was more than wiped out by increased consumer prices.  As energy and other prices rise faster than wage gains, similar declines in real wages are being reported in countries across the globe.

China:  Property developers’ stocks have risen sharply today on rumors that the government will instruct state-owned institutions to guarantee their domestic bonds.  If true, the new government support would likely be targeted toward helping the developers complete homes that have already been paid for but not yet finished or delivered.  That could help stabilize China’s housing market and weaken one of the headwinds facing the Chinese economy, but the country and its financial markets would still face a range of challenges, such as unpredictable, draconian pandemic lockdowns, a regulatory crackdown on its technology industry, and fracturing trade and investment ties with the West.

Australia:  In what could be a major new scandal, Former Prime Minister Scott Morrison has been accused of secretly appointing himself as head of five separate ministries during the coronavirus pandemic.  Morrison has tried to defend himself by arguing that the moves were necessary to cut the risk of ministers contracting COVID-19 during the pandemic, but he is being widely pilloried for undermining democracy and government accountability, even by members of his own opposition Liberal Party.

Kenya:  Deputy President William Ruto has been declared the winner of last week’s presidential election with 50.5% of the vote, but his main rival’s supporters and some election commissioners are disputing the result.  The risk is that Kenya could be thrown into yet another round of political unrest and violence, adding to the overall instability sparked by rising commodity prices and high interest rates in many emerging markets.

U.S. Bond Market:  New analysis shows that just 6.2% of U.S. junk bonds are now trading at distressed levels, down from 11.6% as recently as early July.  The new study, which defines “distressed” bonds as those trading at a yield greater than 10.0% above comparable U.S. Treasury obligations, illustrates just how dramatically investors have jumped back into the junk bond market as they’ve come to expect the Fed will pivot to interest rate cuts as early as 2023. 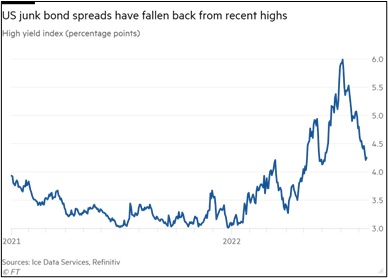 U.S. Technology Trade:  In a potential scandal in the U.S., a new analysis shows that a Commerce Department-led process meant to review sensitive technology exports to China approves almost all requests and hasn’t stopped an increase in the sales of some particularly important technologies.  As a result, the U.S. continues to send to China an array of semiconductors, aerospace components, artificial-intelligence technology, and other items that could be used to advance Beijing’s military development.

U.S. Agriculture Market:  Faced with a withering drought, cotton growers in the Southwest are abandoning up to 40% of the acres that they planted in spring, prompting forecasts for the weakest U.S. harvest in more than a decade and sending prices sharply higher.  Cotton futures prices rose some 13% in the last week, ending Monday at approximately $1.136 per pound.