Good morning.  Risk markets are weaker this morning.  Fears of slowing global economic growth, the persistence of the pandemic, and the unsettling images from Kabul are weighing on sentiment.  Our coverage begins with the events in Afghanistan.  Up next is economics and policy, followed by China news and our international roundup.  We close with pandemic news.

Afghanistan:  We continue to monitor events in the country.  Over the weekend, the government of Ashraf Ghani has collapsed as he has fled the country.  Over the past month, the Taliban has captured key cities amid almost non-existent resistance in most areas.  By taking Kabul, the Taliban has effective control of the country.  The U.S. era in Afghanistan has come to a rapid and chaotic end.  The last land route out of Afghanistan has been taken by the Taliban, leaving air evacuation from Kabul airport as the only remaining exit.  The airport has reportedly come under fire, so leaving the country may not be possible at some point.  Scenes at the airport, similar to the iconic ones observed in 1975 Saigon, will become a lasting memory.  Crowds have packed the airport, hoping for a flight out.  Western nations are scrambling to pull embassy personnel out of the country.  U.S. embassy officials were ordered to destroy sensitive materials, and most personnel are being evacuated.  It appears that U.S. forces control the Kabul airport, but it is unclear how long that will last.  The State Department has told remaining employees to stay at the embassy.  Helicopters have been ferrying workers out, as it has become too dangerous to escape by car.  European embassies will remain in Kabul to process visas for local employees who would be in great danger from the Taliban government.  Germany is sending its military to evacuate its embassy.

Unfortunately for the Taliban, taking territory is one thing, but governing is another.  Afghanistan is divided along tribal and ethnic lines, and once outside powers are ousted, the country will likely spiral into civil conflict.   When the Taliban was in control before 2001, it was a brutal regime; although we expect a return to such governance, it is possible the group may govern with a lighter hand this time around.  The old leadership is mostly gone, and the lesson from before is that harsh conditions trigger opposition.

Although it’s still a bit early to tell, our read is that the chaotic end to the U.S.-sponsored government in Afghanistan will have serious political ramifications.  The administration was caught flat-footed by the speed of the Taliban offensive.  SoS Blinken was on the Sunday news shows arguing that what was happening in Afghanistan “was not Saigon.”  It’s arguably worse.  What is going on in Kabul is being described as “Saigon on steroids.”  The U.S. had effectively withdrawn in 1973, and the government of South Vietnam held power until 1975.  Establishment figures are calling the decision to leave Afghanistan and the collapse of the government an intelligence and planning failure.   What went wrong?  The president appears to have made up his mind early on to exit Afghanistan.  As a policy, this is defensible.  Although it has been argued that a failed state in Afghanistan could be a breeding ground for international terrorism as it was with al Qaeda, there are many failed states in the world and the U.S. can’t occupy all of them.  Afghanistan, by itself, is not central to U.S. foreign policy interests.  However, what happened over the past two weeks shows a clear lack of preparation.  According to reports, the president didn’t take the advice of military leaders.  Again, this isn’t a shock; the military rarely wants to abandon missions.  Leaving like this isn’t in anyone’s playbook and suggests a lack of planning.  After all, the administration knew we were leaving.  The lack of preparation will have political costs.  It can be argued that the Trump administration left Afghanistan as unfinished business, and “leftover” issues are always part of transitions.  In any case, once you are sworn in, they become your problems.

Whenever an event like this occurs, questions are raised about America’s reliability as an ally.  The human tragedy of Afghans who supported the war effort and are left behind reflects badly on the U.S.  History shows that if an area of the world is considered a vital interest, the U.S. has remarkable staying power.  The security support for Europe and Japan can attest to this.  However, areas that are not vital can be abandoned rather quickly.

All presidencies face unexpected crises.  The George W. Bush administration wanted a “humble” foreign policy…until 9/11.  President Obama took power into the teeth of a deep recession and a financial crisis.  The pandemic clearly affected the Trump administration.  The Biden government has been aggressively pushing for major fiscal policy actions; Afghanistan will almost certainly become a serious distraction and could potentially derail the process.  To allow such chaos raises concerns about competence.

Economics and policy:  The FOMC is leaning toward policy tightening, and the House is starting to prepare for the budget and infrastructure bills. 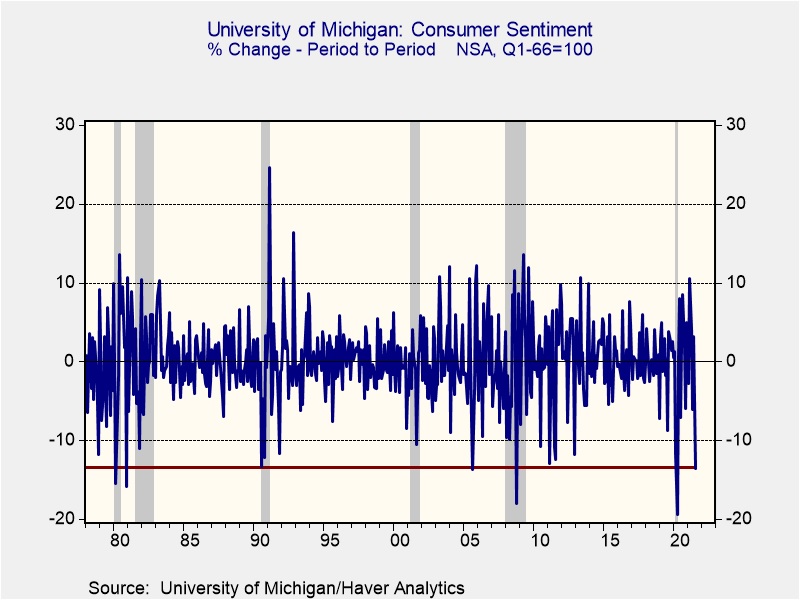 This chart shows the monthly percent change in the index; declines seen in August (the data is preliminary and will be finalized at the end of the month) are unusual, and more often than not, are tied to recessions.  What is depressing consumers?  It’s probably a lot of things, such as rising inflation, the lingering pandemic, political strife, etc.  This data suggests the FOMC should exercise caution.  We don’t have much experience with pandemic recoveries, and the Fed could get “wrong-footed” here.

China:  The Chinese economy is slowing, and there is growing evidence of Xi’s concentration of power.

International roundup:  Haiti, Beirut, and Canada are in the news.

COVID-19:  The number of reported cases is 207,278,035, with 4,364,473 fatalities.  In the U.S., there are 36,680,793 confirmed cases with 621,636 deaths.  For illustration purposes, the FT has created an interactive chart that allows one to compare cases across nations using similar scaling metrics.  The FT has also issued an economic tracker that looks across countries with high-frequency data on various factors.  The CDC reports that 415,957,645 doses of the vaccine have been distributed with 356,433,665 doses injected.  The number receiving at least one dose is 198,088,722, while the number receiving second doses, which would grant the highest level of immunity, is 168,362,058.  The FT has a page on global vaccine distribution.