Our Comment today opens with an update on the Russia-Ukraine war, where the disposition of forces has changed relatively little in recent days.  We next review a wide range of other international and U.S. developments with the potential to affect the financial markets today, most notably a bevy of disappointing economic news from China and a surprise interest-rate cut from the country’s central bank.

Russia-Ukraine:  Russian invasion forces continue to make only incremental territory gains in Ukraine’s eastern Donbas region, while reinforcing their troops occupying the southern region around Kherson.  The latest reports highlight that those reinforcement efforts have left the Russians with a hodgepodge of forces from different military districts and of different capabilities, which would likely make them hard to manage and relatively ineffective. 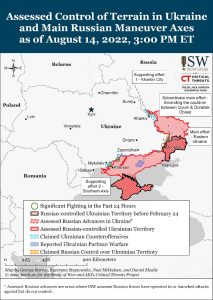 China:  After a wide range of data today showed China’s post-pandemic economic recovery stumbled in July, the People’s Bank of China announced a surprise interest-rate cut.  However, the cut in the medium-term interest rate was just 0.1%, to 2.75%, perhaps signaling the central bank’s reluctance to ease policy more aggressively after it recently warned about inflation pressures.

China-Taiwan-United States:  Following House Speaker Pelosi’s controversial visit to Taiwan earlier this month, a bipartisan group of Congressmen landed on the island yesterday, prompting another round of protests and threatening military exercises by Beijing.  Like Pelosi, the legislators said they were visiting Taiwan to express support for its democracy and to demonstrate their right to visit the island.

United States-Iran:  U.S. Secretary of State Blinken has explicitly linked Iran to the attempted murder last week of irreverent novelist Salman Rushdie.  Specifically, Blinken called out Iranian institutions for inciting violence against Rushdie for generations and then gloating over the news of his stabbing last week.  The statement illustrates how the stabbing has become yet another source of tension between the U.S. and Iran.

European Drought:  As Europe’s historic drought worsens, the depth of the Rhine River between Wiesbaden and Koblenz fell to just 40 cm on Friday.  At that depth, most barges can only carry a fraction of their capacity, meaning companies needing to send coal, chemicals, or components upstream from Rotterdam and Antwerp will have to use much more expensive truck and rail systems.

United Kingdom-Leadership Race:  In the race to succeed Boris Johnson as Conservative Party leader and prime minister, polling over the weekend showed Foreign Minister Liz Truss’s lead over Former Chancellor Rishi Sunak has narrowed to 22%.  However, other reports say as many as 8 in 10 party members have already sent in their ballots, which likely works in Truss’s favor because her lead hadn’t begun to narrow until recently.

United Kingdom-COVID:  The Medicines and Healthcare Products Regulatory Authority has approved a COVID-19 vaccine from Moderna (MRNA, $171.18) that is specifically targeted to the highly transmissible Omicron variant.  The move makes the U.K. the first country in the world to approve an Omicron-specific vaccine and likely sets up an autumn vaccination drive for it.

U.S. Fiscal Policy:  On Friday, the House passed President Biden’s “Inflation Reduction Act,” which includes higher taxes on corporations and increased funding for the IRS to raise funds for deficit reduction, as well as providing new funding for healthcare, climate-stabilization, and sustainable agriculture policies.  As we’ve noted previously, passage of the bill may marginally improve the Democrats’ prospects in the mid-term elections in November, but we still expect the Republicans to take control of at least the House.