In today’s Comment, we open with an update on U.S. policy news, including expectations that the Senate will pass the $1 trillion “hard” infrastructure bill this morning, even as Democrats released details on their proposed follow-on bill covering antipoverty and climate proposals.  We also discuss developments in the U.S. labor and cellphone markets.  We next turn to major foreign news items and end with the latest news related to the coronavirus pandemic.

U.S. Fiscal Policy: Senate Democrats released an outline of their $3.5 trillion antipoverty and climate plan encompassing a range of programs such as universal prekindergarten and expanded Medicare.  Democrats will focus on passing it as early as Tuesday, right after the Senate is expected to pass the $1 trillion “hard” infrastructure plan covering items like roads, bridges, airports, and broadband systems.

U.S. Monetary Policy: Even though President Biden’s economic team generally supports renominating Federal Reserve Chair Powell to a second four-year term when his current term runs out in February, prominent progressives in the Democratic Party are increasingly agitating for someone who they think would be more closely aligned with their priorities.  Despite Powell’s forceful response to the coronavirus pandemic and his effort to push monetary policy more strongly in the direction of supporting full employment, especially for minorities, progressives are looking for a Democrat who would be more open to tighter regulation of the financial industry and perhaps even looser monetary policy.

U.S. Labor Market: In the monthly JOLTS report yesterday, June unfilled job openings rose to a seasonally adjusted 10.1 million, reaching the highest level since record-keeping began in 2000.  The increase was driven largely by professional and business services, retail, and accommodation and food services as the month of June saw continued easing pandemic restrictions and thus more consumers dining out and traveling.  Importantly, the number of open jobs now exceeds the number of people counted as unemployed.  That signals a tight labor market, although it’s important to remember that this data would not yet reflect much impact from the rapidly spreading delta mutation of the coronavirus.  The chart below shows the ratio of unemployed workers to job openings. 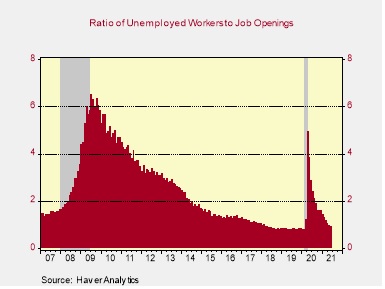 U.S. Cellphone Market: Even as U.S. cellphone service providers reported adding some eight million new subscribers over the last year, a firm that tracks the industry said U.S. population and market trends could only explain four to six million of the new subscribers.

China: Japan’s mammoth Softbank (SFTBY, 30.74) said it will cut its investment in Chinese start-ups until the extent of Beijing’s scrutiny of the tech sector becomes clear.  Founder Masayoshi Son said the investment conglomerate will take a “wait-and-see stance” until the situation settles in what he hopes would be a year or two.

China-Cambodia: A report from Human Rights Watch has branded a Chinese-financed dam in Cambodia as a “disaster” for indigenous and ethnic minority communities.  The report claims that the Lower Sesan 2 dam, part of China’s signature Belt and Road Initiative, has “washed away the livelihoods” of communities that relied on fishing, forest-gathering, and farming when the areas upstream were flooded.  The report adds to multiple other reports accusing the program of damaging poor, developing countries despite China’s effort to use the initiative to expand its global influence.

China-Russia: Russian forces are participating in a regular Chinese military exercise for the first time this week, stoking concerns among Western analysts that the two U.S. adversaries are developing joint operational capabilities.

Russia: Although jailed opposition leader Alexey Navalny has largely dropped out of the headlines recently, the Russian government continues to put pressure on his organization in an apparent effort to rip it out of society “by the roots.”  In the latest move, the government has opened a criminal investigation into two exiled allies of Navalny for raising funds for organizations deemed by the authorities as “extremist.”

Afghanistan: Taliban forces overran a fifth provincial capital in northern Afghanistan yesterday, putting even more pressure on the central government in Kabul.  Taliban fighters now control more than half of the country’s 400 districts and a number of economically important border crossings as government security forces retreated to local cities. 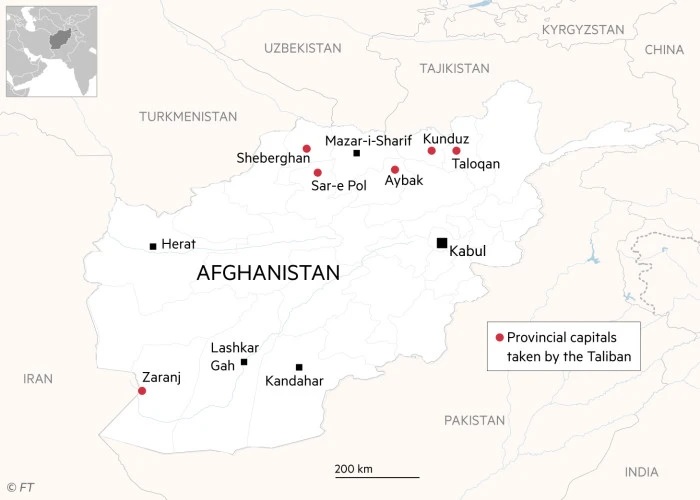 Peru: Worries about the country’s new left-wing government are already weighing on economic activity, but they’re also exacerbating inflation.  Increased political and policy uncertainty have contributed to a 13% decline in the value of the currency since the start of the year, driving up costs for imports and the goods or services that compete with them.