Our Comment today opens with an update on the Russia-Ukraine war, including details on the first shipment of grain from a Ukrainian port under the recent Turkish-brokered deal for safe passage of food exports from the country.  We next review a wide range of other international and U.S. developments with the potential to affect the financial markets today.

Russia-Ukraine: With Ukrainian forces apparently ramping up their counteroffensive against Russian occupiers in the southern Ukrainian city of Kherson, leaders in Moscow continue to face the dilemma of whether to transfer troops from the occupied Donbas region to reinforce the city.  The latest reporting suggests that the Russians may be trying to squirm out of that dilemma by launching new attacks from the Donbas region westward toward the major Ukrainian city of Kharkiv.  That attack has the potential to draw Ukrainian forces northward to help defend it, weakening their attacks on Kherson, but it is not at all clear whether the Russians have enough resources to truly threaten Kharkiv and draw the Ukrainians into that battle. 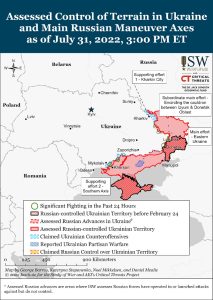 United Kingdom: In the race to succeed Boris Johnson as Conservative Party leader and prime minister, Foreign Minister Liz Truss and Former Chancellor Rishi Sunak continue to hammer each other over tax policy.  In recent days, Truss, who remains the odds-on favorite to win the race, has pilloried Sunak for his effort to control the government budget deficit by hiking taxes.

Chinese Foreign Policy: Many people are now familiar with President Xi’s “Belt and Road Initiative,” which aims to build Chinese influence around the world by providing capital for infrastructure projects, but it’s now becoming clear that Xi intends to supplement this economic program with his newly announced “Global Security Initiative.”  Under the program, Beijing offers military training, intelligence sharing, and joint counterterrorism activities to developing countries, ostensibly to build their own independent defense capabilities and avoid Western sanctions.

Chinese Economy: As shown in the data tables below (see pdf), China’s official purchasing managers’ index for manufacturing fell to a seasonally adjusted 49.0 in July, missing expectations that it would rise to 50.3 from its reading of 50.2 in June.  Like most major PMIs, the Chinese one is designed so that readings below 50.0 point to contracting activity.  Separately, a private housing data provider said that July home sales by the country’s top 100 developers were down 39.7% from the same month one year earlier.

China-United States: Despite China’s effort last week to forestall the U.S. delisting of Chinese firms that don’t meet U.S. auditing disclosure standards, the SEC on Friday said internet giant Alibaba (BABA, $89.37) has been put on a list of firms scheduled to be kicked off U.S. stock exchanges in the coming years.  More than 150 Chinese firms are now on that list, prompting Hong Kong Financial Secretary Paul Chan to warn that the financial center should prepare for a “worst case” scenario in which U.S.-China relations rupture definitively.  The situation underscores the regulatory risk faced by Chinese companies trading on U.S. exchanges.

U.S. Labor Market: Boeing (BA, $159.31) has, at least temporarily, averted a strike which was due to start this afternoon at its defense-related plants in the St. Louis area.  Early this morning, the company offered last-minute contract concessions related to changes it wanted to make to unionized workers’ 401(k) plans.  The new contract will be subject to a union vote on Wednesday.

U.S. Apartment Market: In more positive news for inflation, a private data firm says U.S. apartment rents in the second quarter were up “just” 9.4% year-over-year, cooling from annual increases of more than 11.0% in each of the two previous quarters.  The firm projects that rental rates will continue this trend through the coming months.  Moderating rents will help lower the overall reported inflation rate, although only with a long lag.