Good morning all!  U.S. equity futures are mostly elevated this morning in the wake of yet another record S&P 500 close.  We open commentary this morning with the Fed minutes.  Economics and policy follow with corporate taxes in the spotlight.  Pandemic news is next.  China news follows, and we close with our international news roundup.

Fed minutes:  There were no obvious surprises in the minutes from the March 16/17 meeting.  There were expressions of concern about inflation, but it is also obvious that the FOMC intends to keep rates steady at least into 2023.  Although there are comments circulating that the market is starting to discount rate hikes sooner than the FOMC is suggesting, our Eurodollar model suggests that rates are merely normalizing, but it doesn’t appear to us that the rise in market rates is out of the ordinary. 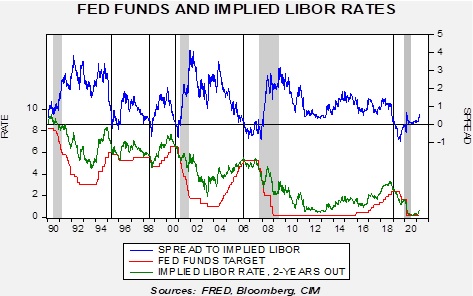 Economics and policy:  Better global growth is coming, and a global corporate tax agreement is being floated.

COVID-19:  The number of reported cases is 133,250,442 with 2,890,706 fatalities.  In the U.S., there are 30,923,521 confirmed cases with 559,117 deaths.  Both cases and fatalities in the U.S. are declining.  For illustration purposes, the FT has created an interactive chart that allows one to compare cases across nations using similar scaling metrics.  The FT has also issued an economic tracker that looks across countries with high-frequency data on various factors.  The CDC reports that 225,294,435 doses of the vaccine have been distributed with 171,476,655 doses injected.  The number receiving at least one dose is 109,995,734, while the number of second doses, which would grant the highest level of immunity, is 64,422,618.  The FT has a page on global vaccine distribution.  The Axios state map shows a mixed picture, with the net result of mostly steady infection rates.

China:  Regional tensions remain elevated, and it appears the U.S. is backing down from a boycott of the Olympics.

[1] The ESG movement would be part of this idea.

[2] This is nothing new, BTW.  The Triffin dilemma, which discussed this problem, emerged in the 1960s.