[Posted: 9:30 AM EDT] Happy Monday!  Although we are in spring, a massive winter storm is moving over the northern plains and will delay planting in the northern Corn Belt.  It will also increase flooding in the major river systems in a couple of weeks.  Here is what we are watching:

Elections this week: Israelis go to the polls tomorrow as PM Netanyahu tries to win another term.  In Israeli politics, no major party ever wins a majority and must form a coalition government with smaller parties.  Although we expect Netanyahu to prevail, he does face a formidable opponent in Benny Gantz, a retired general with extensive national security experience.  It will likely take a few weeks after the election for a government to be formed.  On Thursday, India, the world’s largest democracy, starts the election process that will take several weeks to complete.

Brexit: At least on paper, this is the deadline week for Brexit.  In reality, we expect a delay of at least until the end of June,[1] and perhaps much longer.  PM May and Labour’s Corbyn have been talking off and on but no signs of progress have emerged[2]; the talks themselves have upset party leaders on both sides.[3]  Meanwhile, the EU will also be meeting this week to discuss Brexit.  French President Macron has been taking a hard line against the U.K. but we doubt his position will carry the day.[4]  The “natural” path is to “kick the can down the road” a bit further.

China/U.S. trade: Both sides continue to tout progress but admit that hard decisions remain to be addressed.[5]  We continue to expect an agreement to emerge, perhaps by the end of April.

War in Libya?  American forces operating in Libya have been evacuated[6] as Gen. Khalifa Hifter faces stiff resistance in his march on Tripoli.  Hifter’s forces control the eastern part of Libya and last week moved on the western part of the country.  Although it is difficult to confirm, it appears that Hifter believed he had arrangements with militias[7] in the western regions to support his incursion.  Unfortunately, the militia groups splintered, meaning Hifter’s forces are facing much more resistance than he expected.  The fighting has given oil prices a boost.[8]

OPEC: Russia is indicating it may lift oil output in H2 as oil prices trend higher.[9]  Russian oil companies face a tax regime that essentially has a windfall profit tax.  In other words, the higher the oil price, the more tax liability Russian oil firms face.[10]  Thus, support for higher prices tends to wane among Russian oil firms as prices rise.  Saudi Arabia, on the other hand, continues to press for higher prices.  Also, we reported last week that unnamed Saudi officials were threatening to move away from dollar pricing for oil.[11]  The Saudi oil minister indicated today that such a change isn’t going to occur.[12]  Although we have been supportive of oil prices, at current levels, we would expect to see temptations rise for OPEC cheating.

IRGC a terrorist organization?  According to reports, the U.S. is considering naming the Iranian Republican Guard Corp a foreign terrorist organization (FTO).[13]  If the administration follows through on the threat, it would be the first time a government entity would be given this designation.  The FTO designation would greatly increase the financial sanction tools against Iran.  At the same time, it would invite strong retaliation from Iran.[14]  This designation will increase tensions with Iran and would be supportive for oil prices.

Cain for the FOMC: The establishment backlash against Herman Cain continues, while the administration continues to back his appointment.[15]  The FT is warning that the administration may take an even more aggressive line against the FOMC and directly threaten the Fed’s independence by firing Chair Powell.[16]  On the one hand, we rather doubt that President Trump would take such aggressive action against Powell.  On the other hand, the fact that a well-respected financial paper would even suggest such an attack is possible is remarkable by itself.  As we have noted before, central bank independence is not scriptural.  There is nothing sacred about central bank independence.  In fact, such stature is instrumental; if you want low inflation, an independent central bank is helpful to that effort.  But, if your goal is to reflate then an independent central bank can impede that process.  If the goal is reflation, a less independent FOMC would make sense. 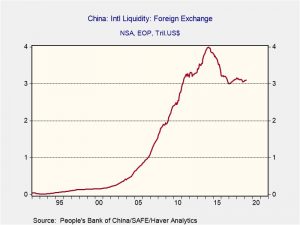 Chart du jour: We have noticed that retail wage growth has been very strong recently. 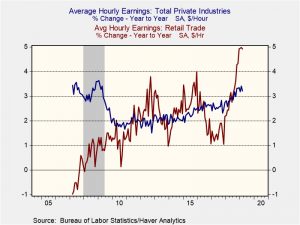 At the end of 2017, wage growth in retail was only about 1.0%.  Since then, it has soared to nearly 5.0% annual growth, far exceeding overall private sector wage growth.  Two factors appear to be driving the rise.  First, state and local government regulations have been boosting minimum wage laws.  This action, coupled with announced pay increases by high-profile firms, is lifting retail wages.  Second, anecdotally, there is evidence to suggest that tightening labor markets are forcing retailers to boost pay.[18]