[Posted: 9:30 AM EDT] The WTO released its global trade data for 2015 yesterday along with its forecasts for this year and next.  The sum of imports and exports rose 2.8% last year and is expected to rise at the same pace this year, rising to 3.6% in 2017.  The WTO noted that the past five years have been the slowest trade expansion in the postwar world.  Although trade volumes rose 2.8%, the value of trade plunged 13% due to the dollar’s strength.  Container shipping volumes were flat last year. 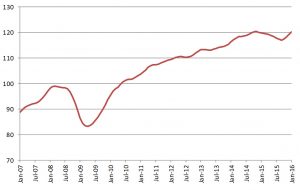 This chart shows container traffic on a volume basis.  This indicator peaked in mid-2014 and recovered to its old highs at the end of last year. 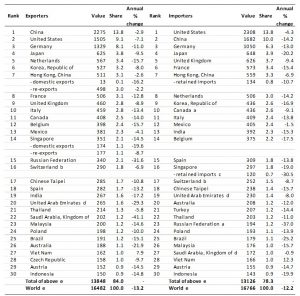 This table shows the world’s largest importers and exporters.  Note the growth declines seen across the board.  On the export side, only Vietnam showed positive growth and none of the 30 largest importers increased last year.  The world’s largest exporter remains China, with a 13.8% share of total exports; its exports fell 2.9% last year.  The U.S. is the second largest (a cautionary note for the political class, which is becoming increasingly protectionist), but U.S. exports fell over 7% last year.  Germany, the world’s third largest exporter, saw the value of its exports decline by 11.0%.  Also note that oil exporters suffered massive declines, with Saudi Arabia falling 41.1% and Russia off 31.6%.  On the import side, the U.S. remains the world’s largest importer, with a 13.8% share; the value of U.S. imports fell 4.3%.

The drop in trade is partially due to the strong dollar but that isn’t the whole story.  We suspect two factors are at work.  First, slow U.S. economic growth is dampening global trade.  Because of America’s reserve currency status, the U.S. is the global importer of last resort.  Deleveraging and weak economic activity is reducing America’s ability to fulfill that role, leading to weaker trade.  Second, without American leadership on trade, the world is slipping into mercantilism and “beggar thy neighbor” trade policies.  This development not only weakens global economic growth, but it makes the world a more dangerous place.  Nations that trade can still go to war with each other (the world was quite integrated before WWI), but trade does make the idea of conflict between trading powers more costly.  Falling trade leads to a scramble to capture aggregate demand from other nations and fosters protectionism.

In that light, the Japanese finance minister warned that the JPY is strengthening too quickly and fear of intervention has eased some of the currency’s strength today.  We are leaning toward the idea that Chairwoman Yellen is using the dollar as a policy indicator, which is really bad news for the ECB and BOJ.  This is a development we will be monitoring in the coming weeks (and which we discussed at length in yesterday’s comment).