[Posted: 9:30 AM EDT] It was another quiet overnight session.  Oil prices jumped on reports from the American Petroleum Institute’s (API) weekly oil storage data, which showed an unexpected draw in stockpiles.  The API data can diverge from the official DOE data, which we receive at 10:30 EDT today.  A draw this time of year is unusual and, if confirmed by the government data, would be bullish for oil.  We are approaching the end of the inventory build season (more on this tomorrow); once seasonal stock draws begin, some of the pressure on oil prices will start to abate.  The other factor that has slipped under the radar screen on oil is that the dollar has weakened considerably in the past few weeks and the relationship of the dollar and oil has been virtually as tight as the one with inventory…so much so that they are statistically collinear.  If the dollar continues to weaken, oil prices (and, high yield bonds) will be a significant beneficiary.

The dollar has weakened because the Federal Reserve has backed away from its tightening path for this year.  Policy divergence has been a key element behind the dollar’s rally; as the Fed was tightening, the ECB and the BOJ have been easing.  Interestingly enough, we really never knew for sure which was more important—the relative hawkishness of the Fed or the dovishness of the ECB and BOJ.  Recent behavior seems to suggest that the most important factor is the Fed.  Today, the minutes of the most recent meeting will be released.  We would generally expect to see a report that is somewhat more hawkish than what the statement and press conference indicated.  This is because there is a constituency on the committee that adheres to the Phillips Curve and thus wants to see tightening accelerate.  Even dovish Boston FRB President Rosengren was quoted earlier this week warning that the markets have become too complacent about policy accommodation.  Thus, we would not be surprised to see a somewhat bearish surprise with the release.

One of the variables we closely monitor is the level of retail money market funds.  In general, rising levels of cash tend to be bearish for equity markets. 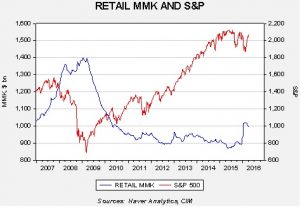 This chart shows the level of retail money market funds along with the S&P 500.  It appears that as investors liquidate equity positions, the funds are held in money markets, at least initially.  Equity market weakness in Q1 is reflected in the jump in money market funds held.  Note that we are starting to see money market fund levels decline and equities recover.  If the preferred level of funds is around $900 bn, there is a chance that equities will surprise to the upside.