Good morning and happy Monday!  The S&P 500 moved above 4,000 last week, and equity futures are moving further higher this morning.  Some of the upward pressure is coming from Friday’s employment data, which we recap in today’s comment.  BTW, the IMF meeting is on the docket this week.  Our coverage begins with Jordan; it appears there was a coup plot underway that was apparently thwarted.  Economics and policy follow, with an update of the pandemic next.  We close an international news roundup.

Jordan:  At least 20 people have been arrested in what appears to be a conspiracy to overthrow the government of King Abdullah II, king of Jordan.  The half-brother of the king and former crown prince, Prince Hamzah bin Hussein, was included in those arrested.  He is reportedly under house arrest.  Their father, the late King Hussein, had four wives and 11 children, meaning that there are numerous family members with royal linage but no path to power.  Prince Hamzah bin Hussein has emerged as a prominent critic of the king, accusing the government of corruption and incompetence.  He has developed a strong online following for his comments.  He has also fostered strong ties to tribal leaders in Jordan who have considerable informal power.  The king has accused the prince of involvement in the coup; the prince is arguing that his arrest is an attempt to silence his criticism.  In addition to the prince, there were several high-ranking, and former high-ranking, officials and members of the royal family arrested.  The government has suggested “foreign involvement” in the plot, although it is unclear who that foreign power is exactly.  Interestingly enough, most of the nations in the region responded with supporting King Abdullah, suggesting the foreign power may be outside the region.

Jordan is a small country with a small economy, but it is a source of stability for the region.  The country has an accord with Israel and has mostly been a neutral party in the region’s numerous conflicts.  It has housed refugees from the Syrian civil war.  Instability in Jordan would unsettle the region, and thus, we would expect a rush of economic support for the king.

Economics and policy:  Housing and the infrastructure bill lead the news. 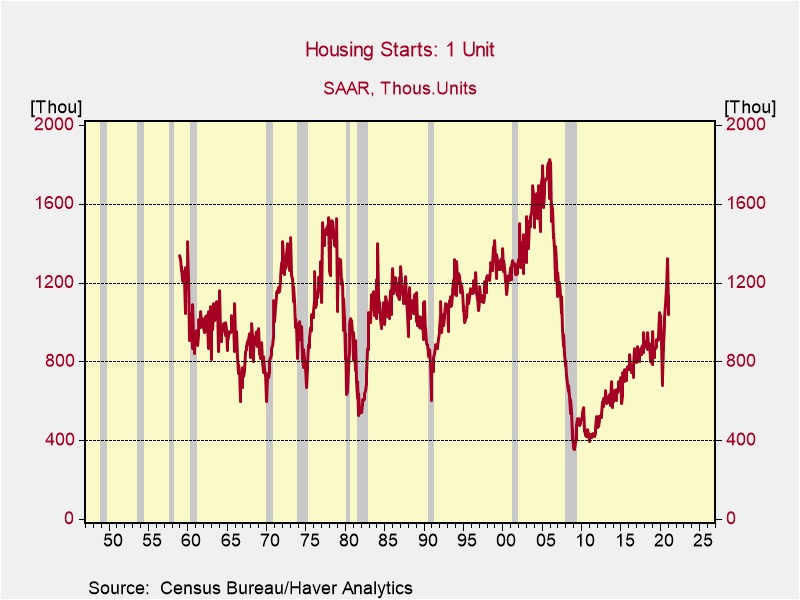 The drop in building from 2009 until recently means there is a dearth of supply.

COVID-19:  The number of reported cases is 131,401,449 with 2,854,727 fatalities.  In the U.S., there are 30,706,531 confirmed cases with 555,001 deaths.  Both cases and fatalities in the U.S. are declining.  For illustration purposes, the FT has created an interactive chart that allows one to compare cases across nations using similar scaling metrics.  The FT has also issued an economic tracker that looks across countries with high-frequency data on various factors.  The CDC reports that 207,891,295 doses of the vaccine have been distributed with 165,053,746 doses injected.  The number receiving at least one dose is 106,214,924, while the number of second doses, which would grant the highest level of immunity, is 61,416,536.  Around 3 million Americans are being vaccinated daily.  The FT has a page on global vaccine distribution.

China and international news:  A roundup.