[Posted: 9:30 AM EDT] We are seeing weaker equity markets this morning with little news flow.  The Treasury has announced new inversion rules that will likely discourage some of the merger activity.  The Panama papers are also sowing fear in the financial markets.  However, the most likely reason for the weakness is that equity markets are getting a bit frothy. 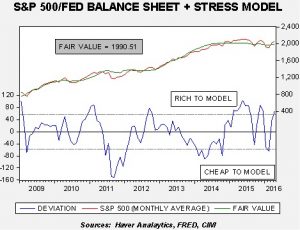 For several years we have noted that the S&P 500 has mostly tracked the size of the Fed’s balance sheet.  Whether this relationship is spurious isn’t completely clear, although we note that the balance sheet also tracks the Shiller CAPE since the bull market began in 2009. 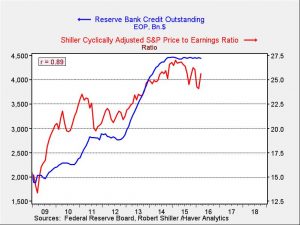 Since 2009, the correlation of the CAPE and the Fed’s balance sheet is nearly 90%.  This would suggest that one of the positive factors from unconventional monetary policy was to lift investor sentiment.  Secular trends in stocks are usually measured around P/Es.  Secular bears usually have flat P/Es while secular bulls have rising P/Es.  The rise in P/Es has led some analysts to declare that a new secular bull began in 2009.  It might be true.  However, we disagree with this assessment because it seems that the expansion in P/Es hasn’t occurred because investors believe their world has improved markedly.  Instead, investors have gotten on board because they feel the FOMC has “got their back.”  Thus, to argue this is a new secular bull market means one believes that monetary policy will always be accommodative.  Simply put, the real test will be how P/Es behave when the balance sheet begins to contract.

So, let’s return to the model chart.  The model uses the Fed’s balance sheet and the St. Louis FRB financial stress index.  Currently, equity markets are “rich” to the model, running one standard error above forecast.  Fair value is 1990.51 based on current values for the balance sheet and financial stress (which is declining).  Overall, this suggests that the equity markets have gotten a bit ahead of themselves and, at a minimum, we should see a period of consolidation.

As equity markets have turned lower, the JPY has been on a tear.  The strength in the Japanese currency has led to a sharp drop in the Nikkei.  If the currency continues to appreciate, Abenomics will be in grave danger of failing (not that it has been a rousing success anyway).  Although BOJ Governor Kuroda has been downplaying the likelihood of further stimulus, the need is becoming rather obvious.  Thus, further negative rates might be possible.  However, the real goal is a weaker JPY; intervention may be the only effective tool left to the BOJ, but intervening in the current political environment in the U.S. could prompt a very negative reaction from the Obama government and will surely be a topic for future candidate debates.

Finally, the FT is reporting that Saudi Arabia is using its clout in the oil shipping business to disrupt Iran’s bid to boost oil exports.  Bahrain and Saudi Arabia have banned Iranian tankers from using their ports or traversing their territorial waters.  The Saudis, who are also part-owners of holding tanks in Egyptian ports, have denied Iranian vessel access.  These moves have slowed Iran’s return to global markets and are bound to increase tensions between the two nations.